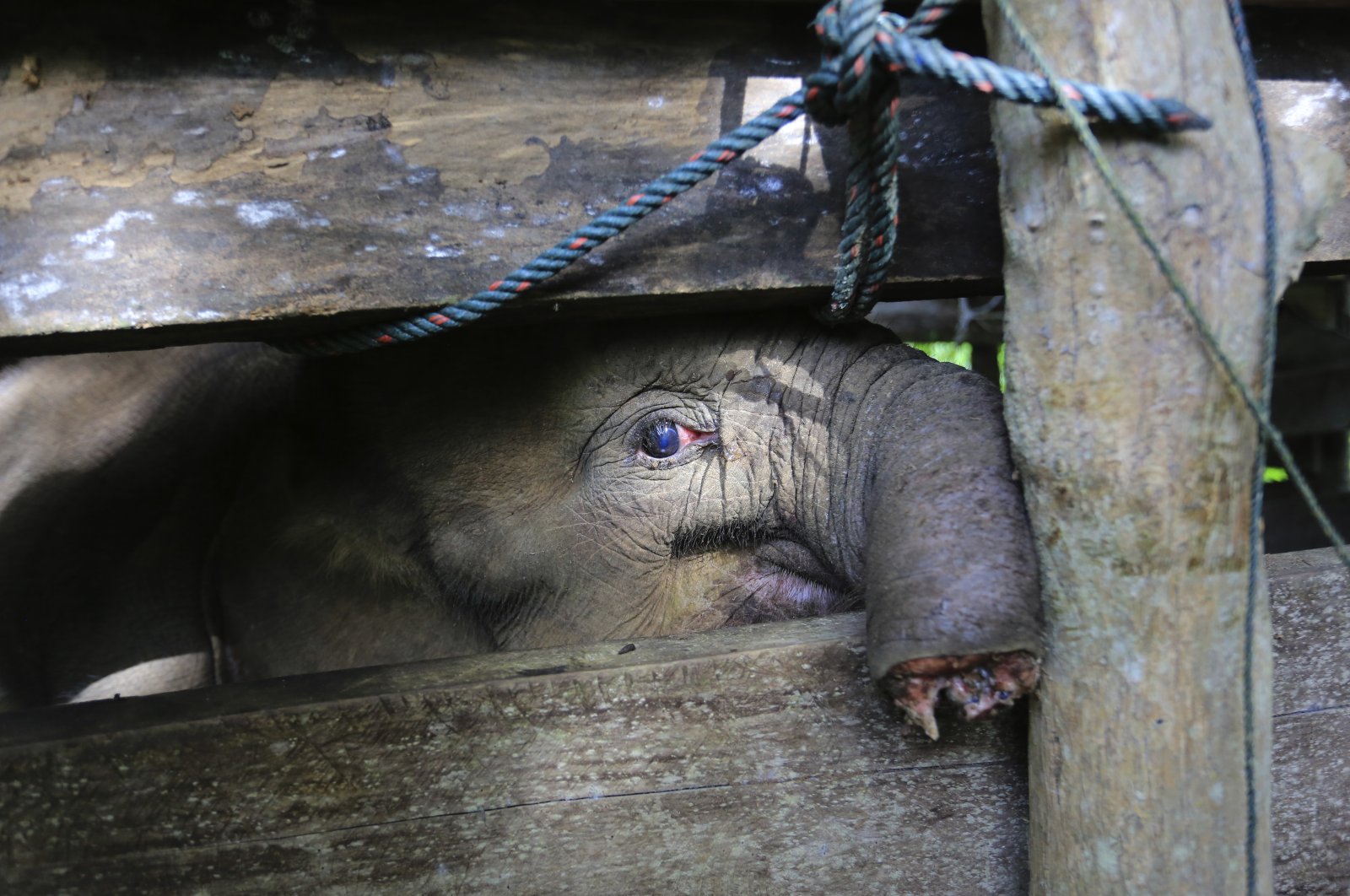 A Sumatran elephant calf that lost half of its trunk, is treated at an elephant conservation center in Saree, Aceh Besar, Indonesia, Nov. 15, 2021. (AP Photo)
by Associated Press Nov 16, 2021 10:36 pm
RECOMMENDED

A Sumatran baby elephant, which had lost half of its trunk after it being caught in a snare trap set by poachers who prey on the endangered species, died Tuesday in Indonesia's Aceh province of its injuries despite efforts to amputate and treat her wounds, officials said.

"We have tried our best, but it can’t be helped either," said Agus Arianto, the head of Aceh province’s conservation agency. "Its trunk was getting rotten and no longer functioning."

The 1-year-old female was among the last of the island’s 700 wild Sumatran elephants. She was found very weak with a snare still embedded in her almost-severed trunk on Sunday in Alue Meuraksa, a forested village in the Aceh Jaya district, according to conservation officials.

Arianto told reporters that an autopsy was underway by a team of vets to determine the causes of the baby elephant's death.

He said that wildlife officials on Monday had to amputate half of the trunk in a life-or-death operation at an elephant training center near Banda Aceh, the provincial capital.

"Her death was shocking ... because she looked fine after being amputated and (was) actively moving," said Rika Marwati, a veterinarian at the center. "She suddenly fell ill from stress and infection late Monday and by morning she was reported dead."

Conservationists say that the coronavirus pandemic has led to increased poaching in Sumatra as villagers turn to hunting for economic reasons.

The number of Sumatran elephants that have died as a result of being snared and poisoning has reached 25 in the past nine years in East Aceh district alone, Arianto said.

In July, an elephant was found without its head at a palm plantation in East Aceh. Police arrested a suspected poacher along with four people accused of buying ivory from the dead animal.

The International Union for Conservation of Nature, or IUCN, has raised the status of the Sumatran elephant from endangered to critically endangered in its 2012 Red List, mostly because of a significant drop in the population as indicated by the loss of over 69% of its potential habitat in the last 25 years – the equivalent of one generation.

Indonesian forestry and environment ministry’s data showed the Sumatran elephant population has shrunk from 1,300 in 2014 to 693, down nearly 50% in the past seven years.