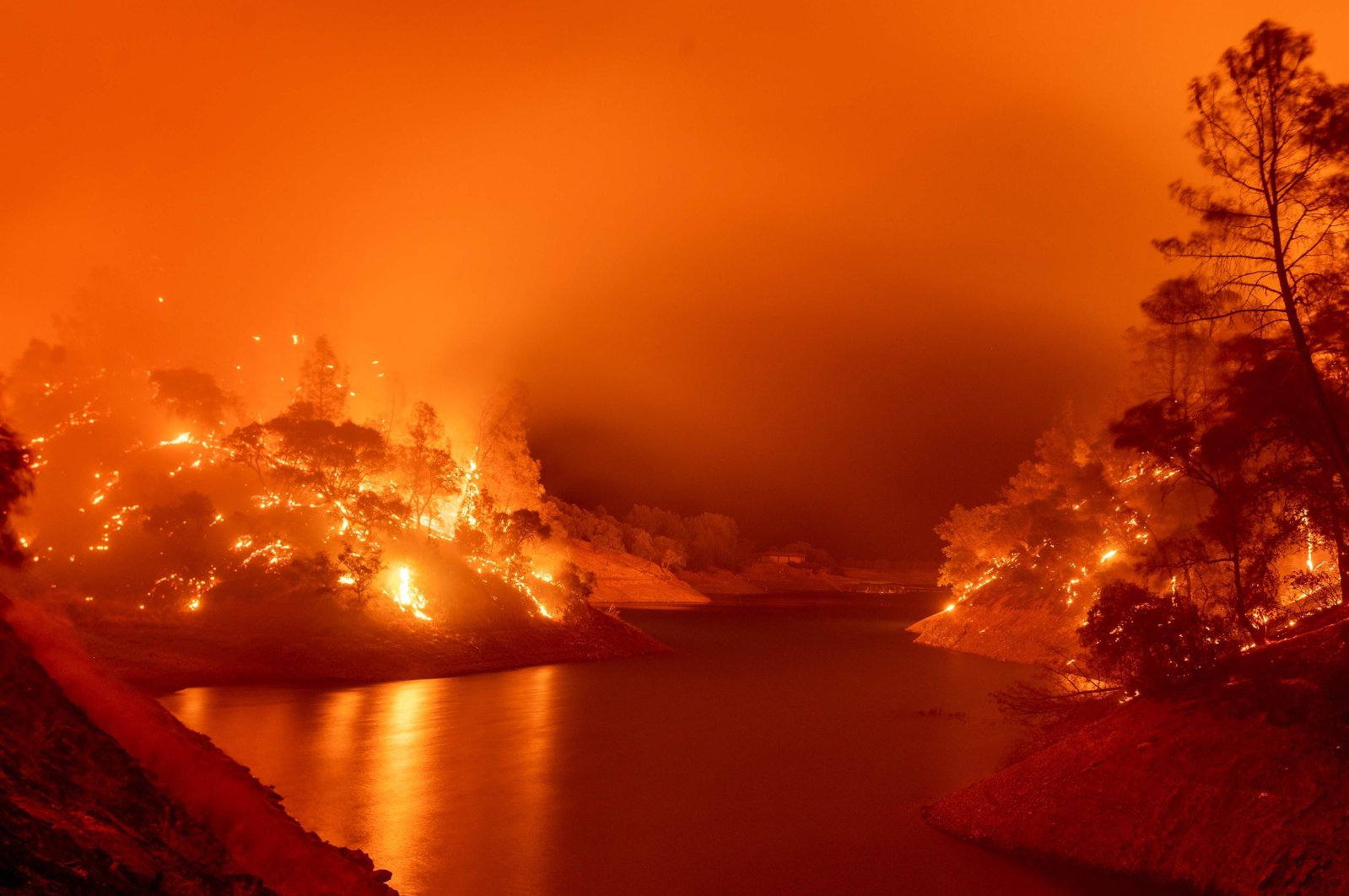 In this long exposure photograph, flames consume both sides of a segment of Lake Berryessa during the Hennessey fire in the Spanish Flat area of Napa, California, U.S., Aug. 18, 2020. (AFP Photo)
by French Press Agency - AFP Jan 08, 2021 10:09 am
RECOMMENDED

2020 has tied 2016 as the hottest year on record, the European Union's climate monitoring service said Friday, keeping Earth on a global warming fast track that could devastate large swathes of humanity.

The six years since 2015 are the six warmest ever registered, as are 20 of the last 21, evidence of a persistent and deepening trend, the Copernicus Climate Change Service (C3S) reported.

Last year's record high – a soaring 1.25 degrees Celsius (2.25 degrees Fahrenheit) above pre-industrial levels – was all the more alarming because it came without the help of a periodic natural weather event known as an El Nino, which added up to two-tenths of a degree to the 2016 average, according to NASA and Britain's Met Office.

"It is quite clear that in the absence of El Nino and La Nina impacts on year-to-year temperatures, 2020 would be the warmest year on record," Zeke Hausfather, director of climate and energy at the Breakthrough Institute in Oakland, California, told Agence France-Presse (AFP).

During an El Nino, which occurs every two to seven years, warm surface water in the tropical Pacific Ocean can boost global temperatures. La Ninas – such as one currently underway – have the opposite cooling effect.

"2020 stands out for its exceptional warmth," said C3S director Carlo Buontempo. "This is yet another reminder of the urgency of ambitious emissions reductions to prevent adverse climate impacts in the future."

A subsequent report from the United Nations' climate science advisory panel, the IPCC, left no doubt that 1.5 C was the safer threshold.

With just over 1 C of warming so far, the world has seen a crescendo of deadly droughts, heat waves, flood-inducing rainfall and superstorms made more destructive by rising seas.

2020 witnessed a record number, for example, of hurricanes in the Atlantic – so many that the World Meteorological Organization (WMO) ran out of letters in the alphabet to name them.

Some regions last year experienced warming well beyond the global average, according to the Copernicus report, based largely on satellite data.

Europe's average surface temperature across 2020 was a searing 2.2 C over the pre-industrial benchmark – and nearly half a degree above 2019, the previous record year.

Warming in the Arctic region was even more spectacular, with northern Siberia and parts of the Arctic itself nearly 7 C above mid-19th century levels.

Wildfires across Siberia lasting well into the autumn released a record quarter-billion metric tons of carbon dioxide into the atmosphere, equivalent to the annual emissions of Spain, Egypt or Vietnam, and a third more than in 2019, the previous record year.

CO2 levels in Earth's atmosphere peaked at 413 parts per million, nearly 50% more than in the early 18th century, before fossil fuel burning began to load the skies with heat-trapping greenhouse gases, C3S reported.

These unprecedented levels were reached despite a 7% drop in emissions due to pandemic lockdowns.

"Since CO2 accumulates in the atmosphere like water in a bathtub, if we turn down the tap by 7%, the CO2 level just rises a bit more slowly," Stefan Rahmstorf, head of Earth system analysis at the Potsdam Institute for Climate Impact Research, told AFP.

"We need to shut off the tap to get a stable climate again," he said.

Global emissions were on a steady upward trend through 2019, and it remains unclear whether humanity will return to "business as usual" or begin to ratchet down carbon pollution quickly enough to avoid catastrophic climate impacts.

Even if all nations fulfill pledges submitted in the annex to the 2015 Paris Agreement, the planet would still heat up more than 3 C by the century's end.

"The world has been warming at a steady rate of around 0.2 C per decade since the 1970s due to human emissions of CO2 and other greenhouse gases," noted Hausfather.