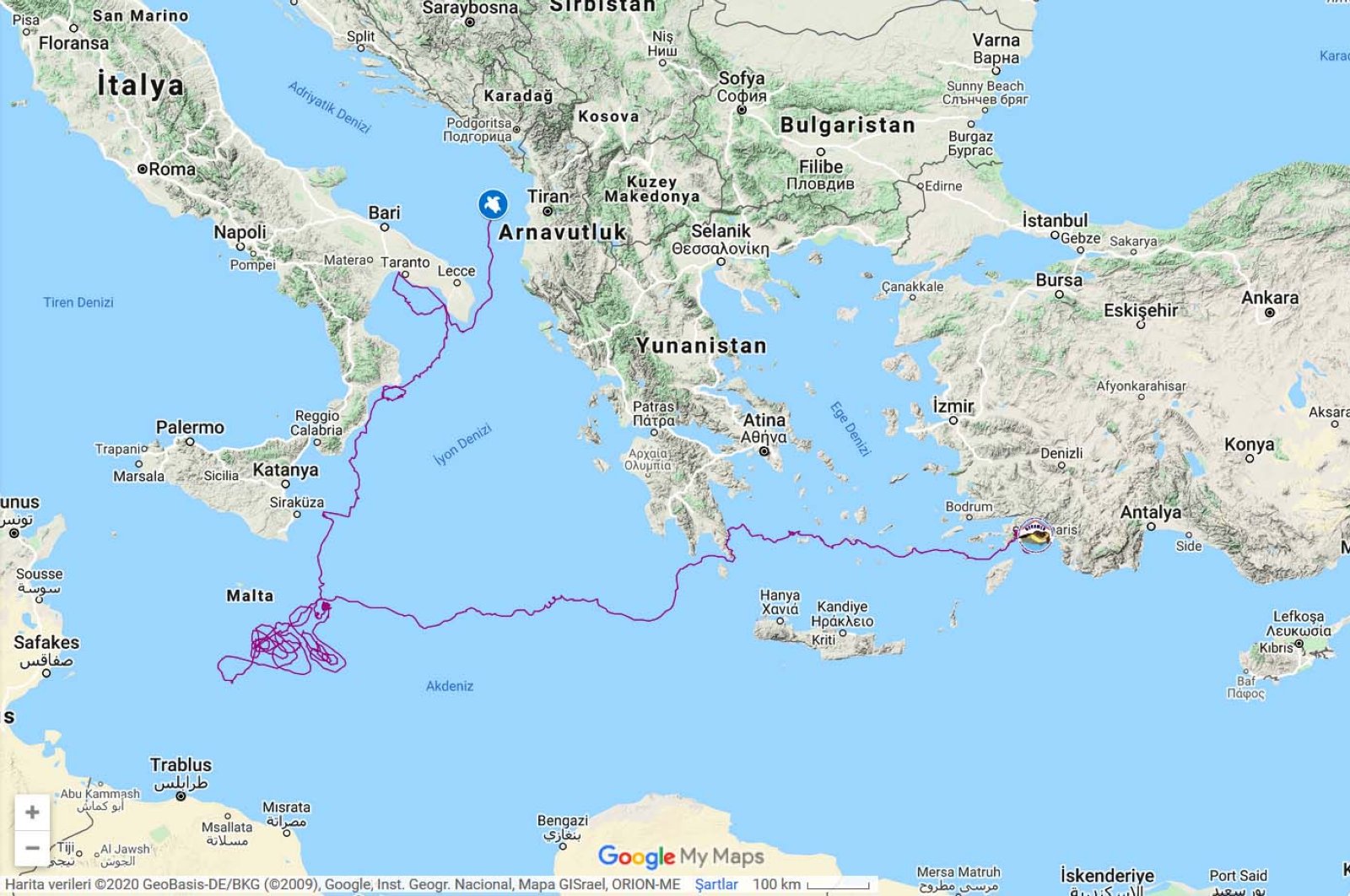 A map shows the route of a loggerhead sea turtle (Caretta caretta) from the town of Dalyan in southwestern Turkey to the Adriatic coast of Albania, as tracked by the Sea Turtle Research, Rescue and Rehabilitation Center and Hospital (DEKAMER), July 20, 2020. (AA Photo)
by DAILY SABAH Jul 21, 2020 9:12 am
RECOMMENDED

Turkish researchers have tracked the 5,500-kilometer (3,417-mile) journey of a loggerhead sea turtle (Caretta caretta) from the southwestern coast of Turkey to the Adriatic coast of Albania.

The female sea turtle, named Tuba, was released last August from the town of Dalyan in southwestern Turkey's Muğla, by the staff at the Sea Turtle Research, Rescue and Rehabilitation Center and Hospital (DEKAMER).

DEKAMER's Scientific Coordinator Doğan Sözbilen told Anadolu Agency (AA) that a satellite tracking device was attached to Tuba's shell at Dalyan's Iztuzu Beach, as part of research on the activities and migration of loggerhead sea turtles.

In recent years, new technology like the tracking devices has shed new light on the underwater lives of these sea turtles, he said.

"It is important to know the location of threats in the sea to protect the sea turtles," Sözbilen explained.

He said Tuba spent two months off Muğla's Marmaris town after her release. "She then moved to the Greek waters in about a month and then to the Balkans ... She spent the whole winter off Malta. Moving to Italy with the arrival of summer, Tuba then moved to Albania after staying in the Adriatic for a month and a half," Sözbilen said.

"So far, she has covered 5,500 kilometers," he added. The researchers hope to continue tracking Tuba's journey, Sözbilen said.

Over the past 10 years, DEKAMER has been open year-round, working on research and conservation efforts. Injured turtles found along the Mediterranean coast are brought to the center for medical treatment and rehabilitation.

There are 21 loggerhead nesting spots in the Aegean province of Muğla and the Mediterranean provinces of Antalya, Mersin, Adana and Hatay. Iztuzu Beach in Muğla is the most popular nesting area for these turtles on the Mediterranean coast and was placed under government protection in 2015.