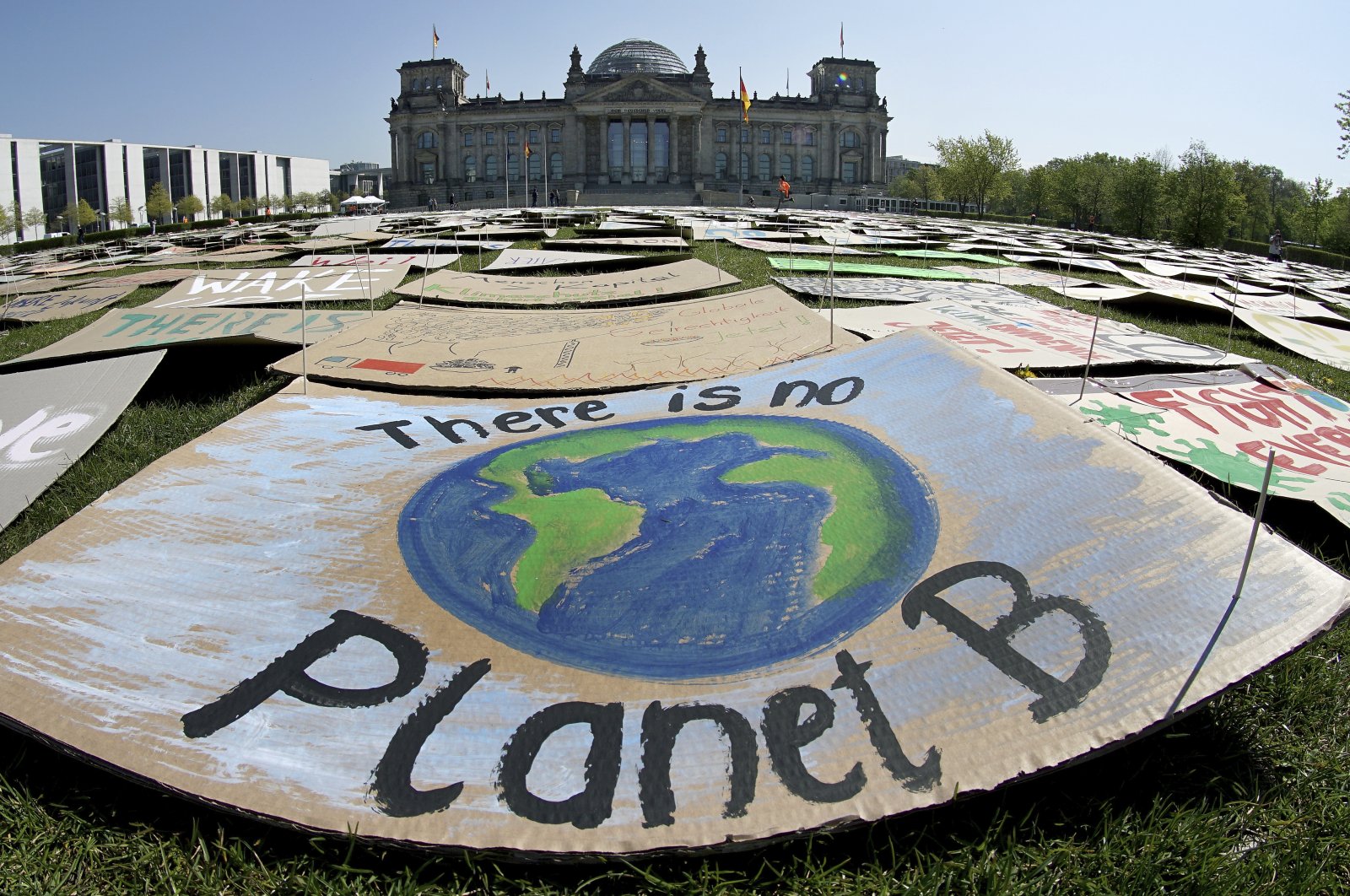 In this April 24, 2020, file photo, activists place thousands of protest placards in front of the Reichstag building, home of the german federal parliament, Bundestag, during a protest rally of the "Fridays for Future" movement in Berlin, Germany. (AP Photo)
by reuters Sep 22, 2020 10:54 pm
RECOMMENDED

Taking better care of nature could absorb many more climate-changing emissions – but will only work if big companies simultaneously slash their own emissions and focus on boosting biodiversity, not just planting trees, scientists warned.

"It's vitally important to understand this potential can only be achieved with rapid and aggressive decarbonization," said Nathalie Seddon, who directs the Nature-Based Solutions Initiative at Britain's Oxford University.

A broad range of companies, including some fossil fuel firms, are now promoting and adopting tree planting and other "nature-based solutions" as a smart and easy-to-grasp way to tackle the twin crises of climate change and biodiversity loss.

More than 560 companies, including giants such as tech titan Microsoft and retailer Walmart, on Monday, urged governments to put in place stronger policies to protect nature and fight climate change, and guide business efforts toward those goals.

Many of the companies, part of the Business for Nature coalition, said at New York Climate Week events that they were pressing ahead with their own green actions, from adopting clean energy to offsetting their carbon emissions by adding trees.

But biodiversity and climate experts warned that in the corporate rush to cut emissions to net zero, too many nature projects are proving ineffective or even counterproductive.

They called for tighter standards to ensure investment goes to what actually works.

In particular, a surge of new tree-planting initiatives will be "hugely problematic" if it drives creation of commercial tree plantations rather than the rejuvenation of natural forests, wetlands and other ecosystems, Seddon told an online event.

"People like trees," the biodiversity scientist said. "You can physically plant them in the ground ... There's a romance around trees."

But just establishing plantations "isn't a climate solution", she said, not least because the trees are often intended to be harvested and used, which can release the carbon they store.

Worsening forest fires, pest plagues and simple neglect also can mean plantations do not last long enough to do the job promised, she and others said.

Seddon called for green investments that focus on restoring land to "what was there before human interventions" and are done with the approval and guidance of local and indigenous people.

The planet's forests and other ecosystems today absorb almost 30% of climate-changing emissions, with oceans taking in another 24% – levels that could grow if natural systems are restored and expanded, she added.

'UP TO OUR EYEBALLS'

Elizabeth Willmott, who leads Microsoft's efforts to become "carbon negative" by 2030 – eliminating more emissions than it produces - said the software giant was sorting through emissions removals proposals and finding the work complex.

The company declared its intention to reduce or offset all of its emissions – dating back to its founding in 1975 – about nine months ago, and is now considering how to do that.

"Due diligence on these projects is an enormous, enormous workload," Willmott said, including finding out if emissions cuts will be long-lasting and whether they can be verified.

With more than 200 proposals in hand, some involving nature-based solutions, "we're up to our eyeballs in documentation," she said.

Microsoft and other companies with climate targets would benefit from a system to provide a strong "seal of approval" for nature-based projects, and would likely ask standards bodies for that guidance, she added.

Richard Black, of the U.K.-based nonprofit Energy and Climate Intelligence Unit, said more than half of the 30 biggest companies with net-zero emissions pledges were relying to some extent on nature-based solutions to meet them.

Only a few have made clear how strong that reliance is, he noted. Seddon said judging how many were adhering to best practices and science was very difficult.

Nigel Topping, Britain's high-level champion for the delayed COP26 climate summit, said pledges to boost nature "can't just be used as a sticking plaster over business as usual" and should follow – not replace – ambitious emissions cuts by companies.

Failing to slash emissions would undermine both carbon offsetting efforts and the natural systems that act as planetary life support, Seddon warned.

"We continue to erode biodiversity at our peril," she said.