Do not miss it: Pacific readies for 'super blood moon' 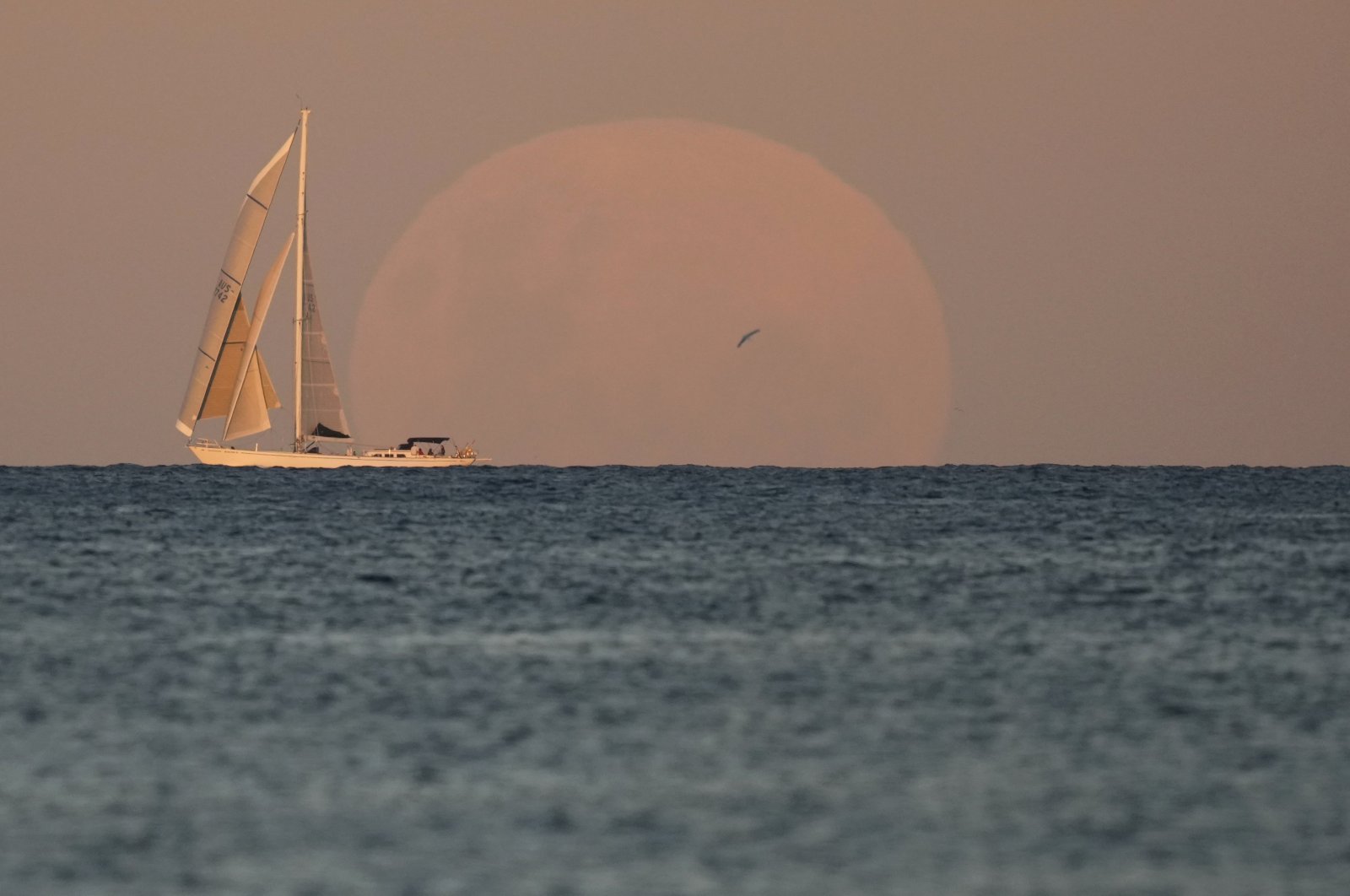 A yacht sails past as the moon rises in Sydney, Australia, May 26, 2021. (AP Photo) A total lunar eclipse, also known as a Super Blood Moon, will take place later tonight during which the moon will appear slightly reddish-orange in color.
by French Press Agency - AFP May 26, 2021 11:41 am
RECOMMENDED

Stargazers across the Pacific Rim are getting ready to witness a rare cosmic event known as a super blood moon on Wednesday night.

The experience occurs when a full lunar eclipse coincides with a supermoon, which is when the moon is particularly close to Earth and appears brighter than normal. For about 15 minutes as it moves fully into Earth's shadow, the moon will appear to turn red.

The first total lunar eclipse in two years will happen at the same time as the Moon is closest to Earth, in what astronomers say will be a once-in-a-decade show.

If the skies are clear, anyone living in the Pacific between Australia and the central United States will be able to see an enormous, bright, orangey-red Moon.

The Moon will darken and turn red – a result of sunlight refracting off the Earth's rim onto the lunar surface – basking our satellite in a sunrise or sunset-tinged glow.

Unlike a solar eclipse, the phenomenon will be safely visible to the naked eye.

"Interest has been high," said Andrew Jacobs, curator of astronomy at Sydney Observatory, who is hosting a COVID-safe viewing event with telescopes and expert speakers. "I'm expecting a clear night."

The event will be live-streamed, and 20,000 users have already registered.

Australian airline Qantas is putting on a one-off two-and-a-half-hour "Supermoon Scenic Flight" that will head east from Sydney over the Pacific for an unobstructed view of the southern sky.

For those content to see the event on terra firma, Jacobs predicted the best view will be in "Australia, New Zealand and large parts of the Pacific. New Guinea also gets a good view."

"The Americas see it in the early morning, but they don't necessarily see all parts of the eclipse," he said.

"Europe and Africa and the Middle East are missing out completely, on this particular one."

According to NASA's Bill Cooke, "folks in Hawaii and the Aleutian Islands will get to see the entirety of this eclipse – it will be quite a show for them."

Lunar eclipses have not always been so warmly anticipated throughout history. In many cultures, lunar and solar eclipses were seen as harbingers of doom.

The Inca believed a lunar eclipse occurred when a jaguar had eaten the Moon. Some Aboriginal Australian groups believed it signaled someone on a journey had been hurt or killed.

In "King Lear," William Shakespeare warned that "eclipses in the sun and moon portend no good to us."

But so far no apocalyptic consequences have been recorded from these celestial shows and, assuming all goes well on Wednesday.

The next Super Blood Moon is expected to take place in 2033.