Enormous 3-meter-long sunfish found off the coast of Ceuta 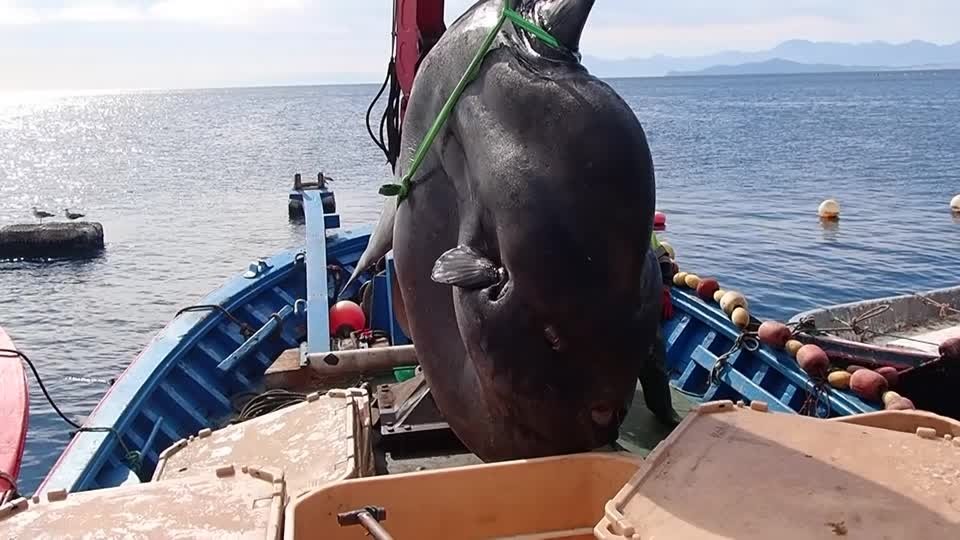 A screenshot from a video shows the enormous sunfish tangled in the nets of a tuna-fishing boat off the Mediterranean coast of Ceuta. (Reuters Photo)
by REUTERS Oct 18, 2021 11:39 am
RECOMMENDED

A record-breaking, huge sunfish was found off the Mediterranean coast of Ceuta earlier this month. Marine biologist Enrique Ostale could not believe his eyes when he saw the animal tangled in the nets of a tuna-fishing boat.

The mammoth sunfish, a species classed as vulnerable and not eaten in Europe, was 3.2 meters (10.5 feet) long, 2.9 meters wide, Enrique Ostale said in an interview on Thursday. The find, which he was called to assess, was a record for the area which, due to tides and sunfish migratory patterns, has no shortage of such encounters.

"We tried to put it on the 1,000-kilogram (2,204.6 pound) scale but it was too heavy. It would've broken it," said Ostale, who heads Seville University's Marine Biology Lab in the Spanish enclave of Ceuta on the north coast of Africa.

"Based off its corpulence and compared with other catches, it must've weighed around 2 tons."

The fish was first isolated in an underwater chamber attached to the boat before being lifted aboard using a crane, where it stayed for a few minutes while Ostale and his fellow biologists took measurements, photographs and DNA samples.

With dark grey skin, rounded grooves in its flanks and a large, prehistoric-looking head, this particular specimen was likely a mola alexandrini, one of the subspecies of the mola sunfish genus, which sports a distinctively stub, scalloped back fin.

"I was stunned. We'd read about such individuals ... but never thought we'd actually touch one, one day," Ostale said.

"But it was also stressful: You're on a boat in the middle of the water, there's a crane moving huge weight, a live animal. We couldn't waste a moment and had to avoid accidents."

But the fish was removed and returned to the water smoothly, both on Oct. 4, to the relief of fishermen and scientists aboard, who watched as the creature vanished swiftly into the 700-meter depths of its home.