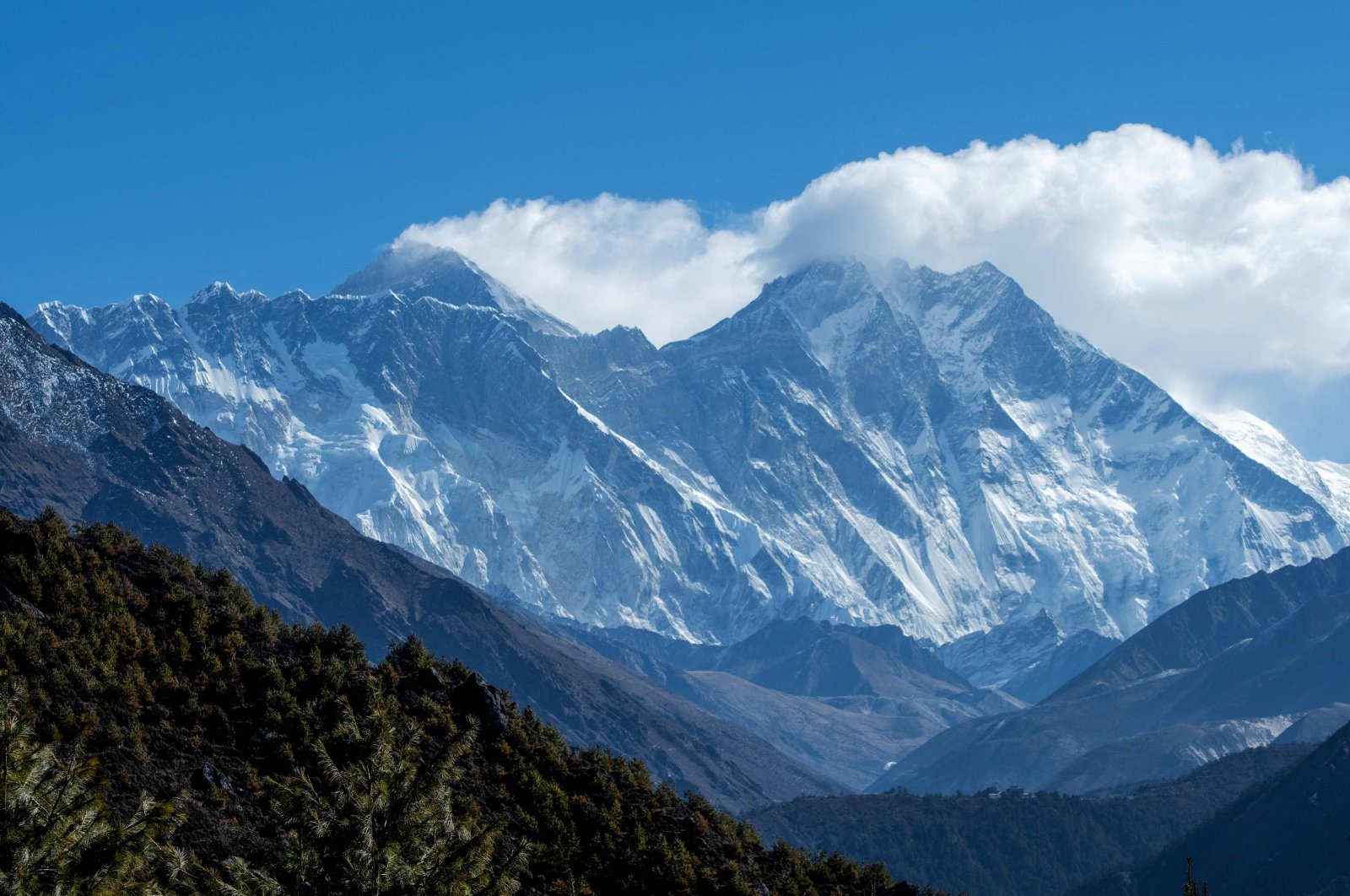 The Himalayan Mount Everest (C-L) and other mountain ranges are pictured from Namche Bazar in the Everest region, some 140 kilometers northeast of Kathmandu, March 26, 2020. (AFP Photo)
by Agencies Dec 08, 2020 3:55 pm
Edited By Yasemin Nicola Sakay
RECOMMENDED

The newly measured height of Mount Everest is 8,848.86 meters (29,031.7 feet), which is slightly more than Nepal’s previous measurement and about 4 meters (13 feet) higher than China’s.

The new figure is expected to put an end to the controversy surrounding the exact height of the highest point in the world.

Chinese Foreign Minister Wang Yi and his Nepalese counterpart, Pradeep Gyawali, simultaneously pressed buttons during a virtual conference and the new height flashed on the screen.

The height of Everest, which is on the border between China and Nepal, was agreed on after surveyors from Nepal scaled the peak in 2019 and a Chinese team did the same in 2020.

There had been debate over the actual height of the peak and concern that it might have shrunk after a major earthquake in 2015. The quake killed 9,000 people, damaged about 1 million structures in Nepal and triggered an avalanche on Everest that killed 19 people at the base camp.

There was no doubt that Everest would remain the highest peak because the second-highest, Mount K2, is only 8,611 meters (28,244 feet) tall.

A Nepal government team of climbers and surveyors scaled Everest in May 2019 and installed GPS and satellite equipment to measure the peak and snow depth on the summit.

Chinese President Xi Jinping visited Nepal later that year and the leaders of the two countries decided that they should agree on a height. A survey team from China then conducted measurements in the spring of 2020 while all other expeditions were canceled due to the coronavirus pandemic.

Nepal's climbing community welcomed the end of confusion over the mountain's height.

“This is a milestone in mountaineering history which will finally end the debate over the height, and now the world will have one number,” said Santa Bir Lama, president of the Nepal Mountaineering Association.

China's official Xinhua New Agency quoted Xi as saying the two sides are committed to jointly protecting the environment around Everest and cooperating in scientific research.

For China, the announcement appeared to be as much about politics as geography. China has drawn Nepal ever closer into its orbit with investments in its economy and the building of highways, dams, airports and other infrastructure in the impoverished nation.

That appears to serve China’s interests in reducing the influence of rival India, with which it shares a disputed border and Nepal’s role as a destination for refugee Tibetans. The Xinhua report said nothing about the technical aspects but heavily emphasized the joint announcement’s geopolitical weight.

China and Nepal will establish an “even closer community of a shared future to enrich the countries and their peoples,” Xinhua quoted Xi as saying.