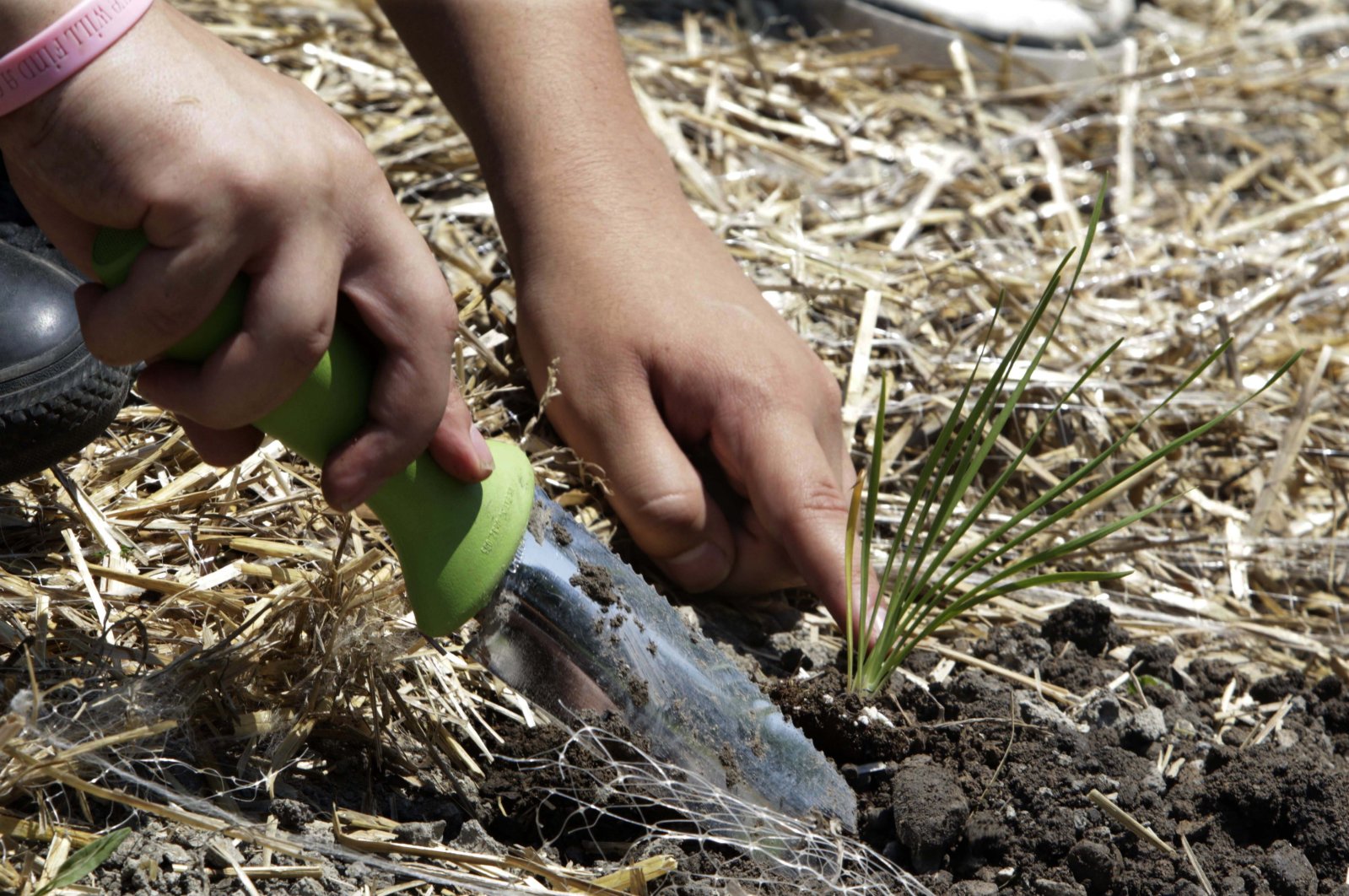 A man puts an onion plant in the ground during a gardening exercise with the American Indian Center in Chicago, Illinois, July 10, 2014. (AP Photo)
by French Press Agency - AFP Jan 08, 2021 7:11 am
RECOMMENDED

An urban farm cultivated on a former landfill site in northern Thailand increased food security and provided livelihoods for poor families during the coronavirus pandemic and can be a model for unused spaces in other cities, urban experts said Thursday.

The farm in Chiang Mai, about 700 kilometers (435 miles) from the capital Bangkok, took shape during a nationwide lockdown to curb the spread of the coronavirus last year when many of the city's residents lost their tourism-dependent jobs.

Supawut Boonmahathanakorn, a community architect who works on housing solutions for Chiang Mai's homeless and informal settlers, approached authorities with a plan to convert the unused landfill into an urban farm to support the poor.

"We had previously mapped the city's unused spaces with an idea to plant trees to mitigate air pollution. The landfill, which had been used for 20 years, was one of those spaces," he told the Thomson Reuters Foundation.

"Poor families spend more than half their earnings on food, so when their incomes dried up, they were struggling to feed their families. This farm has been a lifeline for some of them," he said, pointing to neat rows of corn and morning glory.

Coronavirus lockdowns worldwide have pushed more city dwellers to grow fruit and vegetables in the backyards and terraces of their homes and forced authorities to consider urban farming as a means to boost food security.

In Chiang Mai, after authorities approved the farm plan, an appeal on social media resulted in donations of plants, seedlings and manure from residents, Supawut said.

The land was leveled and rich topsoil added to offset the degraded soil. The farm opened to the community in June.

About half a dozen homeless families, students from a public school and members of the public grow eggplant, corn, bananas, cassava, chilli, tomatoes, kale and herbs, Supawut said.

"In cities, we have lost our connection with food production, but it is a vital skill," he said.

"Urban farms cannot feed an entire city, but they can improve nutrition and build greater self-sufficiency especially among vulnerable people. They are important during a pandemic – and even otherwise," he added.

'An opportunity to be self-sufficient'

Urban agriculture can potentially produce as much as 180 million metric tons of food a year – or about 10% of the global output of pulses and vegetables, according to a 2018 study led by Arizona State University.

Rooftop farms, vertical gardens and allotments also help increase vegetation cover, which is key to limiting rising temperatures and lowering the risk of flooding in cities.

While land in cities is scarce and expensive, rooftops and spaces below expressways and viaducts can be repurposed, said landscape architect Kotchakorn Voraakhom, who designed Asia's largest urban rooftop farm in Bangkok.

"We need imagination and greater flexibility in our laws to turn such spaces into urban farms," she said.

"The Chiang Mai farm is a sandbox – it shows it can be done in even the most unlikely of spaces if the government and the community come together," she added.

For Ammi, a homeless indigenous Akha woman who has lived at the farm since July, the corn, melons and cabbage that she grows have fed her and her husband, and provided a small income.

"It gives people like me an opportunity to be self-sufficient," she said. "We need more such farms in the city."