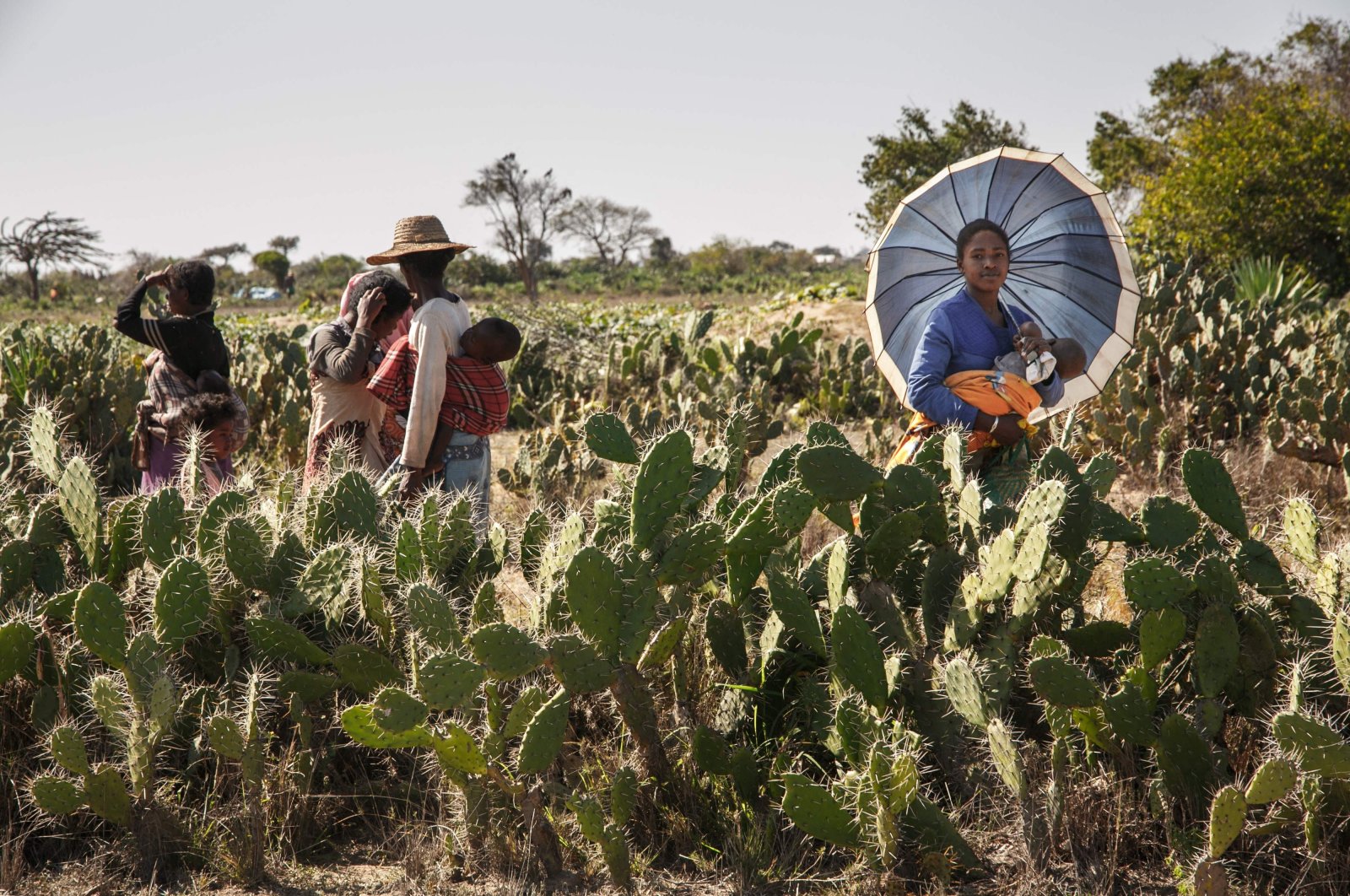 Families of beneficiaries wait outside the Doctors Without Borders (MSF) mobile clinic in the village of Tanarake, Commune of Sihanamaro, Madagascar, Sept. 1, 2021. (AFP Photo)
by French Press Agency - AFP Sep 17, 2021 10:59 am
RECOMMENDED

People in southern Madagascar are facing a drought they have never seen before.

Nothing to eat, nothing to plant. The last rain in Ifotaka fell in May, for two hours.

Across tens of thousands of acres, the countryside is desolate. Harvest season begins in October, leaving long, lean weeks before the meager crops come in.

Some villages are abandoned. In others, people should be working the fields but instead are languishing at home. There's nothing to reap.

Hunger weighs people down, both in mind and body. They move slowly and struggle to follow a conversation.

"I feel sick and worried. Every day I wonder what we're going to eat," says Helmine Sija, 60 and a mother of six, in a village called Atoby.

A petite woman with grey hair and a hardened face, Sija tends a boiling pot of cactus in front of her home. She chopped the pricks off with a machete to prepare them for cooking.

It can't really be called food. The concoction has little nutritional value, but it's a popular appetite suppressant, even though it causes stomach aches.

Her three oldest children have left home to look for work in other towns. She's caring for the young ones.

"I want to move somewhere more fertile, where I can farm. But I don't have enough money to leave," she says.

In Ankilidoga, an elderly couple and their daughter are making a meal of wild herbs, which they season with salt to cut the bitterness. In better times, these were cast off as weeds. But their crops of corn, cassava and sweet potato have failed.

Their village does have a reservoir to collect rainwater. No one can remember the last time it was full.

"I haven't received any aid for two months," said Kazy Zorotane, a 30-year-old single mother of four. "That last time, in June, the government gave me some money." The amount was about $26.

Malnutrition afflicts southern Madagascar regularly. But the current drought is the worst in 40 years, according to the United Nations, which blames climate change for the crisis.

Around the town of Ifotaka, people said the government had brought some rice, beans and oil. But that was in August. Of 500 people designated for financial aid, about 90 received the $26.

Doctors Without Borders has dispatched a mobile clinic to travel from village to village. Children clutch at packets of "plumpy," a peanut butter-flavored paste designed to help the severely malnourished.

Through the waiting crowds, nurses and aides spot the most urgent cases, guiding them to the front of the line. Small children are weighed in a blue bucket.

Measuring tapes are wrapped around their tiny arms, to get an indication of just how acutely malnourished they are.

In Befeno, another village, 9-year-old Zapedisoa came with his grandmother. He's sluggish, his eyes look vacant. At 20 kilograms (44 pounds), he's showing alarming symptoms and is given medicine and food supplements.

Satinompeo, a 5-year-old with short hair, weighs only 11 kilograms. She's severely malnourished, but she's terrified of the doctors. She hangs onto her father's yellow shorts and cries.

Families are sent home with a two-week food supply, based on the number of children in the house.

In Fenoaivo, two sisters and a brother, all retirees, share a home.

"It's been a long time since we grew anything. On good, days, the three of us share a bowl of rice," said Tsafaharie, 69.

At another home in this town, a 45-year-old man holds watch over his father's body.

While it is hard to determine an accurate death toll from hunger, that is why he died in June, his family says.

"We don't have enough money to buy a (cow) to feed mourners, so we can't have a funeral," Tsihorogne Monja said.

The corpse is in a separate hut, partially covered by a cloth.

"My father was very hungry. He ate too much cactus and tuber bark. That's what killed him. It's like he was poisoned."