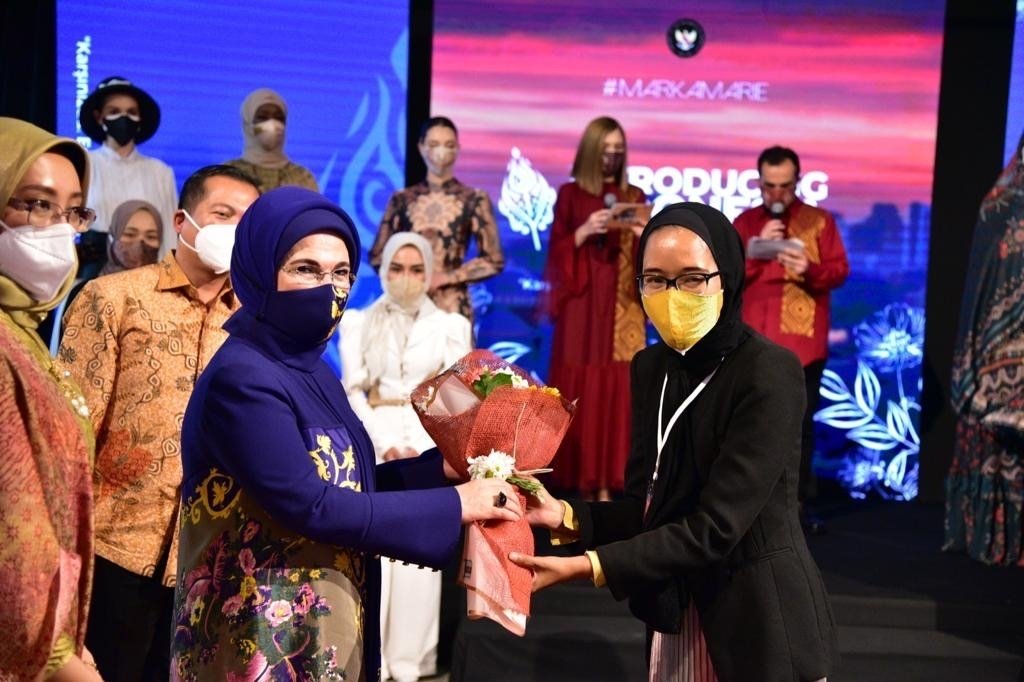 The fashion show, presenting selected Indonesian fashion brands in the heart of Turkey and that has been ongoing on Wednesday and Thursday, was also attended by Turkey’s first lady, Emine Erdoğan, who showed great interest in the various pieces created by the designers. Apart from the first lady, the spouses of Foreign Minister Mevlüt Çavuşoğlu, Parliament Speaker Mustafa Şentop and Industry and Technology Minister Mustafa Varank were also among the guests of the show.

Before the exhibition, a group of musicians put on a musical performance using the traditional Indonesian instrument Angklung, which consists of a varying number of bamboo tubes attached to a bamboo frame. The co-founder of Indonesian clothing brand Markamarie, Franka Soeria, also made a presentation showcasing different types of Indonesian motifs and fabric, including Batik, the art of creating designs on fabric with the aid of wax.

“This is a teaser, so in the near future, we are going to open a showroom for Indonesian brands,” Soeria told the Daily Sabah. “What we bring is ready-to-wear brands, but in the future, we want to have a hub here. The showroom will be opened in collaboration with the embassy and will be in a location where everyone can check and see Indonesian brands.”

“We know how amazing Turkish fashion is, so we wanted to say ‘maybe you will like our fashion too,’” she added.

Soeria underlined that their primary market was Turkey. “After this, we will also go to other countries, but Turkey is our priority due to our (cultural) similarities.”

“Turkey is known for its strong manufacturers and therefore became one of the biggest suppliers of fashion worldwide,” a statement from the ministry said. “Indonesia is known for its progressive move in the modest fashion industry through design innovations and programs.”

“The country has thousands of brands, most of them are focusing on creating covered clothes for a modest look. Events and initiatives in this sector are being launched every day, from one city to another throughout the country,” it added, saying that, however, the pandemic had hit the fashion industry as well, as it did with many sectors.

“If we think that there are two forms of diplomacy – formal diplomacy and informal diplomacy – this is the informal one. Thanks to this fashion show, Turkish ladies are getting to know more about Indonesian culture, ethnic characters, products while on the other hand, we understand more what our sisters and brothers in Turkey like,” Lalu Muhamad Iqbal, the ambassador of Indonesia to Turkey, told the Daily Sabah.

Underscoring that all necessary precautions were taken to ensure the event was safe for all, Iqbal said they had further projects lined up and hoped this event will serve as a platform to initiate business in the area.

The Embassy of Indonesia in Ankara and Markamarie, known as the aggregators of modest fashion in Southeast Asia, aim to establish stronger ties between the two countries through fashion.

Among the seven brands that took part in the show were Elzatta, a pioneer of modest fashion brands with hundreds of stores, Wearing Klamby, a high-engagement brand with 1.6 million followers, and Medina Zein, an urban modest brand led by the famous entrepreneur with the same.

The brands created special collections to be showcased at the event, while invitees had the chance to view and buy the pieces following the show.

As the biggest fashion markets in the Muslim world, Turkey and Indonesia could provide vast opportunities for collaboration and joint ventures in design and textiles.