6 reasons to eat homemade yogurt every day, plus some classic Turkish recipes 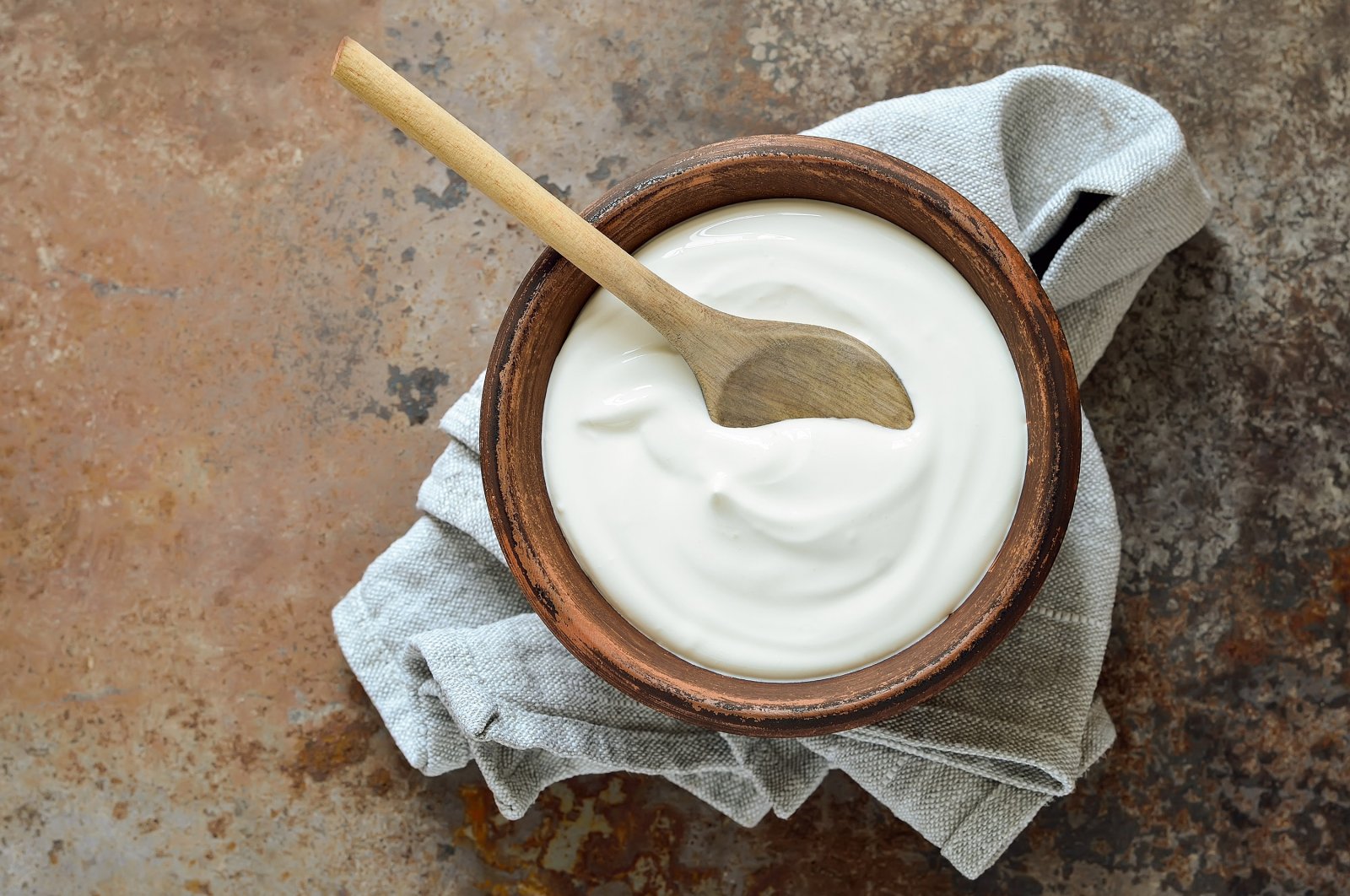 Many Turks would insist yogurt tastes best when it is made in earthenware pots, as per tradition. (Shutterstock Photo)
by Ayla Coşkun Jan 17, 2021 1:30 pm
Edited By Yasemin Nicola Sakay

Delicious, creamy, gut-loving. Yogurt has long been a part of Turks' diets and recommended by doctors left and right for bone strength, gut health and weight management. But how can you make your own at home? Let's take a look

Turkish cuisine is unthinkable without yogurt. It is a great pairing for almost every dish, and if the meal doesn't already contain yogurt, it is usually served in a small bowl to accompany meals. Cacık dip (or as the Greeks call it, tzatziki) and ayran, a savory yogurt drink that is a staple alongside sodas at every restaurant or fast food joint, are just two of the most widely known Turkish yogurt creations.

As refreshing as yogurt is, especially in the hot summer months, it is much more than that. Thanks to its probiotic-rich nature, it has countless health benefits.

In fact, doctors recommend anyone experiencing problems in the gut – be it cramps, bloating, diarrhea or constipation – get in the habit of consuming yogurt on a daily basis to balance out the good bacteria in the intestines. Yogurt also contains high amounts of protein and riboflavin (vitamin B2), which our bodies need for growth, folic acid to help produce healthy red blood cells and calcium to build and maintain strong bones and teeth, says Internal diseases and nephrology specialist Tevfik Rıfkı Evrenkaya, stressing that all of these collectively support our immune system to fight off diseases, especially in times of COVID-19.

However, just because yogurt is scientifically proven to aid health does not mean all brands and products are created the same. Evrenkaya advises people to avoid the sugary versions sold in shops and instead turn to plain and probiotic-enriched yogurts. If the urge hits for something sweet, fruit and honey not only make a great sweet addition but also give an added bonus of vitamins and antioxidants. Evrenkaya also pointed out that yogurt is a great source of vitamin D, which plays an important role in our bone and muscle health and regulating our mood. With shorter winter days and more time spent inside due to lockdown, vitamin D deficiencies are on the rise. So eating a cup of yogurt a day could help you boost levels of the sunshine vitamin in your blood.

How to make yogurt at home

Our ancestors likely created yogurt by accident while storing milk in animal guts. The word "yogurt" itself is of Turkish origin and comes from the old Turkish "yogur", meaning "to combine" or "thicken." The word was first recorded in the Buddhist drama Maitrisimit as yogurt and later surfaced in its Old Uighur translation as well before spreading across the globe.

Though its etymological history is long and much more complex, making this food item is not as hard; one just has to be mindful of the ingredients.

The milk: Unfortunately, you can’t pick up the pasteurized variety you use in your coffee from your nearest supermarket, as that will not have the good bacteria needed to make yogurt. The milk needs to be unpasteurized and luckily, you are likely to find it in health shops or even at some bakkals (Turkish small neighborhood shops), which tend to have regular visits from the local milkman on certain days.

With the milk sorted, now you'll need the heart of the recipe.

The yogurt culture: If you like more mildly flavored yogurts, you can actually use a bit of your preexisting yogurt to ferment the milk. Yet, this will prove a challenge if you are not living in Turkey. I remember vividly how my mother tried to do the same in Germany 20 years ago, but apparently, the ones sold there were so "unprobiotic" (meaning no live cultures) that the milk couldn’t react to it. Only one specific yogurt from the local “Turkish” store did the trick. To make sure your yogurt has the necessary cultures you are looking for, make sure it is labeled as probiotic, which means it will be on the pricier side but will be a one-time purchase.

Some specialty stores may also directly sell the cultures themselves. If they give instructions, you should probably stick to those instead of the ratio I’ll be providing here.

If you are accustomed to the Turkish way of life and have strong neighborly connections, you can also ask them for a cup or spoon of yogurt. I knew my neighbor had some super sour yogurt, which is perfect for making ayran, so I asked for a bit, and they happily gave some. Of course, with such intense flavors, you can use even less to add to your milk. My grandmother always says that even the tip of a knife can be enough to make yogurt – though her cultures were always the most sour of all.

Heat the milk to about 45 to 50 degrees Celsius and take it off the stove. Stir in the yogurt or yogurt culture and keep this mix at a steady temperature for at least four to five hours and about a maximum of 12 hours. I usually let it rest overnight.

There are a variety of ways to keep the temperature stable. Keeping the pot without its lid in the oven set at around 45 degrees or so is one way to go about it. Nowadays, there are yogurt machines in the market that keep it at the right temperature for you. But the easiest and most DIY way to keep the heat is by placing the pot onto a blanket, closing off the lid and folding the blanket over and around the pot. It might look a bit unsightly, but it is tried and true.

After the resting time is over, you’ll likely want to dig in immediately, but a little more patience is required. Letting the yogurt rest for another 24 hours in the fridge will “cure” it and make it its absolute best.

You can use a variety of containers to make your yogurt, not just your regular old pot. Sturdy yogurt boxes have been reused that way in our household, with many a guest not believing we made the yogurt ourselves. Tupperware boxes also work. Some people also swear by ceramic or porcelain to get the best flavor.

The creamier kind of yogurt that is often confused with the Greek kind sold mostly in the U.S., süzme yogurt, or as the Aegeans may call it "kese yoğurdu," is yogurt that has been strained, making it the thickest version of Turkish yogurt out there. You can achieve that kind of consistency by mixing 1.5 teaspoons of salt into the resulting yogurt and putting it into a cheesecloth, in Turkey called a “tülbent.” Hang the yogurt over a bowl and let the excess whey drip off for a few hours. Once you are satisfied with the thickness, put it back into your container of choice for a truly creamy and luscious yogurt.

There are soups and many other Turkish dishes made with yogurt, but the following are absolute staples of Turkish cuisine: ayran and cacık. The third one is haydari, a yogurt dip, usually adorning the meze tables.

This quintessential Turkish yogurt drink goes with pretty much any food. There is a very frothy version, famously called "yayık ayranı," but the drink is the same. Get equal parts yogurt and equal parts water and mix those two together. Salt it to your taste, and you are done. You can make it for the whole family or just a glass for yourself. To make it even more refreshing and interesting in taste, you can use mineral water instead of plain water. Sprinkling some mint on top is also a cooling addition.

This dish/meze is one of those sides that you could easily eat on its own as a cold soup of sorts with just a bit of bread in summer. Some people like to cut the cucumbers into small pieces while others slice or grate them – do whichever way you like it.

Wash well and preferably peel the cucumbers in a striped manner and cut finely, cube or grate them. Chop the dill and the garlic very finely and add all into a bowl, adding all the other ingredients except the water. Gradually add the water until you achieve your desired consistency. Serve with a dash of olive oil and a pinch of mint on top.

This dish is my absolute favorite; it's a dip that goes with every snack you can think of and should be seen on every meze table. It also goes so well with chips that it is hard to stop. This version has a few twists from the traditional recipe, namely cheese, mint and walnuts, but it is a great way to experiment.

Put the feta into a bowl and mash it as finely as possible with a fork. Add the yogurt and mix it until the cheese is distributed evenly. Crush the garlic with some salt, chop the dill finely and add it to the yogurt mix. If you want to add walnuts on top saute them with olive oil in a pan and add the mint to it as well. If you do not want to add walnuts, just sautee the mint with the olive oil and mix it into the yogurt. Stir well and enjoy.