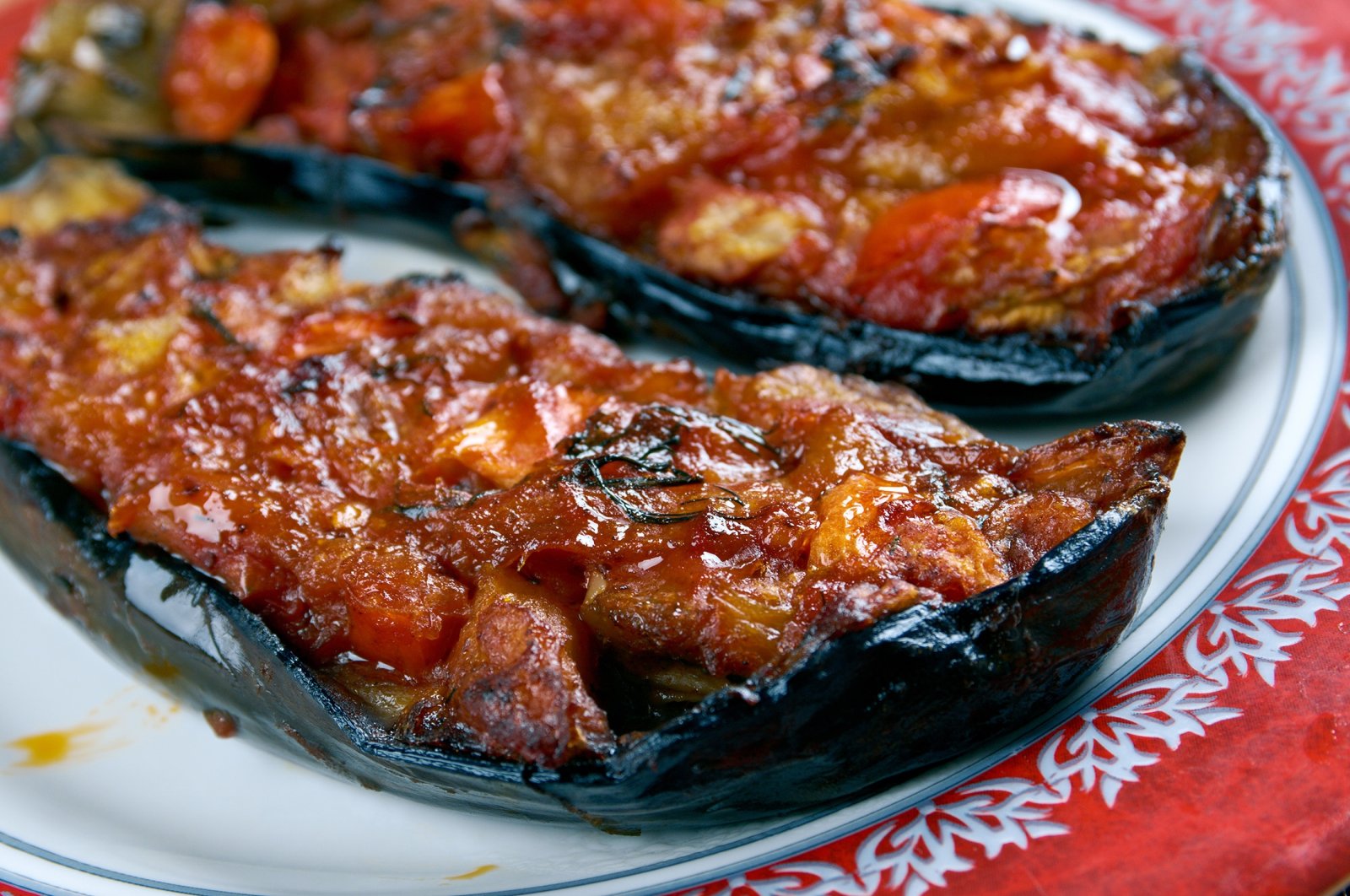 Most anyone visiting Turkey will admit that one of the greatest highlights of dining is the vast array of delicious eggplant dishes on offer. (Shutterstock Photo)
by Leyla Yvonne Ergil Aug 03, 2022 10:30 am

Most anyone visiting Turkey will admit that one of the greatest highlights of dining is the vast array of delicious eggplant dishes on offer, and so, I have deciphered the intriguing names of the cuisine’s most prominent eggplant dishes and prepared a guide on this Turkish kitchen staple

The eggplant can be a dark and mysterious vegetable for those less familiar with Mediterranean and Middle Eastern cuisine. But here in Turkey, the culinary tradition is a culmination of the many other cultures that have long been minority communities in the country, yet their cuisine has had a major impact.

"Karnıyarık" is perhaps the most popular eggplant dish in Turkish cuisine and can serve as a main course, especially if accompanied by rice and a dollop of yogurt on the side.

The dish consists of a roasted whole eggplant that is split in the middle and stuffed with a mixture of sauteed chopped onions and garlic, tomato and red pepper paste, diced tomatoes, green pepper, parsley and the star of the show, which is ground lamb meat.

"Imam bayıldı" is a similar dish in all intents and purposes with the exception of the addition of meat. This is an entirely vegetarian dish that is served up at room temperature and has a heavier helping of olive oil.

The most widely available eggplant dish in Turkey is hands down "kızartma." The name simply refers to the style of the vegetables' preparation, which is sliced and fried and generally includes a medley of potatoes, peppers and eggplant.

It is usually served with a scoopful of yogurt, either plain or mixed with garlic, and can be served cold.

In the Aegean region, you may come across a similar dish by the name of "yoğurtlama," however, in this case, yogurt is poured over the top of the fried vegetables and a rich tomato and pepper oily sauce is drizzled over the top.

Hands down the fanciest eggplant dish in Turkey, and one popular since the Ottoman era, is "hünkar beğendi" – a main course in which cubed meat adorns a bed of smoked and pureed eggplant that is thickened with a bechamel sauce.

A similar variation is "alinazik in which case, the bed of eggplant adorned with cubed meat consists of the pureed smoked pulp, crushed garlic and yogurt.

In the Turkish kebab dish featuring eggplant and aptly titled "patlıcan kebabı," round slices of eggplant are layered in between spiced ground beef patties and grilled over an open flame.

"Islim kebabı" has a similar patty of spiced ground meat that is wrapped into a bundle with long, thin slices of eggplant and is baked.

While Turkey does have a dish called "musakka," it can differ greatly from it’s Middle Eastern and Greek counterparts. Musakka in Turkey is basically like a ratatouille of vegetables with the addition of spiced ground meat. It is rare, though not unheard of, to find variations with layers of bechamel and melted cheese.

One of the areas eggplant dishes shine in Turkish cuisine is at picnics, potlucks and parties as mezes. The combination of diced smoked eggplant with roasted red peppers, onions and garlic in a dressing of olive oil and lemon juice is simply referred to in Turkish as "patlıcan salatası," which means as it sounds like "eggplant salad."

"Yoğurtlu patlıcan" is another popular dip-like dish simply consisting of smoked eggplant mixed with yogurt and garlic, but the taste is truly divine. Add tahini to the mix and you have "mütebbel," which is more familiarly known as a Middle Eastern eggplant dip.

While the Middle Eastern variation of "baba ghanoush" also incorporates tahini, here in Turkey, the dish of the similar name "babaganuş," takes a Turkish twist, consisting of cubed smoked eggplant mixed with tomato and pepper pastes and mixed in with finely diced tomatoes, red and green peppers, onions and garlic.

"Şakşuka" is one of those mezes that will be available almost everywhere mezes are served. And thankfully so as it is a scrumptious medley of fried cubed eggplant, potatoes and peppers in an oily tomato-based sauce, while "köpoğlu" is a mixture of the same painstakingly cut and fried vegetables but in this case, they are doused in a sauce of garlic yogurt.

Last, but certainly not least, this section is devoted to the places reserved for certain eggplant products in the Turkish pantry.

You may have seen the long strands of hollowed out and dried halves of eggplants and thought they were some sort of colorful decoration but you would be wrong as those dried cups of eggplant skins are actually used as vessels to be filled with a rice stuffing of sauteed ground meat, onions, garlic and tomato paste.

Households will either take the time to scoop out the eggplant when it is in its prime season, which is now, and they will hang them up to dry. When prepared they become the most wonderfully soft and flavorful casing that contributes to the entire flavoring of the "patlıcan dolma," i.e. "stuffed eggplant" dish.

Ajvar, as the name suggests, is a Balkan breakfast dip that while not originally Turkish, but it can be found on any shelf of dips and pastes that are a regular part of Turkish breakfast. This savory dip consists of mashed or pureed smoked eggplant and roasted sweet peppers.