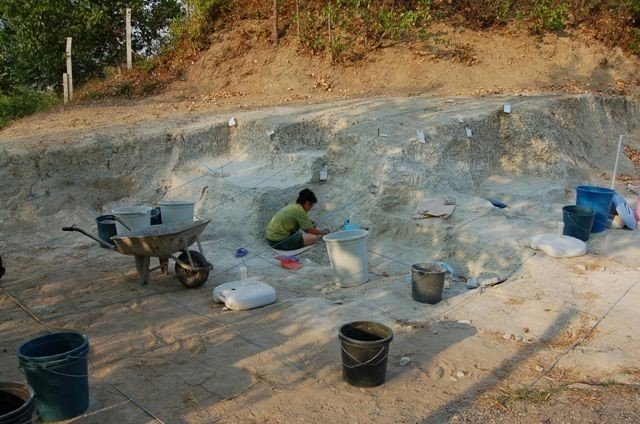 Luck is a funny thing, sometimes you have to be at the right place at the right time. A shepherd discovered a cave after a landslide revealed an entrance in the Mustafakemalpaşa district of Turkey's Bursa, and as luck would have it stumbled upon a dessert estimated to date back to around 10,000 B.C.

The food managed to survive for 12,000 years without spoiling thanks to the resin and calcium carbonate, with which it was covered. Meanwhile, experts pointed out the striking resemblance it bore to a local modern-day dessert called “Mustafakemalpaşa Cheese Dessert.”

The cave where the delicacy was found also featured ancient cave paintings and kitchen tools including pottery items all believed to be 12,000 years old, sparking excitement among the locals.

So, what is in the dish? Experts concluded that the treat was made with wild wheat, plant root and a substance similar to milk, and describe it as an ancient iteration of the Mustafakemalpaşa cheese dessert.

The items found in the hitherto unknown cave proved to be invaluable as experts guess they could help rewrite facts about nutrition and cuisine culture.

Meanwhile, the Mustafakemalpaşa district still hosts the largest number of buffaloes in the region, although they are much lower in number. The dessert takes its name from the district because it is made with the cheese produced from the milk of the buffaloes of the area.

First examinations of the ancient art on display on the cave walls revealed that they were well preserved and clean despite thousands of years without light. The paintings depict the hunt for an animal similar to a buffalo or a cow and subsequent domestication efforts.

The bowls, pots, stirrers and kitchen utensils found in the cave have been taken under examination.

Mehmet Kanar, mayor of Mustafakemalpaşa, said that the area was put under protection and detailed information would be given at a later date but added that the first impressions were enough to get them excited.

The elephant in the region

The Mustafakemalpaşa district shares a shore with Lake Ulubat, formerly Lake Apollyon, and is the most productive agriculture and livestock center in the region. It is also home to over 100 caves, large and small.

The district hosts a number of ancient artifacts and archaeological excavation sites, the most significant of which is the Paşalar dig, in the Paşalar location of Mustafakemalpaşa.

The largest elephant fossil in the world, called Paşa Elephant (Gamphotherium Paşalarensis), was discovered during this dig and still stands as the only one of its kind to this day.

The excavations are led by professor Berna Alpagut, from the paleoanthropology department of Ankara University's faculty of language, history and geography, and they have been carried out for many years by the Ministry of Culture in cooperation with British and Finnish natural history experts and researchers from various universities in the United States.

The ancient artifacts discovered in the region called “Gönen Çanağı” (Gönen Bowl) which encapsulates Mustafakemalpaşa as well, date as far back as 15 million years.

Scientists note that the calcium carbonate deposits in the abundant marble beds in the region coupled with forests dense in terms of resin, have been important factors in hardening fossils and making them durable.