Every bite a blessing: Cuma in Çukurcuma 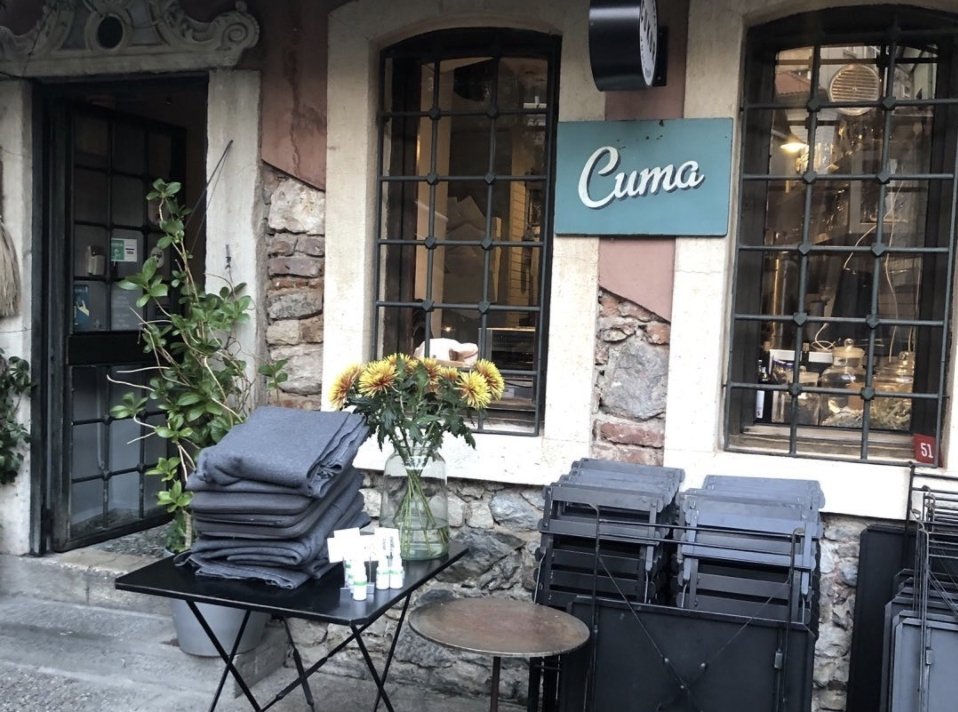 Cuma offers a variety of great food for its visitors. (Photo from Instagram / @cumacukurcuma)
by Matt Hanson
Oct 06, 2021 9:23 am

In the shadow of Muhyiddin Molla Fenari Mosque, a stone terrace is dimly lit in the evenings, welcoming urbanists and culturati to a fount of culinary treasures, as its kitchen whips up a proud variety of dishes

The fusions of Turkish cuisine are not only appreciated within the bounds of restaurants but in the total ambiance of life in Turkey as it blends into various spaces, carried by pervading sounds and smells – some delicate, others harsh – but all resonating like a chorus of perceptions.

At the root of its allure is a conscious plurality, one that drives public awareness with unmistakable if inescapable grab, within its local spheres of influence. That is the essential crux of urban living – the melting pots and multicolored mosaics, the assemblages of people and their customs that define and glorify the reason for being in a cosmopolitan metropolis.

With its name signifying Friday, and with connotations of the Islamic sabbath prayer, mixed with that of the quarter, “Çukurcuma,” the bistro Cuma and its in-house food shop, aptly titled, “Çukur,” offer a trove of understated yet impeccably prepared, tasteful recipes.

Surrounded by antique shops, sharing its grounds with part of a mosque, Cuma is an admirable experiment in the integration of Istanbul’s downtown neighborhoods as they are increasingly gentrified. The architecture of the place appears to as carved out of a slew of artifacts at any of the neighboring antique collections, which house related stonework.

Cuma welcomes its linguistically diverse, international patronage with freshly baked sliced bread and an oily, red dip. The menu begins with ingredients that come together for tantalizing, and substantial variety of delicacies, such as its broad bean and glasswort bowl, pairing a smooth, savory mound of the pureed hearty legume with a decorative and nutritious topping of either a warmed cauliflower stalk, or the succulent marine herb that is a favorite in Turkish taverns during the summer.

Towards a palatable seasonality

As the weather cools and cravings mount in search of comfort foods, Cuma’s appetizer of Georgian dumplings in a rich sauce with a salty Antakya yogurt base is a perfect invitation to cozy up during the long winter nights. The cooking at Cuma delights in commingling the exotic with the familiar. Its pizzettas are thin-crusted masterpieces of subtlety. The vegetarian version melts its texturally refined layers of cheeses into slivers of carrot and scattered bunches of cauliflower heads. And under the tawny yellow lights, strung over the large stone tiles of the ground-floor terrace, the atmosphere is nourishingly romantic.

Indoors at Cuma, a narrow staircase leads to a comfy cafe, complete with soft couches and broad tables. Down a hallway, aromas from a lively kitchen waft through the corridors as the work of its chefs hum with the clank of metal and the hiss of steam. A wall displays a healthy assortment of natural goods, jarred and bottled, purveying an organic assortment of wholesome products – from elderflower syrup to specially procured tahinis and honey that seem to grace the plates of their finest dishes.

There is something of a drawback to the cultural outreach of their menu, which while staying true to the regional wonders of the Turkish countryside, also extend farther afield to Mexico, for instance, with their veggie tacos, accompanied with generous quantities of avocado, green lentil, beet, cilantro and turnip.

Although the menu has changed, in the past Cuma also served a vegan curry with seasonal vegetables on jasmine rice. But these distant culinary traditions are difficult to meld with formidable Eastern Mediterranean cookery.

Out in the open and dining

The specific, almost aesthetic, attention to the house quality of their ingredients is what makes Cuma unique in its allure. There is an overall sense of substantiality in their bread, cheese and sugars as a world-class bakery in their own right, claiming the tongues of classy types painting the town, dining before they saunter off in search of play and diversion among the theaters and bars, cinemas and auditoriums that dot the interior cityscape in the neighborhoods around Çukurcuma between Taksim and Cihangir.

Cuma maintains a homely character in its outdoor terrace, walled in by tall plants and frequented not only by the hungry but the prayerful. The spectacular diversity of its menu is a testament to the surprising versatility of Turkish cooking in Istanbul, where a quiet cafe off the beaten path bears the charm and sophistication of skilled cooks, whose touch might rival that of any restauranteur around the globe. Despite the rising living costs in Turkey, where such establishments as Cuma have upped their prices in the last year, the fare and the accentuated flavors of its setting are reason enough to embrace its casual exceptionality.