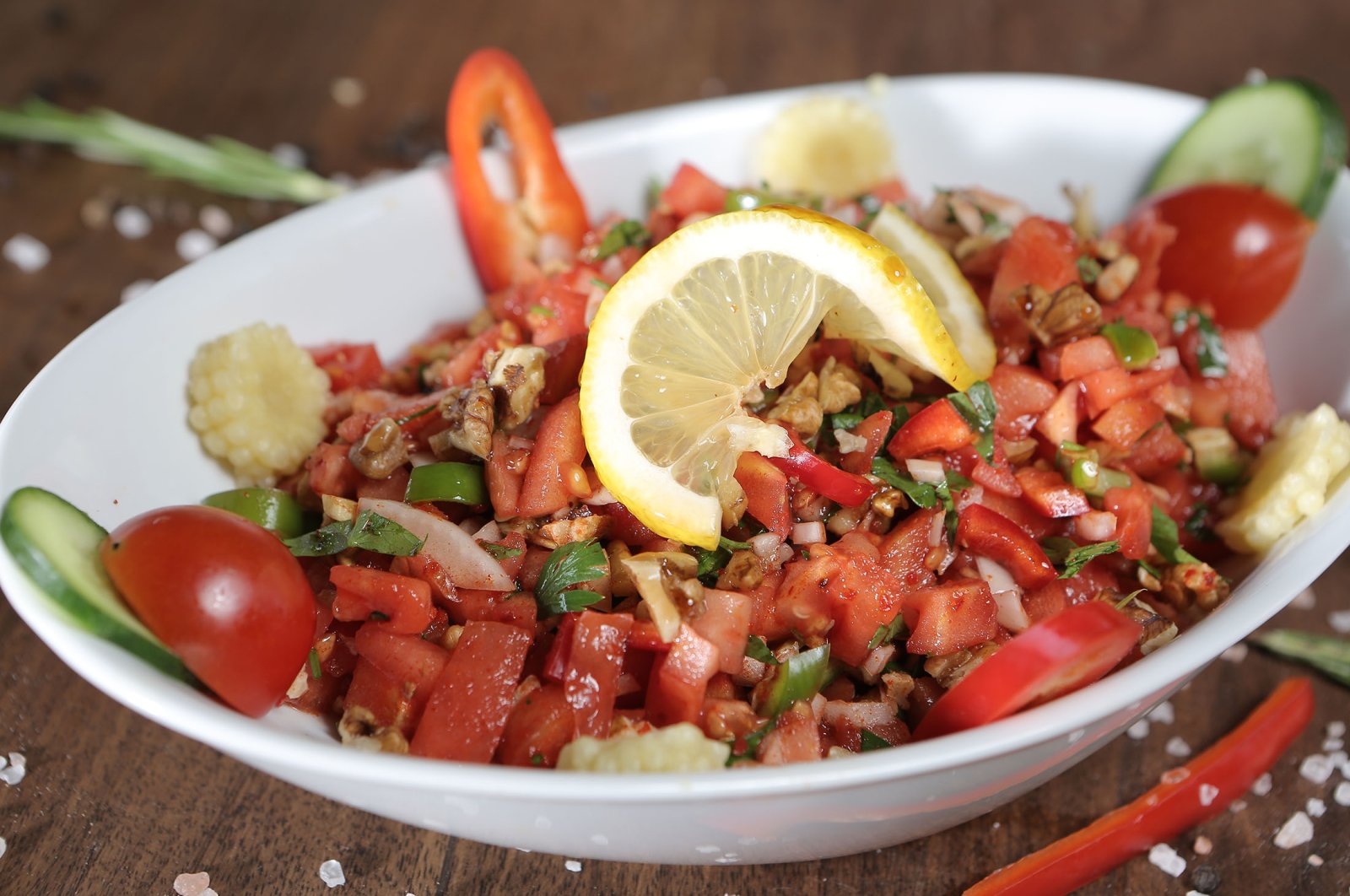 Ever wonder what the healthiest meal in Turkey is? Well, luckily it is the Turkish salad bar, a refreshing yet lesser-known luxury that happens to exist in nearly every town, highway and bus stop in Turkey

Let’s face it; we are all trying to eat healthier and incorporate more vegetables and grains into our diets. And, if we aren’t yet, we should be. Studies show the best diet in the world for weight loss and mental health is the Mediterranean diet and, luckily for us, Turkish cuisine is its epitome. This means that leafy greens, seasonal vegetables, pulses and grains are coupled with healthy proteins and fats such as nuts, olives and cheese, with fruit also playing an important role in the daily diet.

The true array of Turkish salads may admittedly be less evident to the foreign eye, which may only catch glimpses of Turkey’s basic seasonal “mevsim” and shepherd “çoban” salads, the former being a leafy green salad with grated carrots and pickled purple cabbage and the latter consisting of a chopped up combination of tomatoes, cucumbers, onions, peppers and parsley. Despite the inclination to think the Turks would have their own variation on the “Greek salad,” finding sliced feta cheese in a salad is surprisingly rare in more traditional restaurants in Turkey, as it is generally consumed on its own as a form of meze. Another popular salad in Turkey is “piyaz,” which is basically the shepherd’s salad with white beans added as a major component.

I bet you didn’t know that the best salad bars in any town in Turkey can be found at meatball restaurants. Yes, it’s true! The special Turkish meatball called “köfte” is customarily served alongside piyaz and thus somehow, the chain restaurants that specialize in meatballs happen to have the best selection of Turkish salad bars on offer. Luckily for us, these restaurants, which generally incorporate the term “köfteci” in their name, are conveniently located in every city center, shopping complex and highway throughout the country. It’s just up to fellow foreigners to be able to decipher this life-saving hack for plant-based dining in Turkey.

Well, the cat is now out of the bag! If you want to gorge on wonderfully satiating and extremely healthy meals, head to the salad bars at these establishments or, if you are lucky, at some venues that dish up home cooking. But, believe me – speaking as a strict vegetarian, if you want the best selection, your top destination should be a köfte chain restaurant; due to the strong competition in the sector, they must maintain consistently high quality and selection when it comes to their salad bars.

Salad bars in Turkey can be either self-service or dished onto the plate for you, but in either case, there will definitely be a large refrigerated display that is in essence the salad bar. There will always be a selection of freshly washed and chopped greens, ranging from romaine lettuce to arugula, watercress and parsley. The usual accomplices of grated carrots, chopped cucumbers and tomatoes, as well as fresh and roasted peppers, will also be on hand. This is where the similarities between a Turkish salad bar and a Western one end.

In Turkey, there is rarely any form of salad dressing mix, and cream dressings are nearly nonexistent. But what you will find to dress your greens will be bottles of high-quality olive oil, lemon juice, vinegar and pomegranate molasses. Don’t fret if this sounds simple as, once you have formed the basis of the salad, you can then venture into the wonderful array of gourmet ingredients and carefully constructed and premixed vegetable, pulse and grain salads on offer.

Every Turkish salad bar will inevitably have a selection of beans on offer. The “piyaz” will definitely make an appearance as will a salad of black eyed peas and chopped roasted red peppers and spring onions. The popular home cooking dish of “taze fasulye,” which are thinly sliced green beans stewed with tomatoes and onions might be on offer and there will also most likely be separate bowls of cooked chickpeas and kidney beans to add protein to your bowl.

The nitty gritty of Turkish salads

What truly makes a Turkish salad bar unique is the array of classic salads that will unfailingly adorn a salad bar. The fine-bulgur and tomato salad of “tabbouleh” or “kısır,” which are similar yet differ in very subtle ways, such as the latter’s inclusion of tomato and red pepper paste, makes its way onto every salad bar in Turkey, as do a number of Turkish variations on potato salad. However, potatoes are where it gets tricky. The typical Turkish potato salad is dressed in olive oil and an acidic agent, either lemon or vinegar, and incorporates parsley, onions red peppers, and possibly even tomatoes. The “American salad,” however, uses a mayonnaise-based sauce and consists of peas, boiled carrots and hard boiled eggs. Don’t even get me started on why it’s called “American salad” as for all intents and purposes it happens to be the exact same salad that everywhere else in the world refers to as “Russian salad.” Go figure!

There may be an olive oil-dressed pasta salad, with julienned salami, which, if so, would be the only dish on display to have meat. Turkish coleslaw, a medley of shredded carrots, purple cabbage and parsley with olive oil and lemon juice may be among the selection, or a more Western mayo-based coleslaw may also be up for grabs. Yogurt, if seen at all, may surface in the simple two-ingredient Turkish salad of watercress and yogurt.

A peck of pickled peppers...

No Turkish salad bar would be complete without two of the most key ingredients in Turkish cuisine: the pickle and the olive. The pickle will make its way in many forms, such as pickled shredded purple cabbage, cubed pickled beets, pickled cucumbers, peppers and even pickled green tomatoes.

From kalamatas to capers, one of the delights of visiting salad bars of this caliber is getting the opportunity to try a variety of olives, which usually come in all colors, shapes and sizes, and brined capers, as well as caper flowers, can be a real treat. Of honorable mention, the turnip, in purple and white varieties, will also pop up on a Turkish salad bar. Last, but certainly not least, is the array of edible wild greens that are either blanched, pickled or served up fresh with a drizzle of oil and a squeeze of lemon and can include “kaya koruğu” (rock samphire), “kuzu kulağı” (wood sorrel), hindibağ otu (chickory) and “reyhan” (purple basil).

The best salad bar in the world!

Seriously in a league of its own and arguably the most unique and delicious salad bar in the world is that of the famous Çiya set of restaurants housed on the same street in the bustling heart of Kadıköy. An absolute must for expats and foreign visitors, the vast array of Anatolian and Ottoman dishes that line the salad bar and hot food case are truly mind-boggling. The man behind this traditional yet innovative series of restaurants is Turkish chef Musa Dağdeviren, whose success and skill led to his being featured on the Netflix docuseries "Chef’s Table." Operating in the same location for over three decades, there may be a line and ordering may seem complicated, but trust me – it’s worth it!

The salad bar at Çiya is truly out of this world, from a salad literally composed of basil and dressing to intricate dips such as “Muhammara,” “Hummus” and smoked eggplant, from “Fellah köfte” to “Arap Köfte,” spiced rice-stuffed peppers, tomatoes and grape vine leaves to Turkey’s answer to quinoa and a heritage grain and yogurt salad. A variety of unfamiliar wild herbs are dressed with pomegranate seeds and molasses, while another salad is literally just composed of all sorts of different olives and sun-dried tomatoes. To top it all off, Çiya serves Ottoman sherbets such as sweetened tamarind and basil juice to wash it all down.