Thanksgiving in Turkey, a good-hearted attempt by an amateur 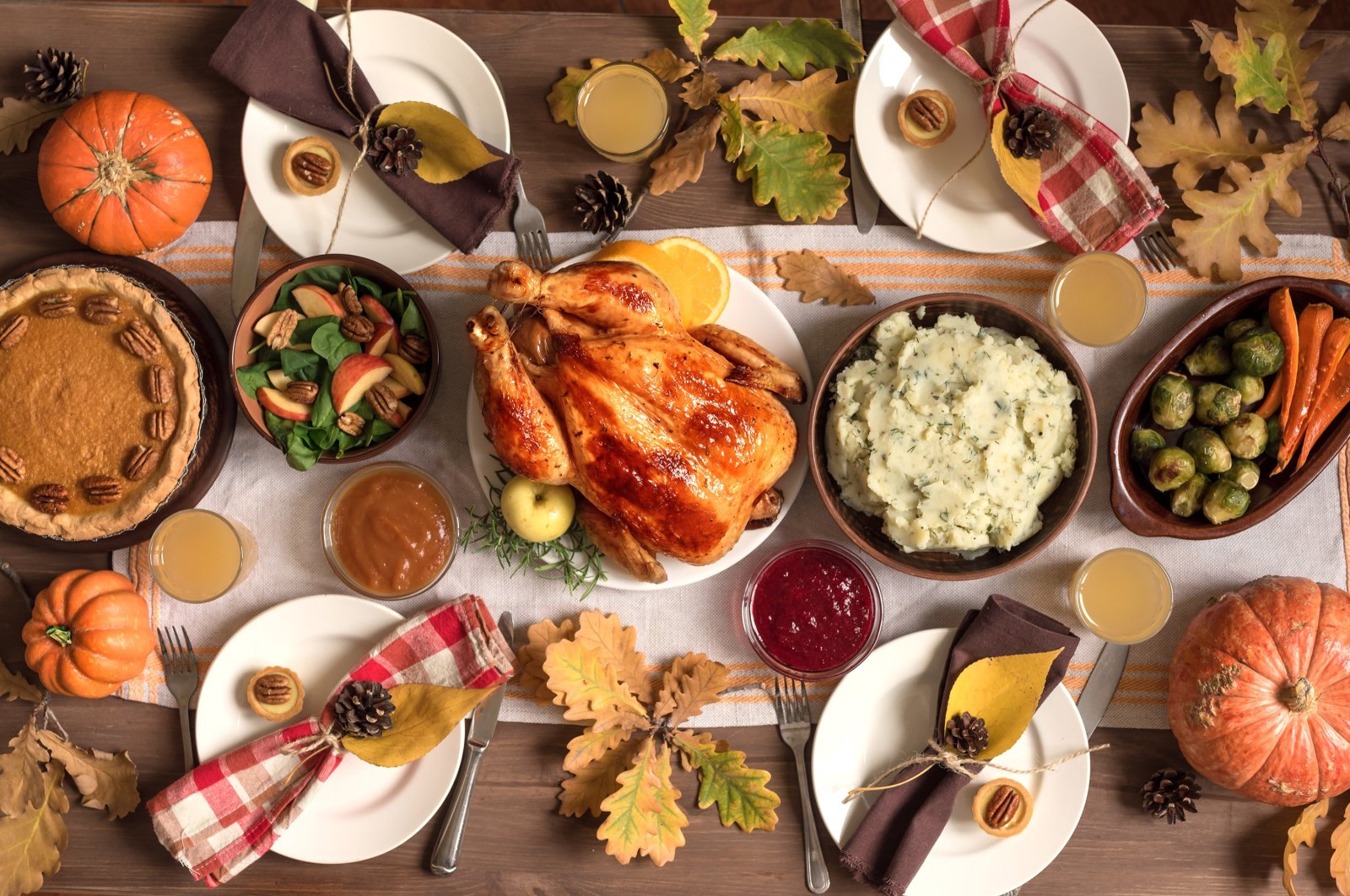 Go with some roasted turkey or chicken, two sides and a dessert for an intimate celebration of Thanksgiving. (Shutterstock Photo)
by Ayla Coşkun
Nov 22, 2020 12:05 pm

Even if you don't celebrate Thanksgiving, this American holiday is a wonderful reminder to count everything we are grateful for. And what better way to empathize than to indulge in some yummy traditional foods and share experiences?

For someone whose main exposure to Thanksgiving comes mostly from stereotypical American movies and series that center around the holiday, this may be well off. But after a little consulting with dear American friends, I'll attempt to get as close as possible to a traditional Thanksgiving dinner in Turkey, where it is ironically difficult to get a whole turkey.

Let’s address the elephant (or should I say turkey) in the room: finding a whole chicken to stuff is quite easy, especially when almost every convenience store has one on offer and at relatively fair prices. The issue with turkey is that it is scarcer, and it only appears right before New Year's. During other seasons, it is mostly sold in parts. Larger supermarkets such as Carrefour and higher-end shops will have whole turkeys available close to Thanksgiving time, but the price tag will reflect its rareness. For my recipe here, I am opting for a chicken because for just two people in our household, thanks to the coronavirus, it would be wasteful to go with a giant turkey.

Before the chicken goes into the oven, start by preparing the stuffing. Melt the butter and saute the chopped onions and celery until they have softened. Cut the bread slices into cubes and toss in the sauteed veggies and chopped mushrooms. Then pour half of the chicken broth over the bread, toss it for a bit to make sure they are mostly covered and moist enough. If not quite there yet, add more broth. But do not let the mixture get soggy. Season the deal with salt, pepper, thyme and other spices to your taste. Bake it for about 30 minutes at 170 degrees Celsius (330 degrees Fahrenheit) in a baking tin covered with aluminum foil. Remove the foil and bake for another 10 minutes.

Once the stuffing has cooled off, stuff the chicken with it.

Oil the chicken up and season it with salt and pepper. Bake it for one hour and 15 minutes at 80 degrees Celsius and remove it from the oven to baste it. Cover the baking tin in aluminum foil and let it rest for about 30 minutes before serving.

Important note: No Thanksgiving is complete without gravy! Pour the juices from your cooked chicken into a small pot. Mix some flour in some water in a separate bowl. Mix that into the fatty juice and heat it up. As it starts to come to a boil it will get thicker. That will go perfectly with...

Now that’s something I know my way around. Germans know their potatoes! To get perfectly cooked potatoes every time you need to know what kind of potatoes you have on hand. Some are very starchy and will want more milk or moisture to get to the right consistency and some will just need the bare minimum. The amounts given here are the middle ground, but just be aware of the consistency and keep in mind that it will evaporate a bit when it stays hot and you don't put a lid on it.

Peel the potatoes and cook them until they have softened. Drain the water and let the potatoes steam off the remaining water for a bit. When the potatoes have cooled off somewhat, mash them to your preference. Personally, I like to keep some of the chunks in there, but you might want it to be completely smooth. Now add the butter and a bit of the milk and turn on the heat on a low setting. Keep stirring until the potatoes reach a puree consistency. Depending on how thick you want your potatoes, keep adding more milk. If they get too watery, just keep stirring on low heat to evaporate the liquid. Once happy with the result, turn off the heat and add salt and nutmeg to your taste.

The main ingredient may constitute a problem here in Turkey. Although green bean types are aplenty here, the kind used in this recipe is not easily found locally – not everywhere at least. “Börülce” is the closest to the real deal, as one of our American editors Gabriela Akpaça told me while discussing this. But there is a wide range of “taze fasulye” (literally “fresh beans” in Turkish) that can measure up to your taste buds.

Wash the beans (whichever kind you get your hands on) and cook them briefly in boiling water until they are al dente. Let them drip dry.

Slice the onions relatively thick, coat them with the additional flour, whisked egg and then breadcrumbs, and bake them until they turn a golden color.

Melt the butter, add the flour and stir until the flour changes color. Add the milk and heavy cream to that and stir until it bubbles. Turn the heat off and add the chopped garlic, parmesan, salt and pepper.

Put the green beans and raw mushrooms (if you want to add them at all) in a deep enough dish and pour the sauce over them. Cover it with aluminum foil and bake for 20-30 minutes at 170 degrees Celsius. Remove the foil and bake another 10 minutes until the dish starts to get some color. As a final touch add the previously prepared onions on top. Let them turn a darker shade as well, which may take two to three minutes, and remove the dish from the oven.

No problems with getting our hands on the ingredients for this dessert here! Turkish people love their pumpkin and have a variety to show for it. The only caveat is that Turkey does not have the canned pumpkin that many U.S. recipes call for. But as pumpkins cook very quickly, the puree can be made really fast. I am aware that pies overall are pretty popular as a Thanksgiving dessert but as our American editor Jerrod Weston put it: “Dessert is almost always pumpkin pie with whipped cream! Some people do pecan or apple pie but those are silly folks. Pumpkin pie is always best.”

Start the crust by mixing flour, salt and margarine together and gradually add water until the dough holds its shape. Less or even more water might be required here, go slow. Roll the dough out on a floured surface until it is slightly larger than the baking tin you intend to use. Get the dough onto your rolling pin and gently place it into the baking tin. Gently press the dough if readjusting is needed.

Cut the pumpkin into small cubes and cook them in the heavy cream until soft, which takes about 10 minutes. Let it cool off and run it through a blender. Add eggs, sugar and spices to your taste and mix it until it is all incorporated. Pour the pumpkin filling into the pie crust and bake at 200 degrees Celsius for about 40 minutes.