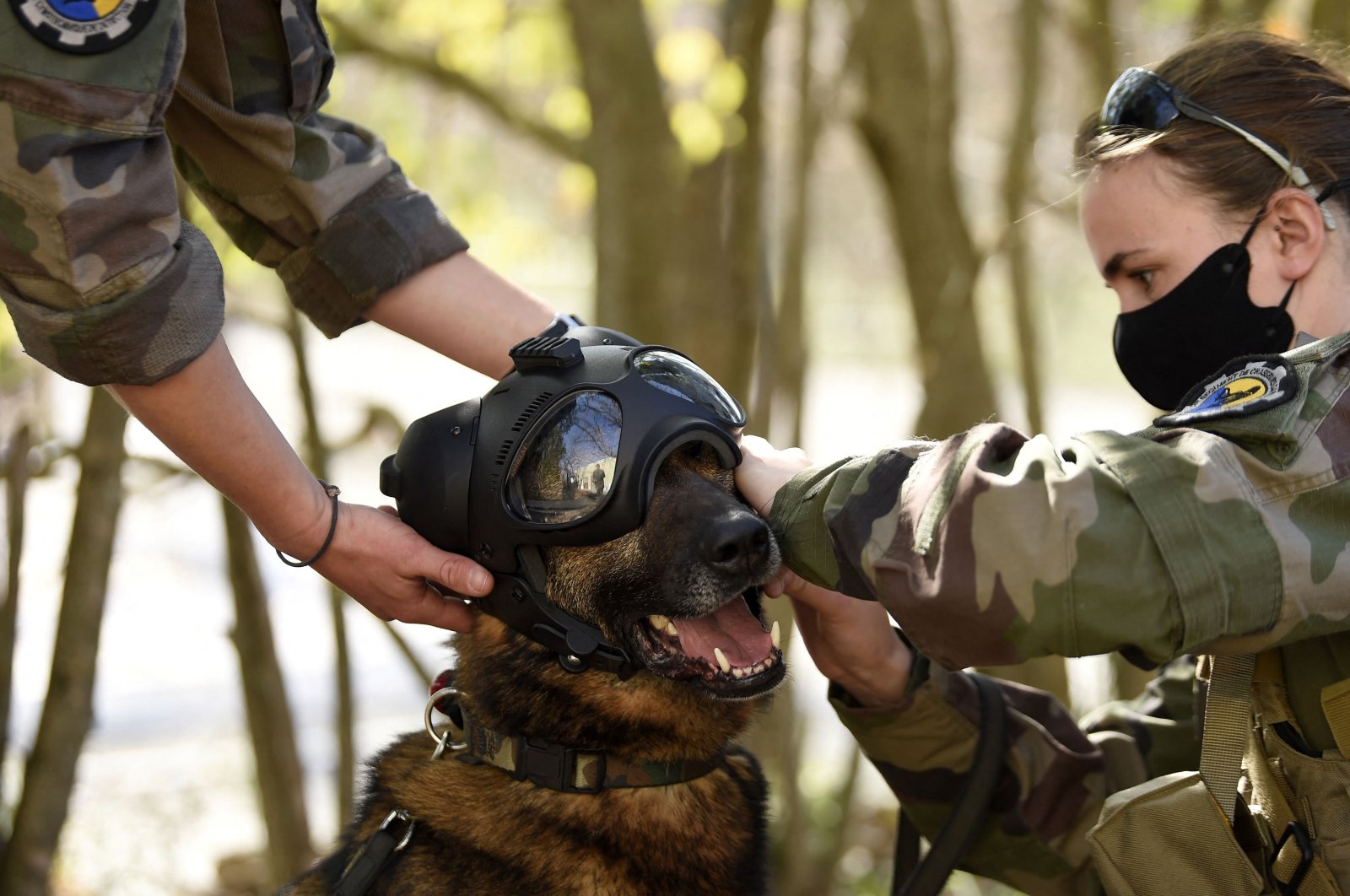 A French soldier adjusts a special helmet for her dog, which can receive instructions remotely and carry a camera, during a day of training to show their skills at a military camp in Draguignan, southeastern France, April 1, 2021. (AFP Photo)
by French Press Agency - AFP Apr 23, 2021 2:44 pm
RECOMMENDED

Dogs are known as “man's best friend,” but sometimes they are more than friends, they are “man's best guardian” as was Leuk, a French special forces dog who served with distinction all his life, and saved lives in a deadly anti-terrorist operation in Mali. It was only natural that he received the PDSA Dickin Medal – a British animal charity's top award for gallantry.

The 5-year-old dog, nicknamed "Leuk la Chance," or "Lucky Leuk," died in a subsequent operation in May 2019, when he was killed by an armed insurgent.

He was repatriated with his body covered by the French tricolor flag and was received with a guard of honor, like any human casualty of war.

He received the posthumous PDSA Dickin Medal for his bravery during an operation in April 2019, when two armed insurgents were positioned in thick vegetation near troops.

"Leuk ran through flames as the enemy continued to shoot at him and his team," the PDSA (People's Dispensary for Sick Animals), a veterinary charity, said. "He attacked the enemy relentlessly, allowing the unit to successfully neutralize them."

Later in the mission, he created a diversion by attacking an insurgent allowing the commandos to neutralize four more. Then while searching for explosives, he suddenly intercepted another armed insurgent.

"Not only did he go in but he engaged the enemy in combat for over five minutes," his handler, named only as Forest, said in video footage with his face concealed. "Thanks to that, I can talk to you today."

The PDSA Dickin Medal has been presented since World War II to animals that showed exceptional courage and devotion while serving in war and is the highest award of its kind.

It was first awarded in 1943 by the PDSA's founder Maria Dickin. Recipients have included dogs, pigeons, horses and even a cat.

Mali has been struggling to contain an insurgency since 2012. France, the former colonial power, intervened in 2013 and now has some 5,000 soldiers deployed across the semi-arid Sahel region.

Born in 2013, Leuk, a Belgian Malinois dog, was deployed with the K-9 division of French Special Forces' Kieffer commando unit after two years of training. His duties included detecting explosives and neutralizing attackers without killing them.

Leuk died on May 2, 2019, during a mission to neutralize a hidden extremist, who was armed and killed the dog. The French unit plans to unveil a memorial on the second anniversary of his death in memory of all dogs killed in combat.

"Leuk was a very impressive dog ... His skills were just exceptional and we suffer his loss a lot," the troops' commanding officer, named only as Nicolas, said in a PDSA video.

Leuk is the first French military working dog to receive the medal, which is inscribed "For Gallantry" and "We Also Serve."

A French police dog killed in a security services raid after the 2015 Paris attacks previously won the award.

German Shepherd Diesel's death led to the hashtag #JeSuisChien (I Am A Dog) trend on Twitter.