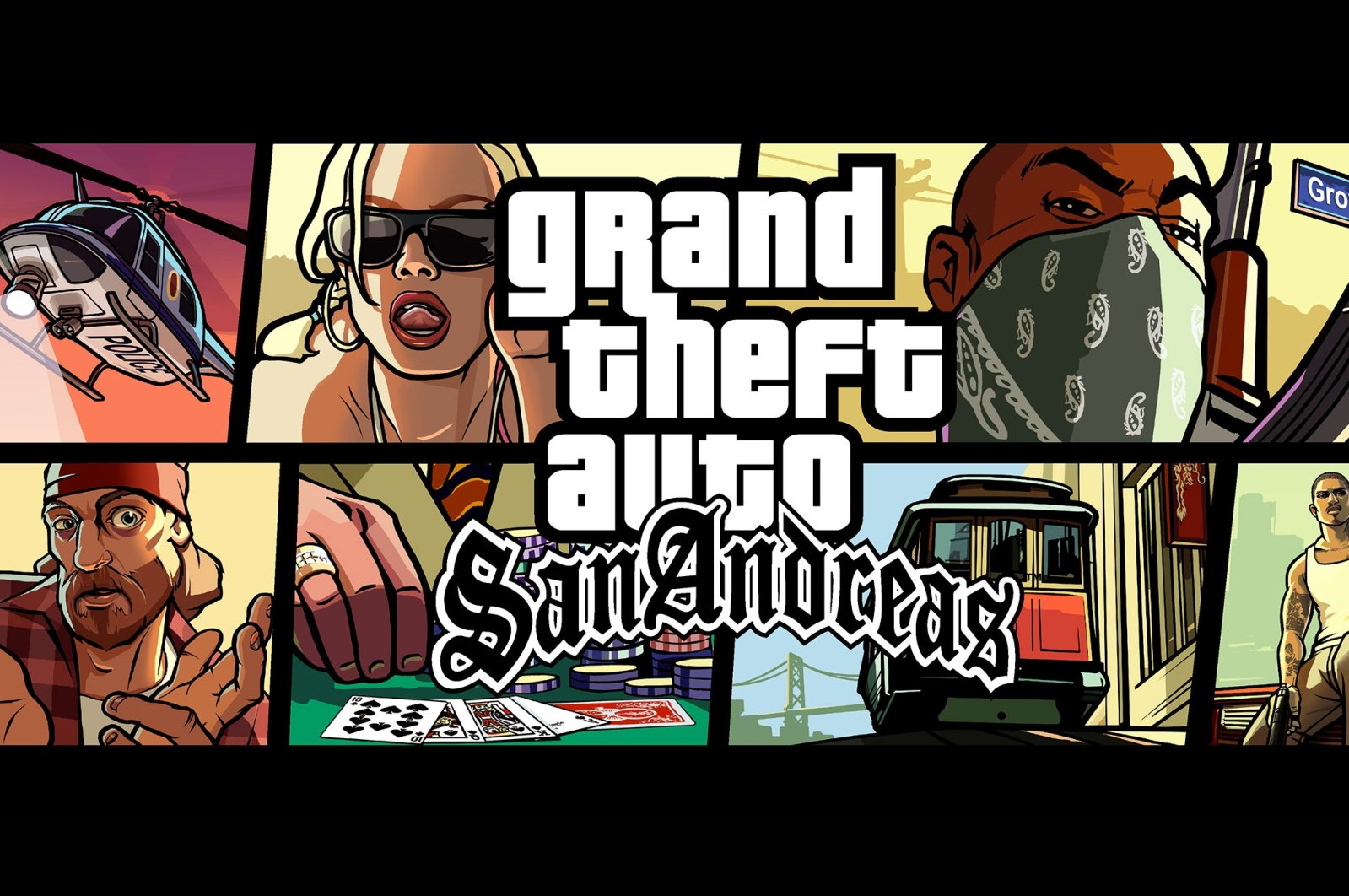 The official poster of the game GTA: San Andreas. (Courtesy of Rockstar Games)
by Emre Başaran Dec 21, 2020 11:50 am
Edited By Sinan Öztürk

I was 14 when I first played this game. I am now 30, and I am still enjoying it. It was one of the first games I downloaded on my new Xbox Series S, and it will also find its way into my PlayStation 5 when I get it. I will die playing this game

Disclaimer: Please consider this article a standing ovation to Rockstar’s masterpiece. The bestselling title of the bestselling console of all time. GTA: San Andreas lives on nearly two decades later and plays even better on modern devices.

Grand Theft Auto: San Andreas was released at a time when I was on the verge of learning English at school. My fluency was improving and I was planning to choose to study languages. This game is the reason why I unknowingly switch to African-American vernacular in my conversations nearly two decades later; it is also the catalyst that strengthened my love for hip hop culture.

Rockstar’s legendary GTA series has been a literal “game-changer” in the world of gaming. The series spearheaded open-world action games that we are showered with these days. Nevertheless, not many of them are as good as the GTA series, bar the newly released Cyberpunk 2077, and even that doesn't offer as many leisurely real-life activities as the GTA series does.

GTA is like life itself. You hop in a car, watch a movie at the cinema, grab a bite afterward, rest at your multimillion-dollar Los Angeles residence... what a life, right?

Many of these in-game activities were introduced by the one and only GTA: San Andreas, which gave us the opportunity to indulge in real-life things, blurring the lines between game and reality.

Revisiting the legend, again and again

The best way to test out a game's transcendence is to play it again and again, on every platform you can think of. I cannot count how many times I did this; whenever I get a new gadget that is capable of running GTA: San Andreas, I install the game on it. Be it an iPhone, a new laptop, a MacBook, a new console, you name it.

Its very presence makes me feel peaceful as if Ganton – the GTA universe equivalent of the Los Angeles neighborhood Compton, which is the birthplace of hip hop culture – is my comfort zone.

The game has created its own culture and has become the digital embodiment of everything life offers: happiness, sorrow, conflict, betrayal, friendship, being a family, caring for loved ones. There are so many expressions in the game that can change your perception of the world and of life:

“Just looking out for you, homie, it’s all show and respect, you know.”

“Everybody blasts on fools first, then asks questions second.”

“Like it says in the book ... We are both blessed and cursed.”

My positive bias toward this game clouds my judgment and makes me overlook the fact that it has not so gracefully aged, with its graphics and gameplay feeling a little bit primitive for the uninitiated and unwistful. Likewise, if you do not have a strong sense of nostalgia, a gaming purist or this is your first experience of a game of the past, you'll likely be too spoilt to enjoy it. I, for one, have grown so accustomed to its gameplay mechanics that I never feel anything that bothers me. Yet, I would enjoy a modern remake of this game.

You can still have an absolute blast playing this game thanks to the advancements in technology and the gaming realm. Though the PC side was a little problematic when I last checked it as it had a weird glitch that caused the cars to shake while driving, due to optimization problems caused by the new hardware. But the console side still shines; all last-gen consoles and new ones handle the game with ease and grace. And the game also plays flawlessly on iPhones and iPads, and it also works well on modern Android devices too.

Considering the gamepad support every single mobile device has these days, there is no real reason not to play it, though. Connect an Xbox or a PlayStation controller to your gadget, and start hanging around in the beautiful cities of Los Santos, San Fierro and Las Venturas, the GTA universe equivalents of Los Angeles, San Francisco and Las Vegas, respectively. In addition to these three big cities, you have the “Badlands,” the rural areas, the mighty Mount Chiliad, and countless Easter eggs scattered around the fictional state of San Andreas, which is a reference to the namesake fault line in California.

GTA: SA is also famous for its captivating plot, which makes the player have a rush of emotions through its many hours of gameplay. It has numerous side missions, and there is much to do around San Andreas. You can trade, be a cop, help the needy by being an ambulance driver, get into races, perfect your helicopter or plane skills at training centers, get ripped at the gym as “If you don't respect your body, ain't nobody gonna respect you!” – another life lesson given by the Sweet, the older brother of the game's protagonist Carl Johnson, that I, myself, need to hail too.

From the betrayal of the notorious Big Smoke and Ryder the corrupt cop Tenpenny; from ethnic tensions to the life in ghettos; from the evils of big government to the struggle of hippies; from hip-hop culture to the casinos, GTA: San Andreas, in many ways, is exactly the life itself.

I will continue playing this game as much as I can, and I’ll make sure my kids appreciate its beauty too. Ignore comments such as "Are you still playing that old game?” Yes, it is a 16-year-old game, but it's not outdated. The 16-year-old inside me never gets enough of it anyway.