14 foods to eat to optimize your immune system this winter 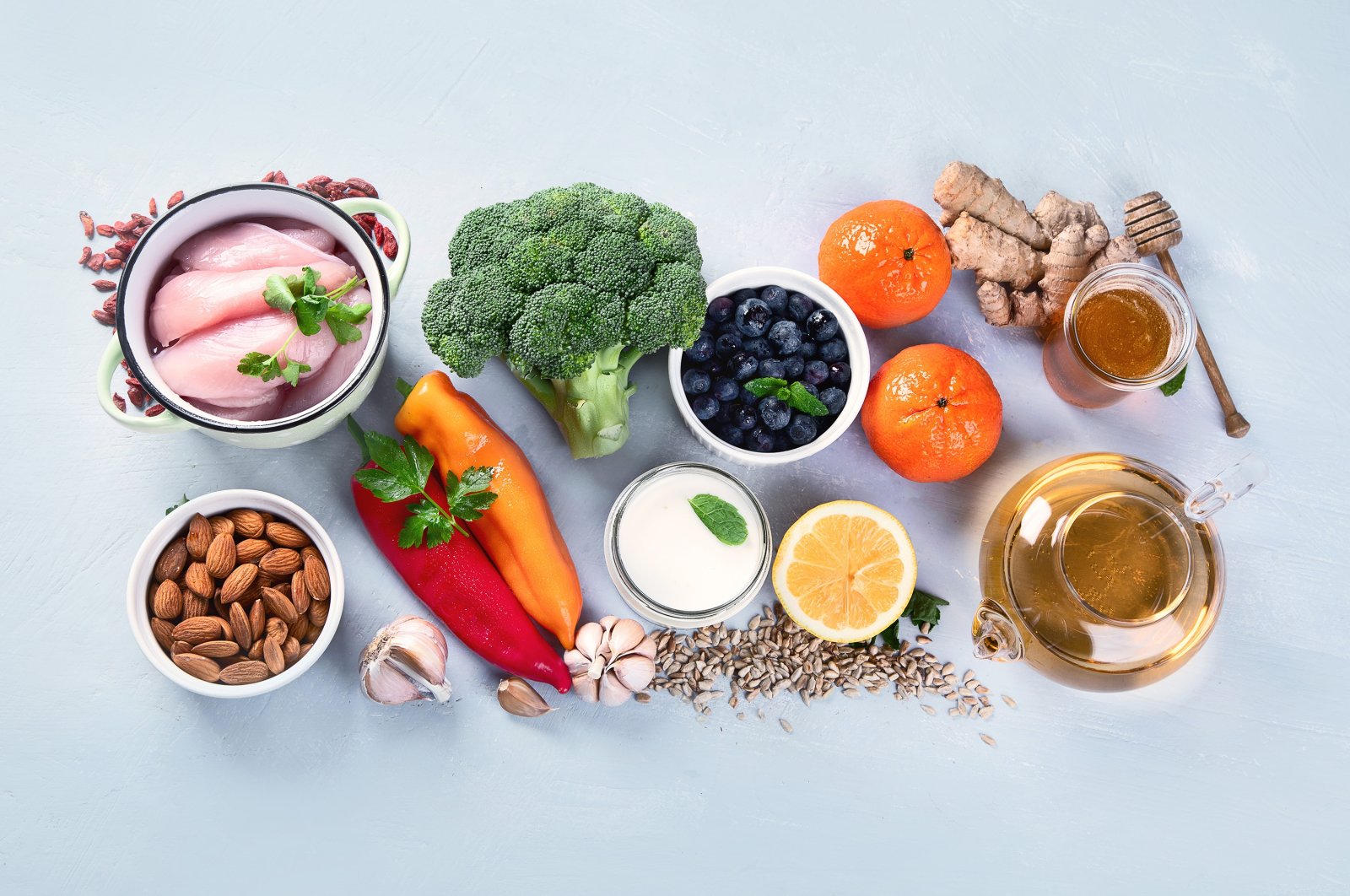 Our immune system is the guardian of our health, and this year it will be working overtime to combat colds, flu and the coronavirus. Here are 14 foods that could help bolster your immunity from the inside out

This winter our immune systems will have to face a compounded threat: colds, the dreaded flu and COVID-19. Though doctors are hopeful that mandatory mask-wearing may help reduce incidences of colds, the flu and bronchitis by reducing the spread of droplets, they also fear that having spent months in lockdown and not getting exposed to any germs may be taking a toll on our immune systems.

The three most effective and scientifically proven ways to protect ourselves from the coronavirus and other respiratory illnesses are practicing meticulous personal hygiene, adhering to social distancing and wearing masks whenever we leave our houses. But even with those bases covered, we still need a strong immune system to fight off infections coming our way.

Dietary specialist Esra Işıkdemir says the easiest and simplest way to strengthen our immune systems is by increasing the amounts of vegetables and fruits we consume.

"Vitamin E is also a very powerful antioxidant that helps your body fight infections. Almonds, peanuts, sunflower seeds and hazelnuts are among the best examples of foods rich in vitamin E. We know that fruits such as oranges, tangerines and grapefruits have a high vitamin C content. Spinach, bell peppers, Brussels sprouts and broccoli are also rich in vitamin C," she said.

Internal Diseases and Nephrology specialist and professor Tevfik Rıfkı Evrenkaya points out that every stage of the immune response depends on the presence of many micronutrients, namely zinc, selenium, iron, copper, folic acid and vitamins A, B6, C, D and E.

"They help strengthen the immune system and bodily functions by acting as antioxidants to maintain healthy cells, support the growth and activity of immune cells and produce antibodies. Studies show that a deficiency in these vitamins and minerals will negatively affect immune responses,” says Evrenkaya.

Therefore, consuming a variety of and sufficient amounts of these nutrients is crucial for the health and function of all our cells, including immune cells. However, there are some foods that can play a key role in boosting our immunity thanks to their rich vitamin and mineral content.

Vitamin C is a tried and true vitamin when it comes to immune functions. It works by aiding the production of white blood cells, which play an important role in fighting off infections. Evrenkaya says almost all citrus fruits such as lemon, tangerine, orange and grapefruit are great sources of vitamin C.

“It is very important that you consume these foods every day, as your body does not produce and store vitamin C”.

Whether used in salads, stuffed with rice as a "dolma," consumed roasted, pickled or raw, red peppers are a key element of many Turkish dinner tables. What makes it a superfood for our immune system is its vitamin content.

In fact, red peppers contain much more vitamin C than oranges – 100 grams of oranges have 53 milligrams while red peppers have almost twice that amount at 82 milligrams. Red bell peppers are also a rich source of beta carotene.

Kiwis are rich in many essential nutrients, including folate, potassium, vitamin K and vitamin C. Like red peppers, kiwis are also a vitamin C superstar, containing as much as 92 milligrams of vitamin C per 100 grams, surpassing its counterparts from the citrus family.

Rich in vitamins A, C and E, as well as fiber and many other antioxidants, broccoli is one of the healthiest vegetables you can put on your plate. However, to best preserve its nutritional value, it's important that you do not overcook it and eat it as raw as possible.

Spinach is a vegetable rich in vitamin C, antioxidants and beta carotene, which makes it a key food for the immune system. Similar to broccoli, try to cook spinach as little as possible to preserve its nutritional value.

Yogurt contains both bacterial and non-bacterial elements, the first group of which is mainly probiotics. Probiotics are live gut-friendly bacteria and yeast that have proven immunity-supporting effects. Yogurt also contains protein, riboflavin, folic acid and calcium, which also bolster immunity.

However, when it comes to yogurt, Evrenkaya advises consuming plain yogurt, instead of artificially flavored and sugar-laden types which can contribute to diabetes. To sweeten plain yogurt, opt for healthy fruits and honey, he says.

Yogurt is also a great source of vitamin D.

Işıkdemir says in addition to consuming foods rich in vitamin D, it is also important to get daily sun exposure of about 10 to 15 minutes, leaving bare the hands and feet to make the most of it.

"If your vitamin D count is really low, your doctor may advise you to take supplements," she adds.

Rich in vitamin E, almonds are regarded as a powerful antioxidant. It is recommended that adults consume 15 milligrams of vitamin E every day, which equals about half a cup of almonds to meet the recommended daily requirement.

Rich in substances such as phosphorus, magnesium, B6, selenium and E vitamins, sunflower seeds can also support the immune system. Evrenkaya says they usually recommend consuming 30 grams (about 2 tablespoons) of sunflower seeds every day.

Green and black tea are rich in flavonoids, which is a type of antioxidant. Green tea also contains catechins, phenolic compounds also found in berries and cocoa, which help improve immune function. Unfortunately, during the fermentation process that black tea goes through, many of these catechins get destroyed. Green tea, on the other hand, is steamed and not fermented, so the catechins are preserved.

A 2018 study found that catechins in green tea decreased rates of flu infection and increased immune activity. Theaflavins, which are produced as a result of the fermentation of black tea, are also said to support immunity.

Thanks to the manganese it contains, ginger can help reduce inflammation in the body, relieve nausea and reduce chronic pain. In addition to its anti-inflammatory and anti-cancer effects, it supports immunity thanks to its B6 content.

This bright yellow bitter spice, which is the main ingredient in curry, has been used as an anti-inflammatory for years in the treatment of both osteoarthritis and rheumatoid arthritis. High concentrations of curcumin, which gives turmeric its unique color, can also help muscle recovery after exercise. Turmeric is also promising as an immune booster and antiviral nutrient thanks to the curcumin it contains.

Garlic is praised by many for being naturally antibacterial and having great immune-boosting properties which come from allicin, the sulfur-rich compound it contains when consumed raw. Not only does this give garlic is characteristic flavor, but it also helps it exhibit antimicrobial activity.

A 2014 study found that those who took garlic supplements every day for 3 months had fewer colds than those who did not.

When we have a cold, the first thing that comes to most people's minds is "mom's chicken soup."

What makes soup made from chicken broth worthy of being called a cold cure is the vitamin B6 it contains, says Evrenkaya.

“Vitamin B6 plays an important role in many chemical reactions occurring inside the body. It is also vital for the formation of new and healthy red blood cells. Broth, made by boiling chicken bones, also contains vitamin D and cobalamin, which aid intestinal healing and immunity," he said.

Fish as well as some shellfish such as mussels and shrimp are rich in zinc, a mineral essential for the proper functioning of our immune cells. The daily recommended zinc intake for adult males is 11 milligrams and 8 milligrams for adult females.

"Zinc can be found in animal protein sources such as meat, fish and eggs as well as oilseeds such as pumpkin seeds and almonds," said Işıkdemir.