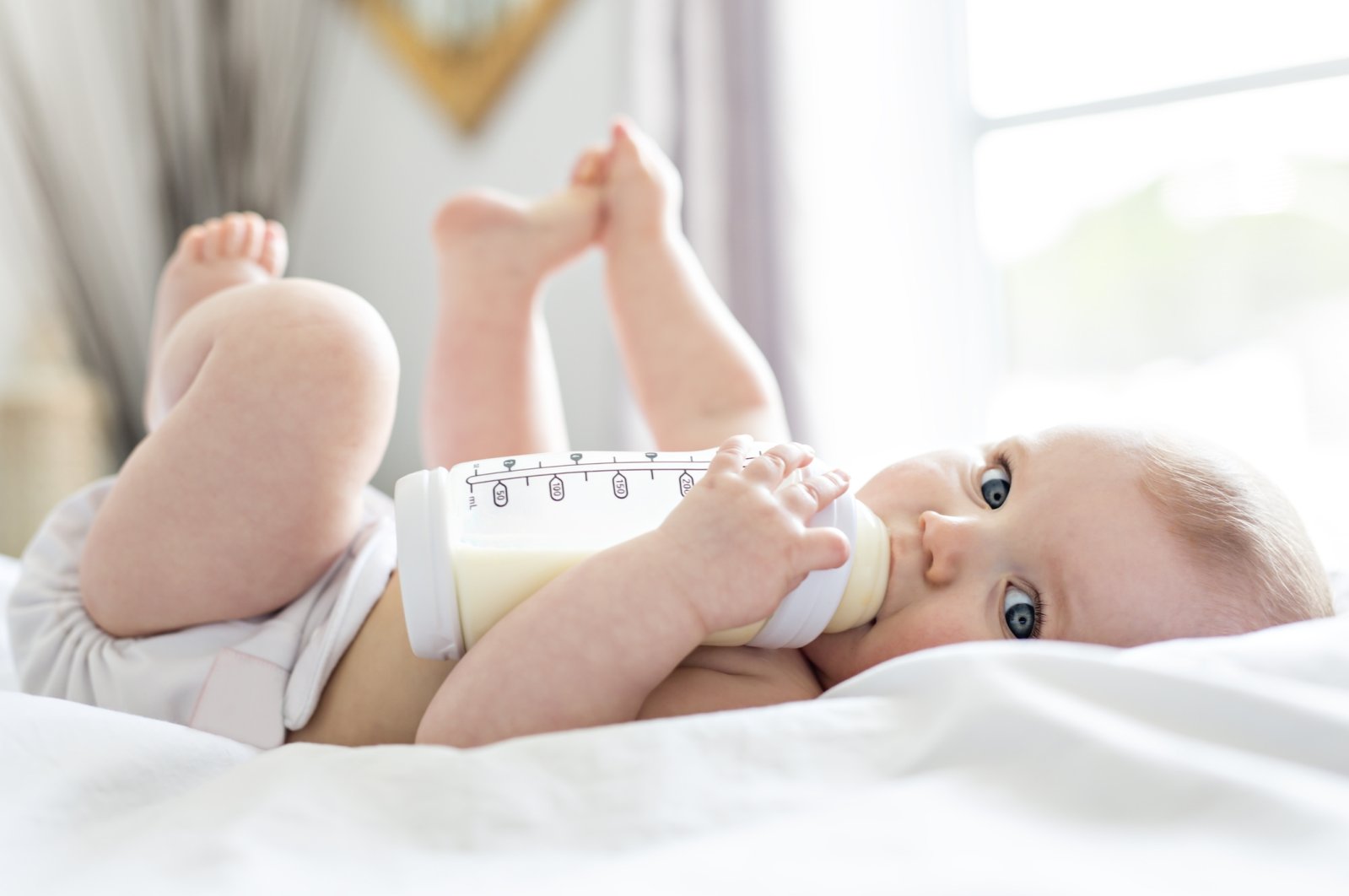 The study shows that plastic baby bottles, when heated or shaken, can release microplastics into liquid. (iStock Photo)
by DAILY SABAH WITH AGENCIES
Oct 21, 2020 10:55 am

Bottle-fed babies may ingest more than a million pieces of microplastics each day, new research has shown, highlighting the abundance of plastics in our food products.

There is growing evidence that humans consume huge numbers of the tiny particles, formed when larger pieces of plastic break down, but very little is known about the knock-on health consequences.

Researchers in Ireland looked at the rate of microplastic release in 10 types of baby bottles used to prepare infant formula or accessories made from polypropylene, the most commonly used plastic for food containers. They followed official guidelines from the World Health Organization on sterilization and formula preparation conditions.

Over a 21-day test period, the team found that the bottles released between 1.3 million and 16.2 million plastic microparticles per liter when exposed to high temperatures. The study showed microplastic pieces were released in seven bottles because of heat while preparing formula. It also observed that the warmer the liquid inside, the more microplastics released. They then used this data to model the potential global infant exposure to microplastics from bottle-feeding, based on national average rates of breastfeeding.

They estimated that the average bottle-fed baby could be ingesting 1.6 million plastic microparticles every day during the first 12 months of their lives.

The authors of the research, published in the Nature Food journal, said that sterilization and exposure to high water temperatures had the biggest effect on microplastic release, going from 0.6 million particles per liter on average at 25 degrees Celsius (77 degrees Fahrenheit) to 55 million per liter at 95 degrees Celsius.

"The number of detected microplastic particles appears very high," said Philipp Schwabl, a researcher at the Medical University of Vienna who wrote an editorial accompanying the study. "However, we do not know the impact of ingesting such microplastic levels on infants or generally on human health yet."

The authors told Agence France-Presse (AFP), however, that the aim of the research was "not to worry parents" about the potential health risks of bottle microplastics.

"We have communicated, as strongly as we can, that we do not know the potential health risks of infant ingestions of microplastics," said the team, from Trinity College Dublin.

"This is an area of research we are now actively pursuing."

The authors noted that it was in developed nations that babies were likely ingesting the most plastic – 2.3 million particles daily in North America and 2.6 million in Europe. This was attributed to relatively low breastfeeding rates in richer countries.

An annual global survey of 13,348 mums by Lansinoh, a company that provides breastfeeding and baby products, found in 2015 that 68% of mothers in Turkey breastfed their babies for at least six months, 32% continued until 12 months and 31% managed to continue for up to 24 months. Overall, Turkish mothers breastfed their babies the longest when compared to countries such as the U.K., France, Germany, Canada and Brazil.

According to a 2017 report by the Global Breastfeeding Collective, a new initiative launched by UNICEF and the WHO to increase breastfeeding rates across the globe, there is no country in the world that fully meets the recommended standards in breastfeeding.

Out of 194 countries, the report revealed that only 40% of babies under six months were solely breastfed (consuming no other foodstuffs) and that there were only 23 countries where babies were only breastfed over 60% of the time. Turkey, as well as many developed countries, were not among the listed countries. Kenya, Lesotho, Sri Lanka and Uganda were among the 23 countries on the Global Breastfeeding Scorecard.

The authors of the microplastics study said the levels could easily be lowered by taking a few additional steps, including rinsing bottles with cold sterilized water and preparing formula milk in a nonplastic container before filling the bottle.

Fay Couceiro, a senior research fellow in Biogeochemistry at the University of Portsmouth, said Monday's research highlighted the "urgency for studies on microplastic impacts on human health." She said that it was important not to be "alarmist" when it came to bottle feeding, which many parents prefer for a variety of reasons.

"The risks from not sterilizing bottles or using hot water are well understood and very real, and these known risks of disease must outweigh that of microplastic production until their health risks are understood," said Couceiro, who was not involved in the study.