Is the recycled air inside a plane safe? Airliners seek to assure travelers 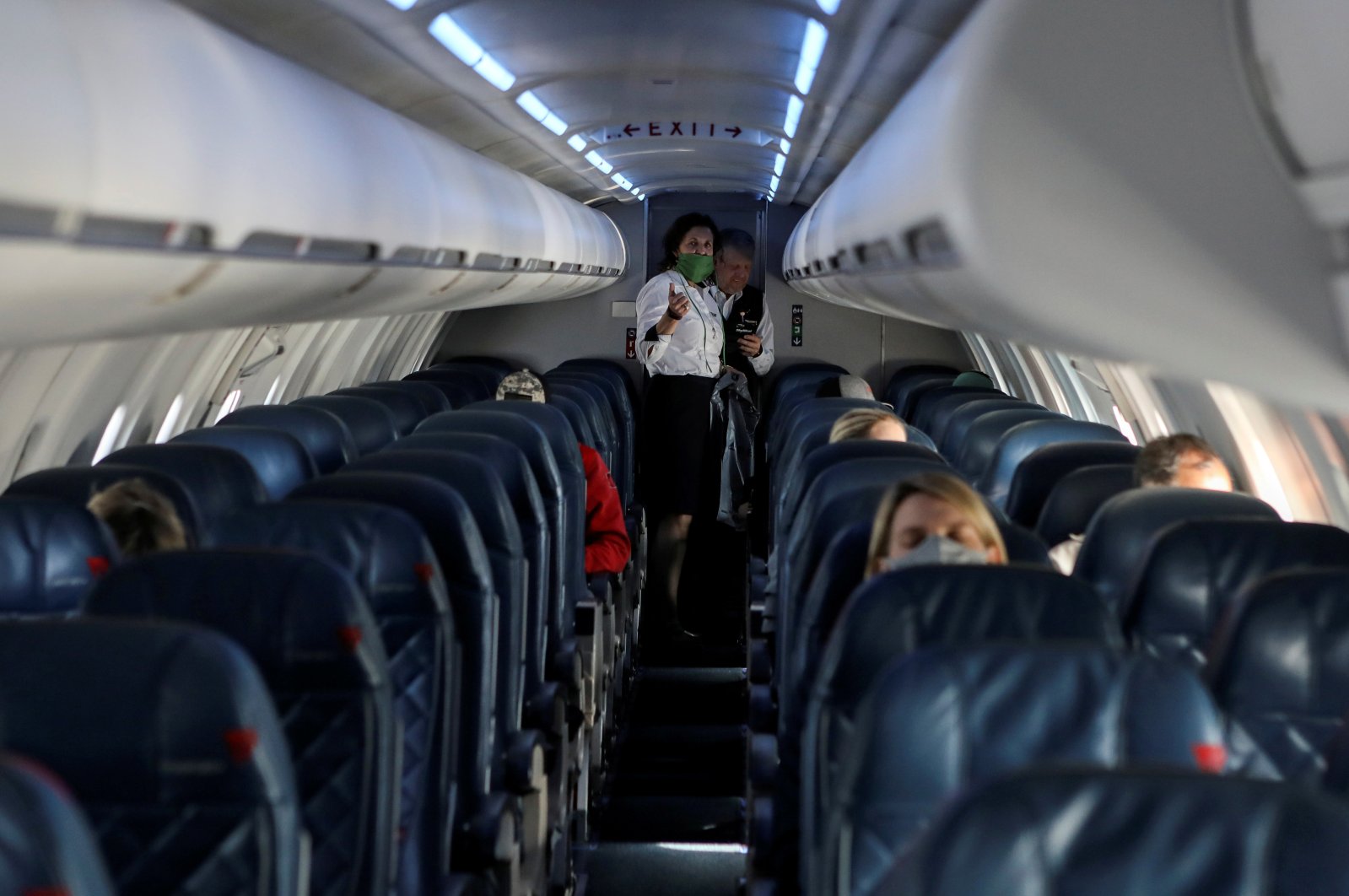 Flight attendants talk in a nearly empty cabin on a Delta Airlines flight operated by SkyWest Airlines as travel has cutback, amid concerns of the coronavirus during a flight departing from Salt Lake City, Utah, U.S., April 11, 2020. (REUTERS Photo)
by Daily Sabah with Reuters May 29, 2020 11:05 am
RECOMMENDED

Jet manufacturers and airlines have launched an urgent initiative to convince nervous travelers that the air they breathe on planes is safe, believing this is critical to rebuilding a travel industry floored by the coronavirus.

Boeing has appointed former engineering and development chief, Mike Delaney, to head wider efforts to build confidence, and Airbus leaders say the industry is moving from an initial crisis phase to securing public trust. That has triggered, among other things, a concerted effort to explain how cabin air filtration works in a bid to scotch the myth that the pressurized fuselage contains only static or recycled air.

Turkish Airlines CEO Bilal Ekşi also at the beginning of the week took to Twitter to quell fears and announce new safety measures. Stating that no cabin baggage, maskless passengers or queues inside the aircraft would be allowed, Ekşi assured that the filtration system used inside cabins was hospital-grade and provided effective sanitation.

Health officials are still quantifying various sources of transmission of COVID-19, the disease caused by the virus, but attention focuses on the risk of catching it from airborne droplets from coughing or sneezing passengers as well as from touching infected surfaces.

The air travel industry historically talks more about seat pitch than air quality. That's had to change as a result of the pandemic.

"It's about explaining what we do for the safety of passengers in the large sense: aircraft safety but also sanitary safety," Airbus engineering head Jean-Brice Dumont said.

In an office building, the air is exchanged about four times every hour. On a modern jet aircraft, that rises to 20 to 30 times.

"The air system on an airplane is as good as anything you will be exposed to," Delaney said. Air circulation is only one of several techniques for reducing the potential for the virus to spread on board including rigorous cleaning of the plane and screening passengers for signs of illness, he added.

In most cases compressed air is fed from the clean part of an engine – untainted by fuel which is added later – to air conditioning packs and from there to fans in the cabin ceiling. Both plane makers say cabin air pours downward not lengthways through the fuselage, reducing risks of infection. Half that air is then recycled through hospital-grade HEPA filters designed to remove some 99.97% of contaminants including viruses. The other half is flushed outside through valves.

Planemakers say cabin air is renewed every two to three minutes, though scientists caution that in reality, the air is always a blend. But the quicker the rate, the faster old air is diluted.

"The air turns over very, very quickly in the aircraft in terms of air-exchange rate. From that point of view the aircraft systems are very good," said Professor Byron Jones of Kansas State University, who has helped recommend air standards.

But airflow isn't the only part of a complex equation.

"The biggest challenge you have on an aircraft is the extremely high occupant density. You have got a lot of people crammed into a small space, and you have to get a lot of air in there to ventilate that space to maintain the air quality," Jones said.

The U.S. Centers for Disease Control and Prevention say the virus is thought to spread between people in close contact or less than 6 feet (1.83 meters) apart, around half the width of many cabins.

Air currents over such short distances are said to be hardest to predict. Passengers have some control through the individual air outlets nicknamed "gaspers" above each seat. On average, twisting them on makes things "a little bit better, but there is no guarantee," Jones said.

Although filtered, the pinpoint blasts of air could in a worst-case push nearby virus particles across a passenger's face. On the other hand, the air shower could have the positive effect of limiting sideways movements of air.

Faced with such questions, Boeing and Airbus have deployed engineers to examine seat-to-seat air flows – using the same advanced physics at play in wind-tunnel testing of a wing.

"We are actively running simulations to see whether we could recommend something for the individual air jets, " Dumont said.

The specter of in-flight contamination dates back at least to the SARS epidemic in 2003, though no link has been proved.

In March that year, a 72-year-old man infected with SARS, which is also a coronavirus, took a flight from Hong Kong to Beijing. At least 22 of the 119 passengers and two crew later developed the illness. It was the only significant case of in-flight transmission but prompted measures to prevent ill passengers boarding planes.

Such curb-to-curb measures must again be part of the strategy to keep the new virus off planes, Delaney said. Research on technology like ultraviolet-cleaning systems and anti-microbial materials may join the fight in the future.