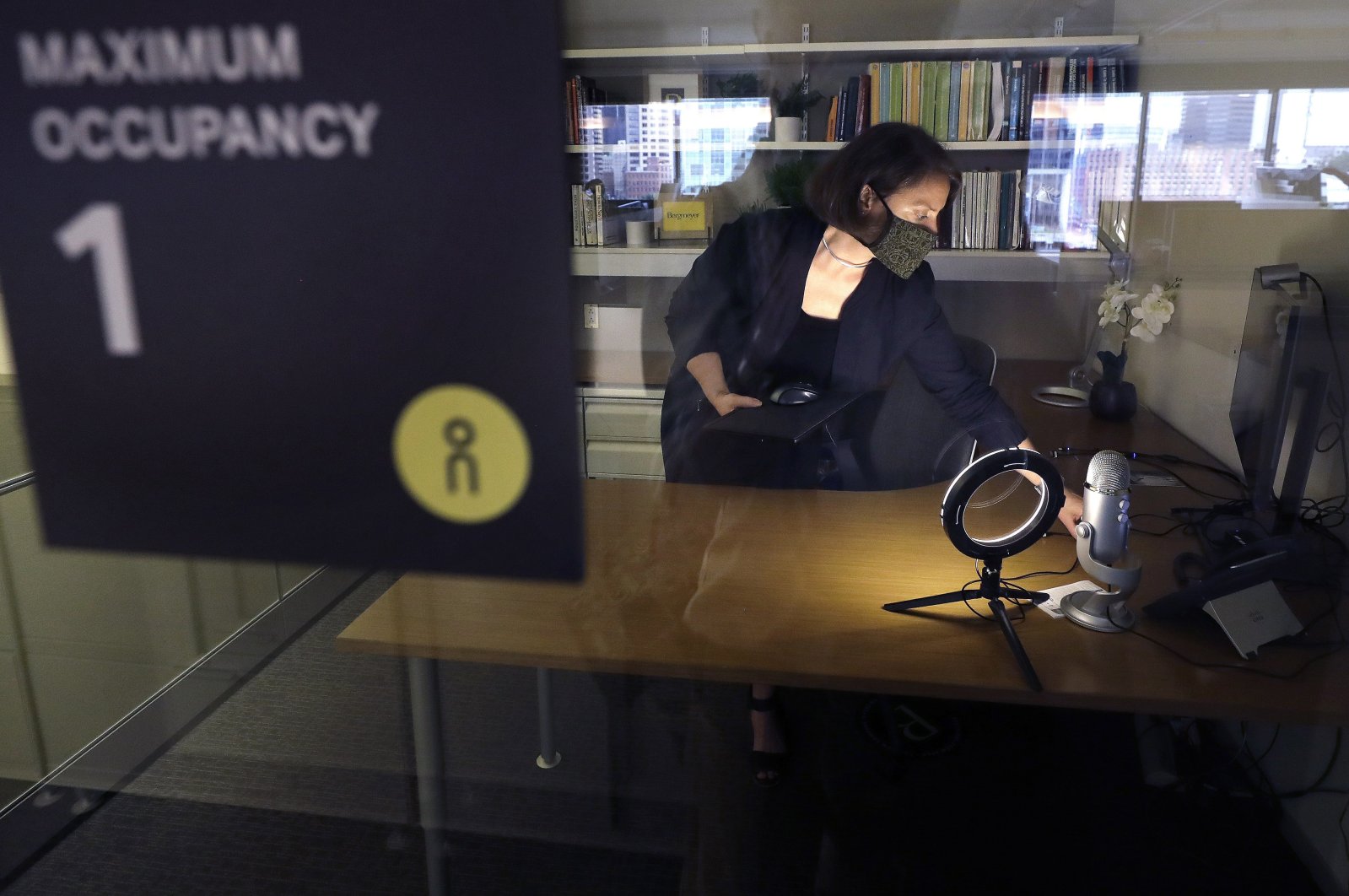 Bergmeyer, a design firm in Boston, has erected higher cubicles, told employees to wear masks when not at their desks and set up one-way aisles in the office that force people to walk the long way around to get to the kitchen or the bathroom.

“The one-way paths take me a little out of the way, but it was easy to get used to,” said Stephanie Jones, an interior designer with the company. “It actually gives me the opportunity to see more people and say a quick hello when I might have just walked directly to my desk before.”

Around the world, including Turkey, office workers sent home in March when most countries entered lockdown due to the coronavirus pandemic are returning to the world of cubicles and conference rooms and facing certain adjustments: masks, staggered shifts, spaced-apart desks, daily questions about their health and sanitizer everywhere.

For some at least, there are also advantages, including the opportunity to share chitchat with colleagues again or the ability to get more work done, free of distractions.

Employers in some cases are requiring workers to come back to the office, but most are still letting the employees decide what to do, at least for now. Some firms say the risks and precautions are worth it to boost productivity and move closer to "normal."

It is a meager trend so far. In Istanbul, office occupancy rates have been on the decline even more so since the pandemic broke out. Even in 2019, class A office spaces in the metropolis reported a 35.1% vacancy rate. Eight out of 10 employees in Turkey have also been introduced to a new "agile working" system that gives them the freedom and convenience of working remotely, according to research by property consultancy firm Colliers International. These statistics echo a general trend across the world. In New York, real estate firm CBRE said the offices it manages have a 7% occupancy rate in Manhattan and nearly 30% in the suburbs.

Many companies such as Bergmeyer have divided their returns into phases. The company began partially bringing people back in June. It is now in phase three, with 60% of the staff back in the office but split into two groups: Half come in on Mondays, Wednesdays and Fridays, the other half on Tuesdays and Thursdays.

Employees are asked to report any symptoms to a human resources director who can work with them on getting tested and quarantining themselves.

Jones elected to come back in the second wave, in late June.

“I found that I was surprisingly more productive than I thought I would be working from home, but ultimately decided to come back. I live alone, and I was missing the social interaction,” she said. She also missed the space in the office, her double computer monitors and other advantages.

“I’m an interior designer, and I’m used to picking finishes and materials with a whole resource library here I didn’t have access to,” she said. “Suddenly I had to be ordering everything to my home, and it was taking over.”

All in all, Jones said, "it’s great to come back in on a part-time basis on my own terms.”

Stephan Meier, a business professor at Columbia University, expressed skepticism about bringing workers back in the midst of the outbreak, which has been blamed for over 5 million confirmed infections and nearly 170,000 deaths in the U.S. Most firms have discovered that people can work effectively remotely, he said.

“The safety of your workers has to be the top priority,“ he said.

Though reopening has led to swift reclosing in many places with virus surges.

The Blue Sky advertising agency in Atlanta began reopening in May in stages, reconfiguring its open-plan workspace by spreading out tables, installing plastic partitions and establishing a limit of 10 people in the office at any one time out of a workforce of 25, and caps on how many could be in certain rooms. But a surge in cases in Georgia led to another shutdown at the end of June. Now employees come in only if they absolutely need to, said Dawn Evans, human resources manager.

Only a quarter of the 200 employees at the firm are allowed back. The desks have been reconfigured so no one sits next to anyone else, and common areas like the kitchen are closed. There are hand sanitizer stations and mask requirements. Only three or four people are allowed in the elevator at once, and building workers push the button for them.

However, for some employees, the riskiest part of their day is the commute, not the office environment itself.

“Frankly when I come to the office, I’m not worried once I’m here. Everything is safe,” Steve Spinner, an accountant in Chicago said. “The trains are a little more sketchy, not everyone following rules for masks and whatnot."