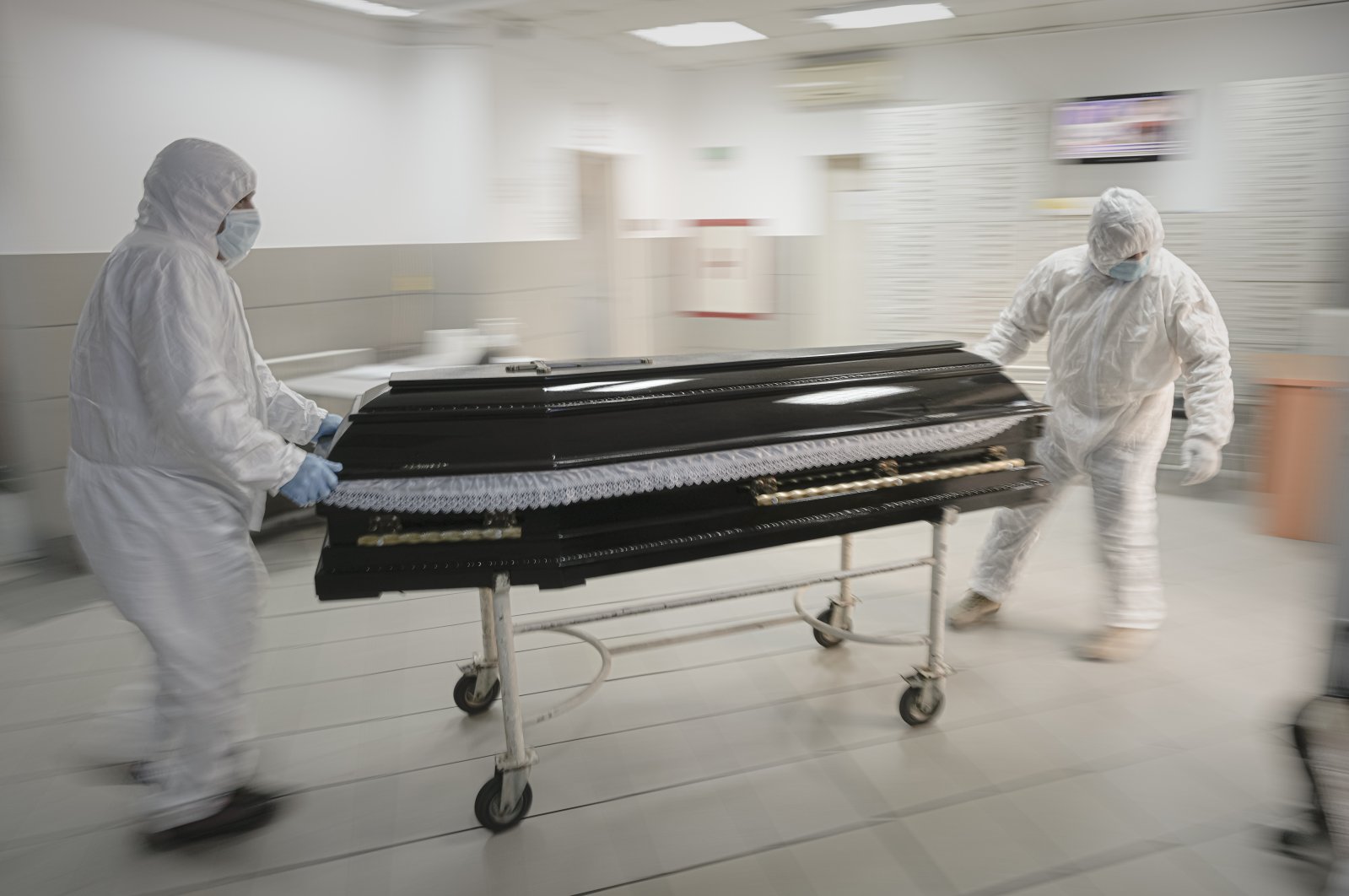 Funeral house employees drag a coffin on a trolley as they arrive at the University Emergency Hospital morgue to take a COVID-19 victim for burial, in Bucharest, Romania, Nov. 8, 2021. (AP Photo)
by German Press Agency - DPA Nov 20, 2021 9:29 pm
RECOMMENDED

The number of dead bodies left undiscovered at home in the United Kingdom for at least a week saw a significant rise in the first year of the pandemic as lockdowns went into full effect and the coronavirus outbreak was fresh, a new British study found.

All cases of home deaths where the body was considered "markedly decomposed” were situations where people lived alone, researchers said.

The number of deaths at home in the year after Britain went into its first lockdown rose by more than a third, with a 70% increase in the number of bodies being decomposed to that extent, researchers said.

The study authors indicated there would have been at least one to two weeks between death and a post-mortem examination for a body to reach those levels of decomposition in London, where the study took place.

There was a 70.5% increase in the number of bodies showing what they said was "marked decomposition” from March 2020, compared with the previous year, according to the study published in the Journal of Clinical Pathology.

Researchers looked at post-mortem examination reports and coronial documentation from one pathologist at a central London mortuary.

The number of deaths at home rose 38% compared with the previous 12 months.

The researchers said the rise in instances of decomposition was likely due to the rise in the number of home deaths caused by the pandemic, rather than social restrictions significantly changing the behavior or attitudes around those who live alone and die at home.

Study co-author and trainee pathologist Dr. Theodore Estrin-Serlui told The Daily Telegraph: "This excess in severe decomposition following death is generally a sign of the body not being found for a long time, in excess of at least a week.

"During the pandemic many people stayed away from the health service or found it more difficult to access treatment.”

In their paper, the researchers said their findings prompt questions about how people are dying at home, and they suggest "if these people had been in hospital we can consider that maybe they would not have died at all, if their condition/illness was readily treatable.”

The researchers acknowledged that their study was limited by its small sample size and narrow geographical coverage.

Most of the deaths took place in the London borough of Westminster or the borough of Kensington and Chelsea.

But the researchers said the mixed demographics – with some of the most wealthy living alongside some of the most deprived in these areas – as well varying ethnicities and ages mean the study is "fairly representative of the UK as a whole."

The authors added: "Our study’s information has important ramifications for the autopsy process, as bodies with significant decomposition changes are less likely to provide reliable, accurate causes of death due to the degradation of tissue and toxicology.

"This can lead to bereaved families having more uncertainty regarding the death of a loved one.”