Antalya Museum’s portrait sculpture determined to be Sappho of Lesbos 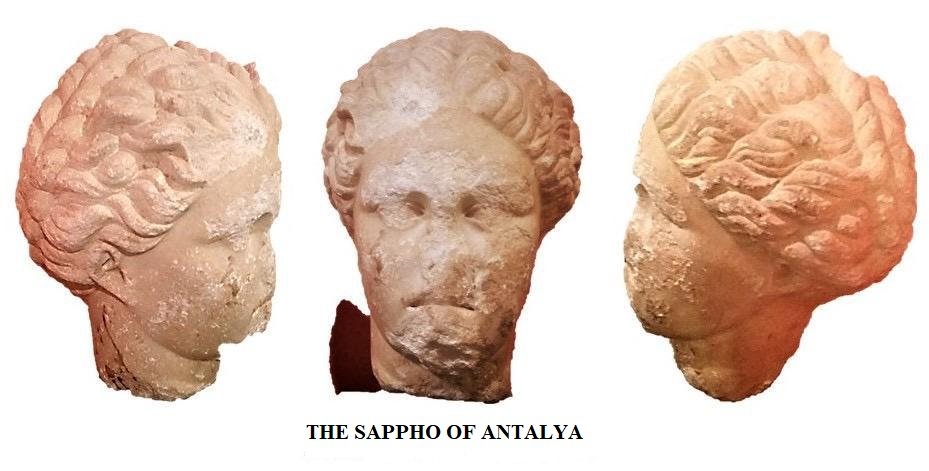 A portrait sculpture that has been at a museum in the Mediterranean resort city of Antalya since 1972 was recently found to belong to Greek poet Sappho, considered the first and greatest female poet of the ancient period.

Professor Havva İşkan Işık of Akdeniz University Faculty of Letters Department of Archeology announced the discovery on March 8. Işık, who is also the head of the excavation at the ancient city of Patara, noted that she lectures on sculpture and portraits at Antalya Museum, one of the most important sculpture museums in the world. The professor said the portrait, believed to have been found in the ancient city of Perge in Antalya, caught her eye at the museum.

“As a result of my research, I found that the portrait belonged to Sappho, known as the first and most important female poet of antiquity," Işık explained. "I also confirmed my work on the portrait with an academic review at universities abroad where I went as a guest. I will soon publish the scientific paper I have prepared about my work so that the whole world can learn that this work is in the Antalya Museum.”

Işık said the artwork was confiscated from smugglers by the Yenikapı Police Station in the historic city center of Antalya and delivered to the Antalya Museum in 1972. She said the portrait, carefully preserved in the museum, was thought to be of a man in initial records, continuing: “I considered it appropriate to announce my academic work on the portrait of Sappho, built in the fourth century B.C., on March 8, International Women's Day. Let the portrait of the most important female poet of the ancient period be my gift to Antalya on Women’s Day.”

'The Sappho of Antalya'

Saying that she named the portrait “The Sappho of Antalya,” Işık emphasized that the work will be cited with this name in literature from now on. Işık said another portrait of the great poet in Munich is called “The Sappho of Munich.”

“The portrait must now be placed in a very distinct and emphatic place in the Antalya Museum. There is no other example of it in Turkey. The Istanbul Museum has a Sappho head, but it is of another type. This is the only specimen of the fourth century B.C. in Turkey, and very few museums around the world have such work. The Antalya Museum, as a world-renowned sculpture museum, has augmented its importance once again with this work,” she said.

Işık also mentioned that there was no clear information on where the portrait was found. According to her, the museum says that the portrait was found in the ancient city of Perge, but this is not conclusive. "Yenikapı Police Station was located in the then-historic Kaleiçi. During those years, some basic excavations were carried out in Kaleiçi. So, it may have been found during excavations at Kaleiçi,” she said.

Işık said that Sappho, who was born in 630 B.C. and died around 570 B.C., was an early-period poet. “Unfortunately, we have 7-8% of her poems left currently, while the rest have been lost. She lived on Lesbos Island. At that time, Lesbos was an island influenced by Anatolian culture. These islands have never developed outside of Anatolian culture. Sappho is known for leading an extremely modern and noncompliant life. She often wrote love poems. She is a very important female poet,” she said.