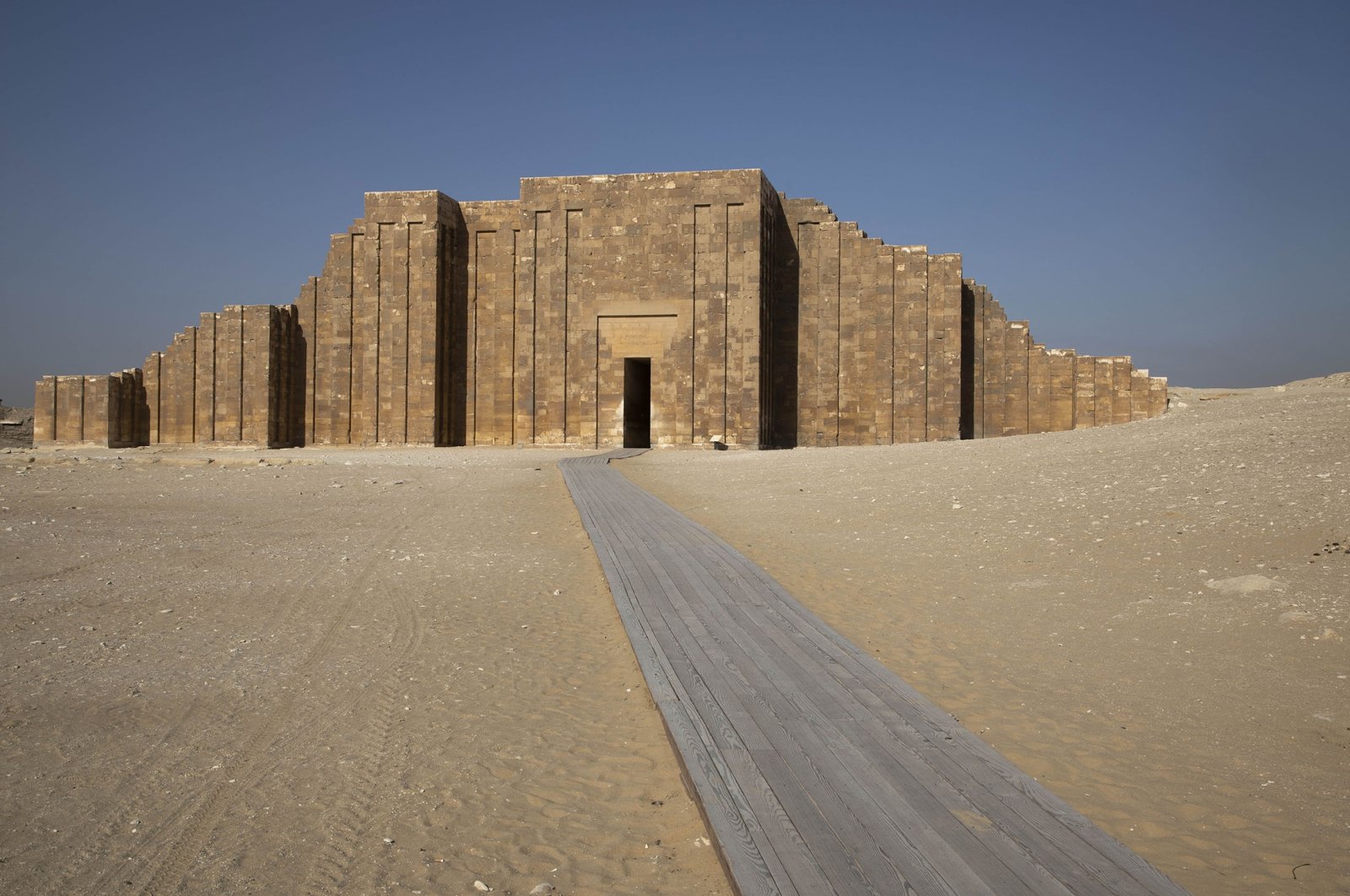 A path leads to the entrance of the southern cemetery of King Djoser, after its restoration, near the famed Step Pyramid, in Saqqara, south of Cairo, Egypt, Sept. 14, 2021. (AP Photo)
by Associated Press Sep 15, 2021 10:30 am
RECOMMENDED

Egypt on Tuesday unveiled an ancient tomb structure of the once mighty King Djoser, a pharaoh who lived more than 4,500 years ago, showcasing the cemetery complex that was the site of extensive restorations.

The structure – known as the Southern Tomb – is largely underground and includes a labyrinth of corridors decorated with hieroglyphic carvings and tiles. A central funeral shaft houses a massive granite-clad sarcophagus from Egypt's Third Dynasty.

However, the pharaoh was not actually buried there but in the famed Step Pyramid nearby. The two structures make up part of the Saqqara complex near Cairo – one of the country's richest archeological sites.

The Step Pyramid is the oldest known pyramid and one of the first examples of monumental architecture from the ancient world, according to UNESCO. It is believed to have been the inspiration for the Pyramids at Giza.

Egypt's Ministry of Antiquities and Tourism said the opening this week of the tomb structure marked the completion of restoration work that started in 2006 and included reinforcing of the underground corridors, refurbishing the carvings and the tiled walls and installing lighting. As of Tuesday, the tomb opened to the public.

In addition to the Southern Tomb, the Saqqara plateau hosts at least 11 pyramids, including the Step Pyramid, as well as hundreds of tombs of ancient officials and other sites that range from the 1st Dynasty (2920 B.C.-2770 B.C.) to the Coptic period (395 A.D.-642 A.D.).

The Saqqara site is part of the necropolis of Egypt's ancient capital of Memphis that includes the famed Giza Pyramids, as well as smaller pyramids at Abu Sir, Dahshur and Abu Ruwaysh. The ruins of Memphis were designated a UNESCO World Heritage site in the 1970s.

Egypt has publicized a string of recent archaeological finds over the past year in an effort to revive its key tourism sector, which was badly hit by the turmoil that followed the 2011 uprising. The sector was also dealt a further blow by the global coronavirus pandemic.