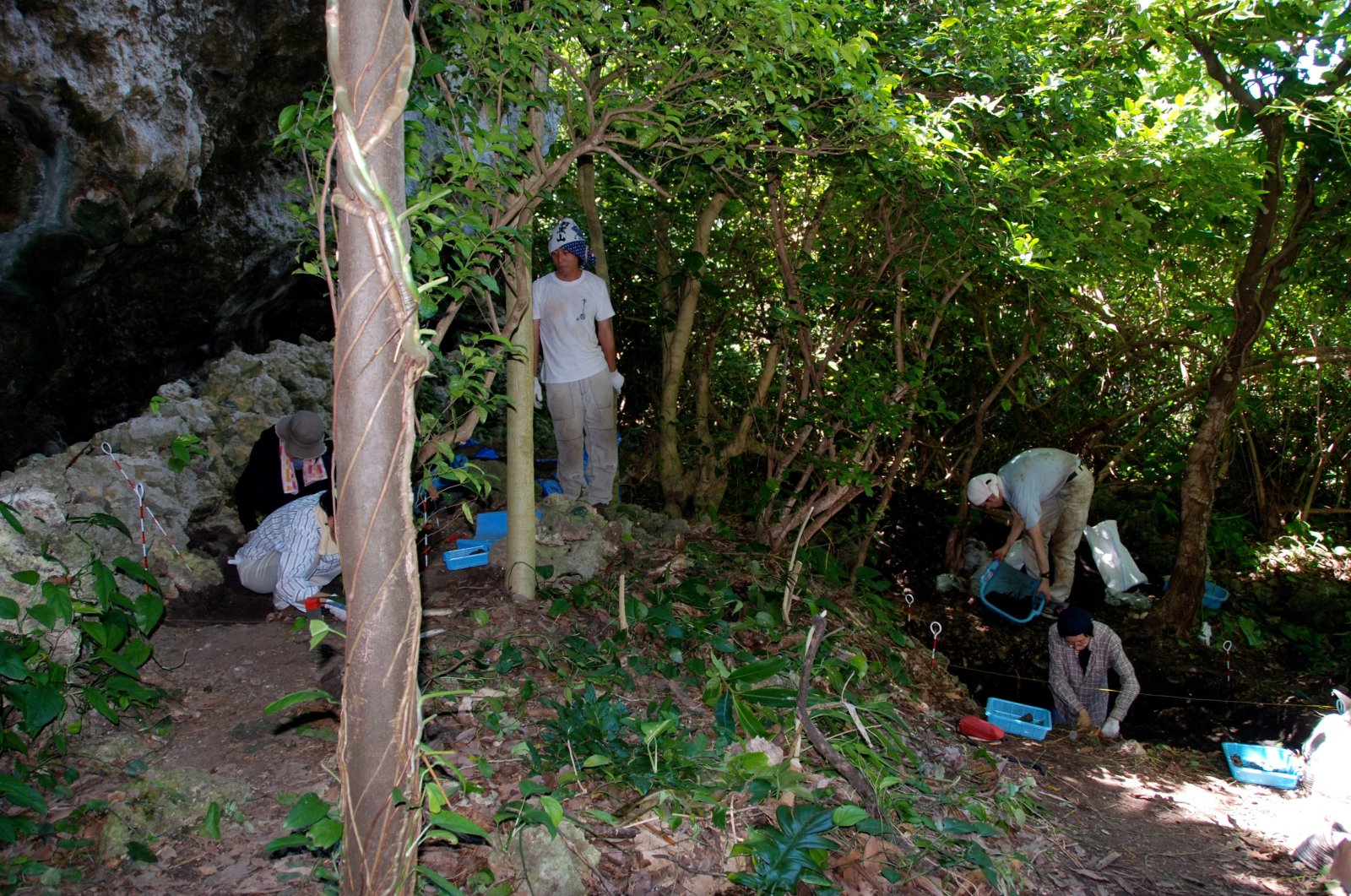 Researchers engage in archaeological excavations at the Nagabaka site on Japan's Miyako island as part of a study that explored the origins of the Transeurasian languages such as Japanese, Korean and Turkish spoken by millions of people in this undated handout photo supplied on Nov. 10, 2021. (Mark Hudson/Handout via Reuters)
by REUTERS Nov 11, 2021 3:36 pm
RECOMMENDED

The origins of a family of languages including modern Japanese, Korean, Turkish and Mongolian date back some 9,000 years to millet farmers that inhabited northeastern China, a study found after evaluating linguistic, genetic and archaeological evidence.

The findings detailed on Wednesday document a shared genetic ancestry for the hundreds of millions of people who speak what the researchers call Transeurasian languages across an area stretching more than 5,000 miles (8,000 kilometers).

The findings illustrate how humankind's embrace of agriculture following the Ice Age powered the dispersal of some of the world's major language families. Millet was an important early crop as hunter-gatherers transitioned to an agricultural lifestyle.

This language family's beginnings were traced to Neolithic millet farmers in the Liao River valley, an area encompassing parts of the Chinese provinces of Liaoning and Jilin and the region of Inner Mongolia. As these farmers moved across northeastern Asia, the descendant languages spread north and west into Siberia and the steppes and east into the Korean peninsula and over the sea to the Japanese archipelago over thousands of years.

The research underscored the complex beginnings for modern populations and cultures.

"Accepting that the roots of one's language, culture or people lie beyond the present national boundaries is a kind of surrender of identity, which some people are not yet prepared to make," said comparative linguist Martine Robbeets, leader of the Archaeolinguistic Research Group at the Max Planck Institute for the Science of Human History in Germany and lead author of the study published in the journal Nature.

"Powerful nations such as Japan, Korea and China are often pictured as representing one language, one culture and one genetic profile. But a truth that makes people with nationalist agendas uncomfortable is that all languages, cultures and humans, including those in Asia, are mixed," Robbeets added.

The researchers devised a dataset of vocabulary concepts for the 98 languages, identified a core of inherited words related to agriculture and fashioned a language family tree.

Archaeologist and study co-author Mark Hudson of the Max Planck Institute for the Science of Human History said the researchers examined data from 255 archaeological sites in China, Japan, the Korean peninsula and the Russia Far East, assessing similarities in artifacts including pottery, stone tools and plant and animal remains. They also factored in the dates of 269 ancient crop remains from various sites.

The researchers determined that farmers in northeastern China eventually supplemented millet with rice and wheat, an agricultural package that was transmitted when these populations spread to the Korean peninsula by about 1300 B.C. and from there to Japan after about 1000 B.C.

The researchers performed genomic analyses on ancient remains of 23 people and examined existing data on others who lived in North and East Asia as long as 9,500 years ago.

For example, a woman's remains found in Yokchido in South Korea had 95% ancestry from Japan's ancient Jomon people, indicating her recent ancestors had migrated over the sea.

"It is surprising to see that ancient Koreans reflect Jomon ancestry, which so far had only been detected in Japan," Robbeets said.

The origins of modern Chinese languages arose independently, though in a similar fashion with millet also involved. While the progenitors of the Transeurasian languages grew broomcorn millet in the Liao River valley, the originators of the Sino-Tibetan language family farmed foxtail millet at roughly the same time in China's Yellow River region, paving the way for a separate language dispersal, Robbeets said.