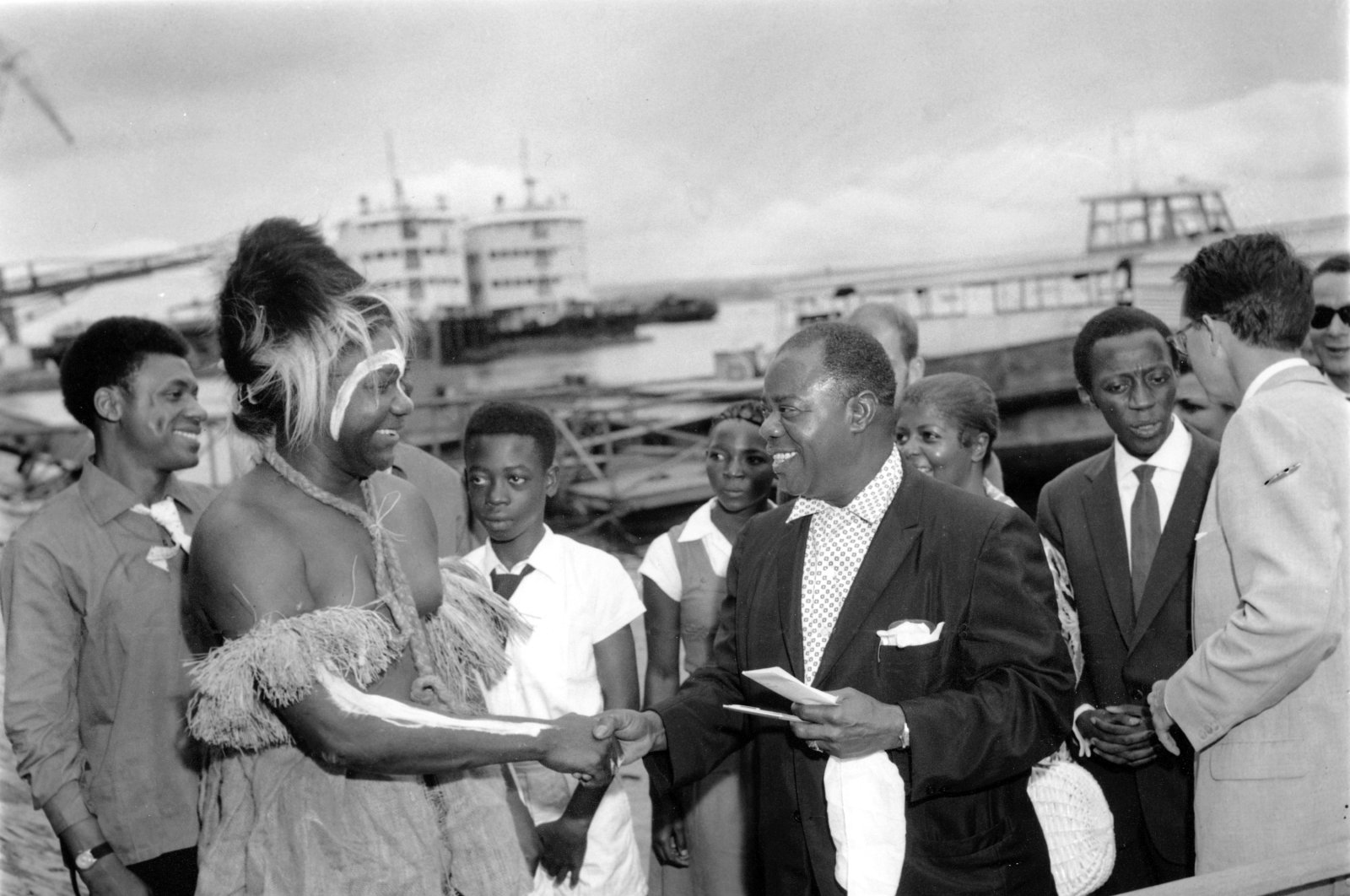 American jazz musician Louis Armstrong is greeted by Bolela, the Akuku tribal chief in costume, on the beach on his arrival in Leopoldville, Congo, Oct. 28, 1960. (AP Photo)
by DAILY SABAH Sep 14, 2021 9:14 pm
RECOMMENDED

The fame of the trumpeter has allowed his “spy hosts,” including the head of the CIA in Congo to receive crucial information, a Guardian review has said which would even “facilitate some of the most controversial operations of the entire cold war.”

The book – written by Susan Williams, a research fellow at London University’s School of Advanced Study – exposes the CIA’s activities across central and west Africa in the 1950s and early 60s, which read: “Armstrong was basically a Trojan horse for the CIA. It’s genuinely heartbreaking. He was brought in to serve an interest that was completely contrary to his own sense of what was right or wrong. He would have been horrified.”

The book published as a result of the documents found in the U.N. achieves during five years of research which revealed that CIA station chief Larry Devlin, who was Armstrong’s host, along with other intelligence officers has used the musician’s fame as cover.

Particularly, his access to strategically important Katanga was favored by Washington with all the city’s offerings from the opportunity to meet high-ranking officials to “crucial mining infrastructure, with 1,500 tons of uranium and vast potential to procure more.”

The CIA officials more than welcomed the opportunity to enter the wealthy province with Armstrong’s famous band as “they needed a cover and this gave them one,” says Williams.

The mission that Armstrong wasn’t aware of was more than that. CIA was also interested in “killing” the Congo’s first democratically elected Prime Minister Patrice Lumumba as Washington was worried that the 35-year-old leader would turn his country into a “Soviet camp.”

Yet, historians now suggest Lumumba was rather interested in maintaining his country’s neutrality during the Cold War.

He was killed with global outrage came after and although CIA had never accepted that they were responsible, “In 1975, Devlin told a government inquiry in the US that the agency had been trying to assassinate the nationalist leader over previous months but had ceased their operation long before the actual murder.”

Devlin later claimed that the CIA was responsible, telling a U.S. Congressional investigation “that the coup of Mobutu ... was arranged and supported, and indeed, managed, by the CIA.”

Williams says the found evidence casts doubt on the reliability of Devlin’s testimony adding that U.S. documents show that the “CIA station chief sent an agent known as WI/ROGUE to Thysville, the town where Lumumba was imprisoned in the weeks before his death, well after the agency claimed to have dropped all interest in the possible assassination of the popular politician.”

“We can’t say what WI/ROGUE did in Thysville but it does undermine Devlin’s reliability at the very least,” said Williams.

The CIA, meanwhile, which had developed a wide range of spy network who worked with helpers or collaborators and clients in the African continent was blamed for various significant events of Africa’s post-colonial history from arrests of Nelson Mandela to the overthrow of Ghana’s first president, Kwame Nkrumah, in a military coup in 1966.