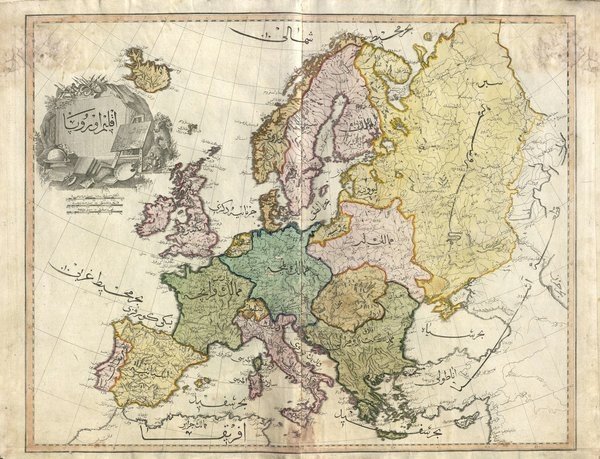 An Ottoman atlas, discovered in the attic of a historical house in Britain, was sold for 86,250 pounds ($115,850). The atlas was reported to be 'the first printed atlas in the Islamic world'

An Ottoman atlas found in the attic of the historical house Weston Hall in the Northamptonshire region of Britain was sold for 86,250 pounds ($115,850) at auction.

Only 50 copies of the Ottoman atlas that belonged to the Sitwell family and were kept at the manor for more than 300 years were ever printed, according to an Anadolu Agency (AA) report quoting the BBC.

Dreweatts Auction House stated that the Ottoman atlas in question was "the first atlas printed in the Islamic world."

The extremely rare atlas sold to a British buyer for 86,250 pounds, more than four times the pre-auction estimate.

Denise Kelly, an expert at Dreweatts Auctions, commented on the atlas: "This is a great atlas. The condition of the binding, the geographic maps and the celestial map is outstanding. It's a fascinating item to sell."

It is believed that the atlas was brought to Britain by Gen. Lord Hely-Hutchinson, a member of the Sitwell family.

Meanwhile, the rector of the National Defense University (MSÜ), professor Erhan Afyoncu, spoke about the intriguing story and features of the atlas to Turkish daily Sabah. Afyoncu explained where and how the atlas, which has the distinction of being the first printed in the Islamic world, was produced.

'Known as the Üsküdar Atlas'

The professor said: "The atlas prepared by W. Faden was translated into Turkish by Resmi Mustafa Ağa and published as the Atlas-ı Kebir Tercümesi (Cedid Atlas Tercümesi). It is also known as the 'Üsküdar Atlas.'"

"This work, which is the first atlas printed in the Islamic world, has 24 colored maps. The maps are hand-colored. The atlas is 36x53 (centimeters) in size. The maps are larger in size," he outlined.

Afyoncu further explained: "Therefore, very few atlases have survived to the present day. It is estimated that there are around 20 atlases in complete and incomplete copies today. Only 50 copies of the atlas were printed, excluding the copies given to the sultan, statesmen and the mühendishane (imperial engineering school) library, which burnt down during the Alemdar Incident while they were in the mühendishane warehouse."

A few years back, another copy of the scarcely printed atlas that was unwittingly being kept in the archives of the National Library of Norway was discovered in Norway in 2017.