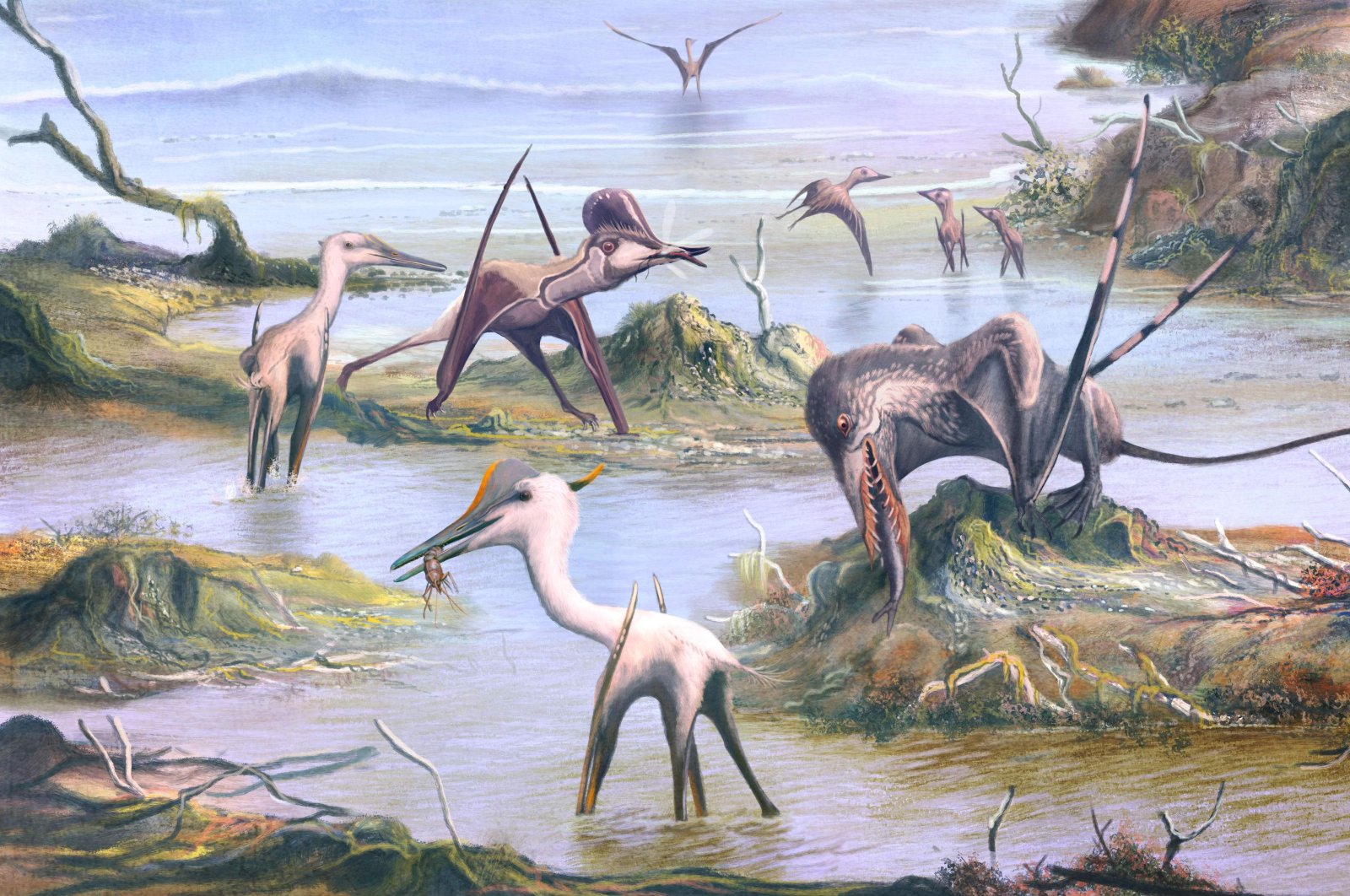 This handout picture released by the University of Birmingham on October 28, 2020, shows an artist's impression of a scene from southern Germany 150 million years ago, depicting the varied diets of pterosaurs, as inferred by dental microwear texture analysis. (Photo by Mark WITTON / UNIVERSITY OF BIRMINGHAM / AFP)
by French Press Agency - AFP
Oct 29, 2020 1:55 pm

By the time they were wiped out alongside their dinosaur cousins, most winged pterosaurs had evolved from awkwardly airborne to lords of the primeval skies, according to new research published Wednesday.

Pterosaurs, the first creatures with a backbone to fly under their own power, emerged during the late Triassic period more than 200 million years ago and include some of the largest animals ever to take to the air.

Paleontologists are still piecing together details of the lives of these winged reptiles, which were neither dinosaurs nor birds, that soared above Tyrannosaurus rexs, Triceratops and other dinosaurs of the late Cretaceous period.

In one of two studies published in Nature on pterosaurs, researchers in Britain found the creatures were initially ungainly fliers but the study, which used statistical methods, biophysical models and fossil records, said that pterosaurs spent 150 million years perfecting their flying skills.

"As pterosaurs became more efficient at flight, they could soar for longer and longer distances before they would need to land," she said.

Scientists have identified dozens of species of pterosaur scattered across the planet. They range from creatures barely bigger than a sparrow to giants as tall as a giraffe and with the wingspan of a fighter jet. They were wiped out with the dinosaurs and most other forms of life when a massive space rock slammed into Earth some 65 million years ago.

Much of the increase in their flight efficiency was down to their expanding wingspan, Baker said.

"Over the millions of years they existed, wings got bigger and bigger – and generally speaking – the bigger the wing, the better an animal can fly!" she said.

But even considering the improvements associated with a larger size, Baker said their flight efficiency still increased over time by more than 50%. The exceptions were among the giants of the pterosaur family, the azhdarchids.

Previous research has suggested that these huge animals spent more time on the ground than other pterosaurs, and the authors found that although they could fly, their performance in the air did not increase over time.

"Our results provide support for the idea that these creatures which dominated the skies may also have been on the path to staking out a claim on some of the land, as well," Baker said.

In a second paper also published in Nature, researchers from the Universities of Leicester and Birmingham analyzed the microscopic scratches and pits on the fossilized teeth of these flying predators to determine what they ate and how their diets changed over time.

The study looked at 17 species of pterosaur that lived between 208 and 94 million years ago and compared the marks on their teeth to modern crocodilians and monitor lizards.

"Consumption of crunchy foods (shells, bones, etc) will create rough textures, while consumption of soft foods (fish and flesh) will create smoother textures," said lead author Jordan Bestwick, who was a researcher at Leicester at the time of the study.

It found that while the earliest pterosaurs consumed mostly invertebrates, later species had evolved into meat and fish eaters.

"What was really interesting is that this dietary shift sped up around the 150-million-year mark which is around the same time that birds were evolving," Bestwick told AFP.

He said more research is needed to determine if this transition could be down to competition with the first birds, which he said were "pretty poor fliers" around the size of a pigeon and likely focused their feeding on easy-to-catch foods like insects.

He said if the birds were able to get an edge on this type of prey over small-bodied pterosaurs then perhaps "pterosaurs that could grow larger and catch larger animals, such as fish or reptiles, would have a higher chance of survival".