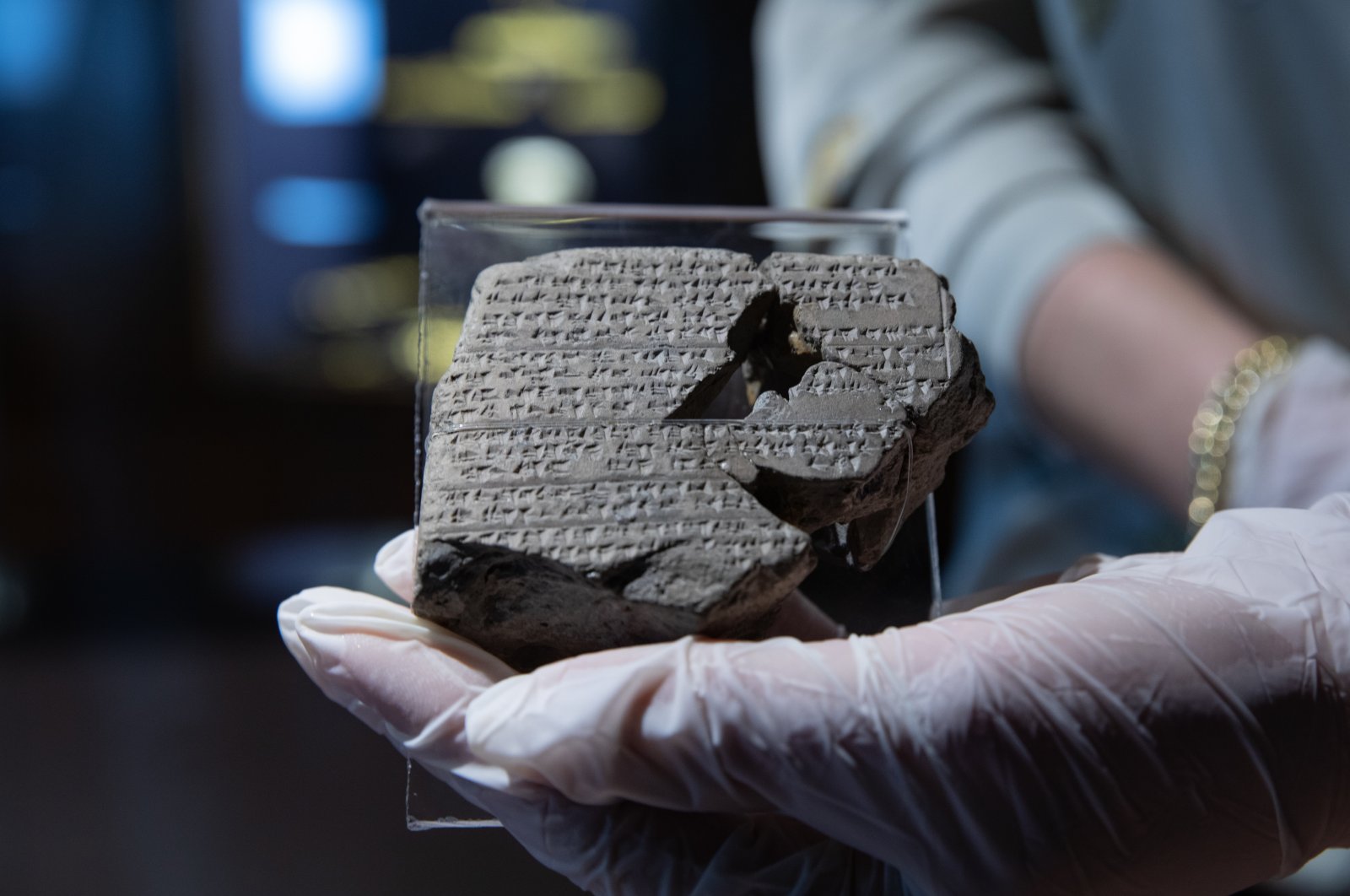 A staff member holds one of the four 3,500-year-old tablets describing several rituals are on display as part of the Izmir Archeology Museum's "You Will See What You Can't See" project, Izmir, Turkey, Dec. 11, 2021. (AA Photo)
by Anadolu Agency Dec 12, 2021 4:17 pm
RECOMMENDED

Four rare 3,500-year-old tablets from the Hittite Empire describing festivals, mythological marriages and rituals for magic are now on display in a new exhibitition at the Izmir Archaeological Museum on Turkey's Aegean coast.

The clay cuneiform tablets were the final unique pieces to be added to the collection for the museum's monthlong "You Will See What you Can't See" exhibition.

The pieces are just a few of the approximately 50 tablets that were sent from the Anatolian Civilizations Museum to the Izmir Archeology Museum by the General Directorate of Museums in 1930 upon the instructions of republic founder Mustafa Kemal Atatürk. They were then placed in storage and preserved for 90 years.

Several of the tablets were recently taken out for reexamination by experts from Ankara University's Department of Language, History and Geography in cooperation with its Department of Hittitology and the Museum of Anatolian Civilizations.

Though a number of the tablets were interpreted and read in the 1970s and scientific studies on others were ongoing, Keser said: "Every sentence and every letter on the tablets contains new information. We have learned from the tablets that the Hittites had about 170 holidays. Holidays were always celebrated under the leadership of the king and the chief god. They made up 38 days on the calendar. All of them had different rituals."

Emphasizing that the tablets are priceless both academically and historically, Keser said: "The Hieros Gamos (Holy Marriage) we have come across in Greek and Roman mythology is also seen here. The goddess Ishtar was popular about 3,500 years ago. In some examples, we believe a holy marriage with the shepherd god Dumuzi and the goddess is explained,” he said.

He also pointed out the significance of several tablets being read for the first time.

In addition to the Hittite artifacts, other unique pieces such as the scraping tool called "strigilis" used to clean oil and sand off the bodies of gladiators and athletes, fairy figurines and Ushabti figurines brought from Egypt will also be on display during the exhibition throughout 2021.