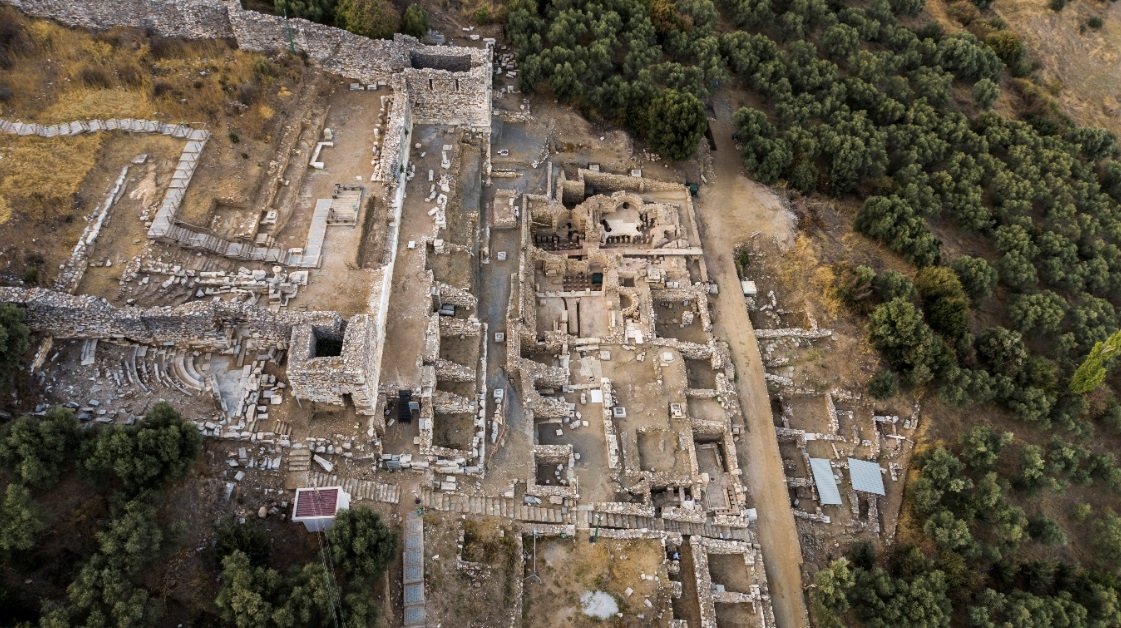 Archaeological work at the classical city of Metropolis, also known as the city of “Mother Goddess” in modern-day Izmir province in western Turkey, has unearthed four previously unknown and interconnected cisterns. The cisterns, along with the remains of food, animal bones and pieces of ceramics found in the excavations, have shed new light on the eating habits of ancient residents of the city, located between the Yeniköy and Özbey neighborhoods of Torbalı district in Izmir.

“We are excited to open a new door to the daily lives of ancient people that lived in the region 1,500 years ago. The new discovery of four cisterns in the acropolis prove the skills of the ancient masters of Metropolis in the field of water engineering,” he told Demirören News Agency (DHA).

The cisterns have been discovered in the acropolis, essentially a Greek citadel built on the elevated ground of the city. They were found under a 7-meter area filled with earth. The four cisterns are thought to have been built in the late Roman and Byzantine period to provide water to the acropolis, located on the highest ground of the city, in the event of a siege, with an estimated total water capacity of 600 tons.

The fact that the cisterns remain almost completely preserved offers a unique historical and archeological insight into the daily lives of the city’s ancient dwellers.

“(We) estimate that the cisterns supplied water to the entire settlement on the lower slopes of the acropolis, and particularly to the upper bathhouse structure. The cisterns, which are approximately three floors tall, are also of great importance in terms of being the best-preserved monuments in Metropolis,” Aybek said.

Numerous food remains, animal bones and ceramic pieces have also been discovered in and around the cisterns with glazed ceramic pieces adorned with plant and animal figures making up most of the remains. It is believed that in time, the cisterns were converted into garbage dumps during the 12th and 13th centuries. After thorough examinations of the animal bones found in the cisterns, ancient people were found to widely consume bovine, ovine and poultry.

Further excavations around the cistern area also led to the discovery of marble architectural pieces, thought to belong to the Hellenistic period, with a rectangular altar and an honoring inscription among the most important findings.

Nevgül Bilsel Safkan, general manager of the Sabancı Foundation, which has been supporting the excavations since 2003, stated that they are incredibly happy with the findings made in the Metropolis excavations.

“The four adjacent cisterns found during the excavations this year in Metropolis, the city of the Mother Goddess, offer important information on the city’s water needs, eating habits, objects used in daily life and their defense strategies. We are extremely happy to be able to shine a light on the lives and wisdom of the ancients,” she told DHA.

Archaeological work on the ancient site, which began in 1990, has been ongoing for 30 years. The newest excavations started in July 2020. The ancient city houses remains from the Neolithic Age, the Hellenistic period, the Roman and Byzantine periods right up to the Ottoman Empire.

So far, a Hellenistic-era theater, Bouleuterion (assembly building), stoa (gallery with columns) and two bath structures built in the Roman Empire period, a bath and palaestra (sports field) complex, mosaic hall, Peristyle House, shops and other structures such as public toilets, avenues and streets have been unearthed.

The other fruits of the archeological work in Metropolis have been the discovery of more than 11,000 historical artifacts consisting of ceramics, coins, glass, architectural pieces, figures, sculptures, bone and ivory artifacts and many metals. The artifacts are exhibited at the Izmir Archeology Museum, the Izmir History and Art Museum and the Selçuk Ephesus Museum.