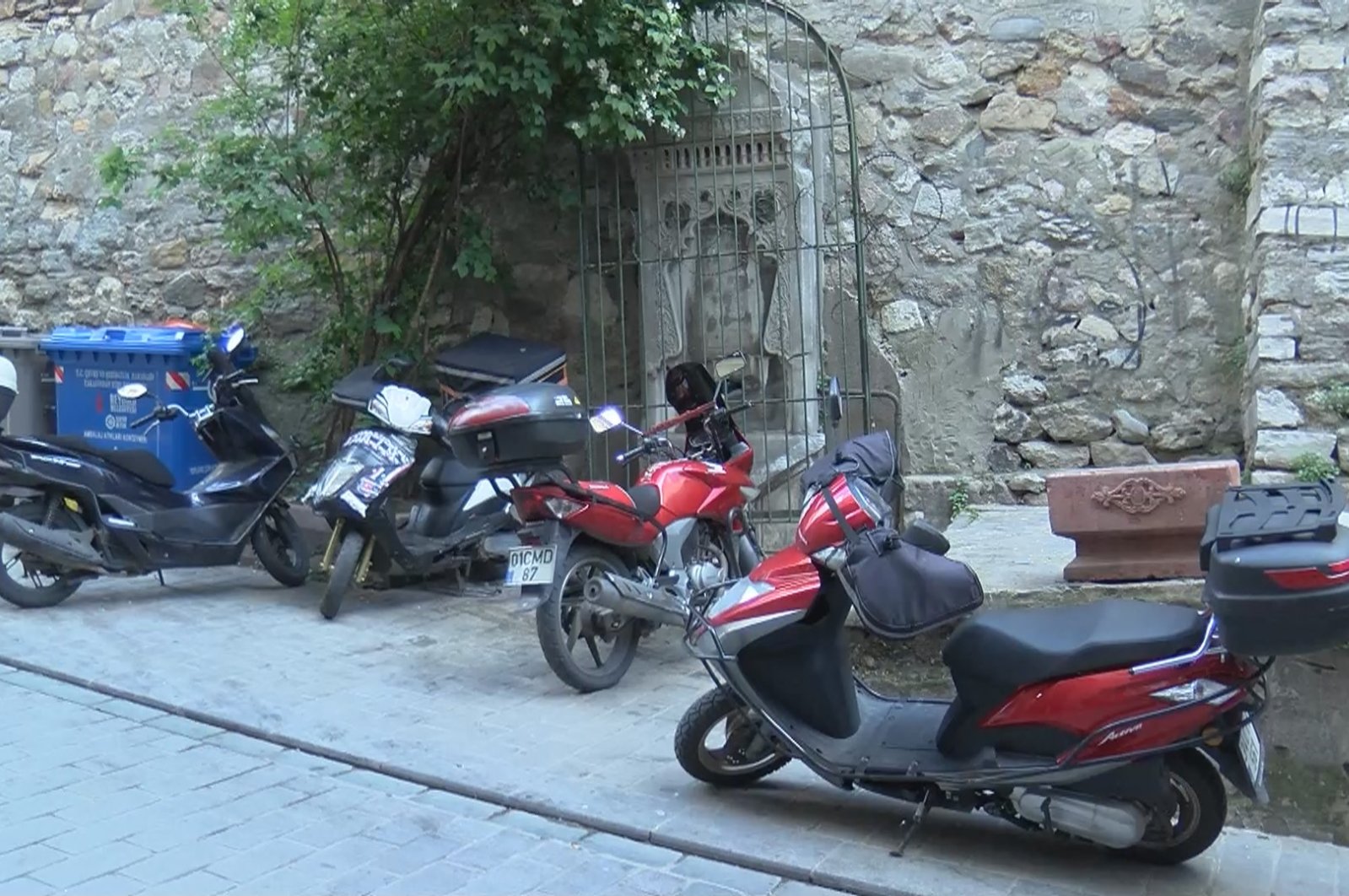 This file photo shows the historic fountain behind a protective cage and parked motorcycles in Galatasaray quarter in Istanbul, May 24, 2021. (DHA Photo)
by Daily Sabah Dec 07, 2021 10:36 pm
EDITORS PICK

The poor condition of a historic fountain built in Istanbul at the turn of the 20th century and later placed behind a protective cage was once again raised by a concerned Turkish historian in a tweet on Tuesday.

"The fountain has been condemned to life in prison," Hasan Mert Kaya, Islamic history editor and writer, said in the tweet, adding that the Ottoman-built fountain is located in the Galatasaray quarter, which sits on the famous Istiklal Street of Istanbul's Beyoğlu district.

“The fountain reportedly provides water to 300-500 people each day. It seems like it deserved its punishment,” another Twitter user joked, prompting a call from the historian for proper restoration.

“Jokes aside, this fountain has been in this condition for years now. It has leaned back on the wall of Galatasaray High School and has become a neighbor of it,” Kaya added in a follow-up tweet, referring to a centuries-old educational institute best known for Galatasaray Sports Club, which was founded by its students led by the Lions’ first President Ali Sami Yen.

“There are many wealthy people living in Istanbul that have graduated from this school. Loyalty is most required during such times,” he added, calling upon the Galatasaray Education Foundation to help restore the fountain to its former glory.

Several other handles focusing on preservation also brought the issue forward in different periods but to no avail.

A report by Demirören News Agency (DHA) issued earlier in May stated that the fountain was erected in 1901 on Istiklal Street for the 25th anniversary of Sultan Abdülhamid II's coronation. The fountain previously sat in front of the Galatasaray Police Station, which was torn down in 1942 to make way for a larger square, while the fountain itself was relocated to its current spot on an adjacent street.

Historian Süleyman Faruk Göncüoğlu told DHA that the Hamidiye Fountain was constructed in a neoclassical style and was among the examples of modern water distribution systems compared to centuries-old fountains located throughout the city. The fountain's basin has been broken and weeds growing through its cracks lead to further destruction, Göncüoğlu had explained, calling on authorities to relocate the historic structure to Istiklal Street and restore it to its original function.