Turkish and Ottoman traditions for Eid al-Fitr: A time for gratitude 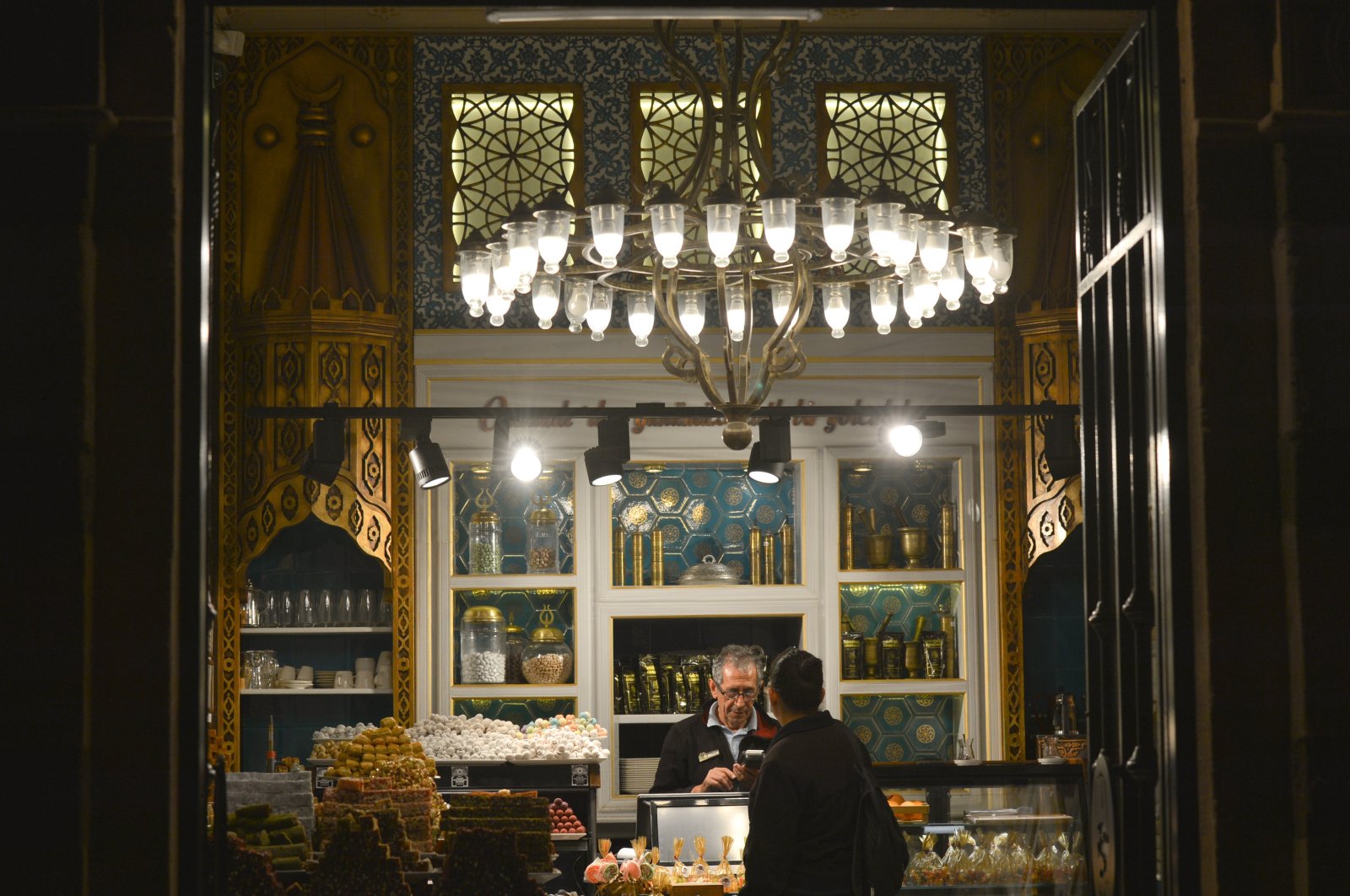 A night view of Halis Bekrizade Efendi, the mecca of baklava and Turkish delight, on Tuesday, Oct. 17, 2017, in Istanbul, Turkey. (NurPhoto via Getty Images)
by Leyla Yvonne Ergil May 12, 2021 12:20 pm
RECOMMENDED

As the world embarks on the three-day holiday of Ramadan Bayram, also known as Eid al-Fitr, from May 13-15, marking the end of the holy month of Ramadan in which devout Muslims practice a 30-day fast, this is an opportune time to take a look at some of the unique Turkish traditions for celebrating what is often referred to in Turkey as Şeker Bayramı.

You say Şeker, I say Şükür

Now one may wonder why it is that in Turkey, unlike anywhere else in the world, the holiday of Eid al-Fitr is referred to as Şeker Bayramı, which is commonly translated as the “Sugar Feast.” You may assume that it is due to the copious amounts of candy and sweets that are consumed after the majority of Turks have just spent the past month eating at restricted hours. This is of course because, during Ramadan, Muslims around the world embark on a fast from dawn to dusk in what is actually the world’s largest communal fasting event. But in fact, the holiday’s name of Şeker Bayramı in Turkey is actually believed to be the result of a mispronunciation. That’s right, supposedly originally the holiday was referred to as “Şükür Bayramı” in other words “a holiday to be grateful.” According to Ottoman era expert Murat Bardakçı, the two words “şükür” (gratitude) and “şeker” (sugar) were spelled using the same characters in the Ottoman alphabet and thus in time, the meaning of the holiday was misconstrued. According to Bardakçı, the term şükür was used in reference to the gratitude felt by those who had fulfilled their religious duties by way of fasting. Meanwhile, the late academic Güngör Uras claimed that the reason Eid al-Fitr is referred to as the “Sugar Feast” in Turkey is due to the Ottoman tradition of the palace offering trays of baklava to their soldiers on the 15th day of the fast, which they would then parade around town to the delight of onlookers as they made their way to the barracks where they stayed. The “sweet” reference is also relevant in that one of the most prevalent customs surrounding the Ramadan holiday is the offering of pocket money to children, who then spend it on buying candy. No matter how they used to say it, the Şeker Bayramı moniker was the one that stuck and is symbolic of the prominent place sweet treats take in Turkey during this three-day holiday, a tradition that spans back to the Ottoman Empire. These days, however, it is widely acknowledged that the correct way to refer to the holiday is Ramadan Bayramı.

The holiday of everything meaningful

There are actually a number of traditions surrounding Eid al-Fitr that began in the Ottoman Empire, some that continue to be practiced in modern times and some of which have unfortunately fallen by the wayside. Either way, this year the holiday will be celebrated extremely untraditionally as it falls during the country's severest lockdown since the start of the pandemic.

For those expats who may feel confined in Turkey at this time, just think of how much the Turks are suffering as they are unable to conduct their usual traditions during the holiday, which in Turkey is literally the equivalent of Halloween, Thanksgiving and Christmas combined. I say Halloween in reference to the steadfast tradition of offering candy to children, who in normal times would have gone door to door in their neighborhood for trick or treating.

If the aforementioned original name of the holiday itself is not evidence enough, the reason this holiday is reminiscent of Thanksgiving is its strong sentiment of gratitude as well as the overt practice of offering charity to those less fortunate. For Westerners to best understand the importance of this holiday now upon us, I would say that it resembles Christmas in that it is one of the two longest and most significant holidays in Turkey and is traditionally spent with family and visiting elders, sharing food and gifts and dressing up in your finest.

Throughout history, the Ramadan holiday was a time of sharing tables, visiting neighbors and family and taking walks to enjoy all of the outdoor entertainment on offer, such as theatrical performances and shadow puppet shows, referred to as Hacivat and Karagöz, a practice that is near synonymous with this cherished time of year. In fact, unfortunately, it will be the children of Turkey who will lose out the most being kept indoors due to the necessity of curbing the spread of the pandemic.

In addition to children, those that are less fortunate are also unable to benefit from the tradition of shared “iftar” meals, which are an integral part of the traditions surrounding this month and a custom spanning back to the Ottoman Empire. In fact, in Ottoman times, not only would everyone and anyone be welcomed to join in a breaking of the fast “iftar” meal, but the host would actually distribute small pouches of silver or gold coins to their less fortunate guests in a custom once referred to as “diş kirası,” which translates into English as teeth rent. Yet another charitable Ottoman tradition was for the well-to-do to visit their local markets and pay off a strangers’ debt, which used to be recorded in notebooks as a general practice of offering credit to customers. The stranger whose debt was paid off would never learn who the bestower of that kind gesture was.

It was the Ottomans who kicked off the tradition of firing a cannonball (in 1821 and from the Anatolian Fortress, or Anadolu Hisarı) to mark the start of iftar to break the fast, and the dusk drummers that wander the streets to wake people from their slumber is also a tradition that spans back to the Ottoman Empire. Neighbors would knock on doors to distribute the delicious fried bread referred to as "pişi" and the delicious and healthy Ottoman sherbets that are said to have surfaced as a result of Ramadan.

In Ottoman times, during the month of Ramadan and the holiday that followed it, celebrations took place in a carnival-like atmosphere and baklava parades by janissaries – the main elite unit of the Ottoman army – and street performances are proof of that. But in the Ramadans of yore, there truly were so many more beloved and exciting traditions that took place.

The courtyards of Istanbul's largest mosques such as Sultan Ahmet, Hagia Sophia and Eyüp Sultan would host exhibitions and fairs in which stalls would sell anything and everything one could imagine. There used to be colorful oil lantern soaring shows as well held after the evening prayer in which decorated lanterns were strung up between minarets and mosque courtyards. Children would go door-to-door with an oil lamp to request pocket money for which they would recite a tongue twister in a tradition that has since transformed into children being gifted candy when they come knocking on the door.

During Ottoman times, the sultan himself would kick off the celebrations for Ramadan by kissing his mother’s hand and distributing pocket money to children in decorative small pouches. Kissing the hand of an elder and then touching their hand to your forehead is another foremost tradition of this holiday that may have to be foregone this year, as will the tradition of paying visits to the eldest members of the family. However, as the customs from the Ottoman era prove, times change and Turks learn to adapt and continue to feel grateful for all that they have.