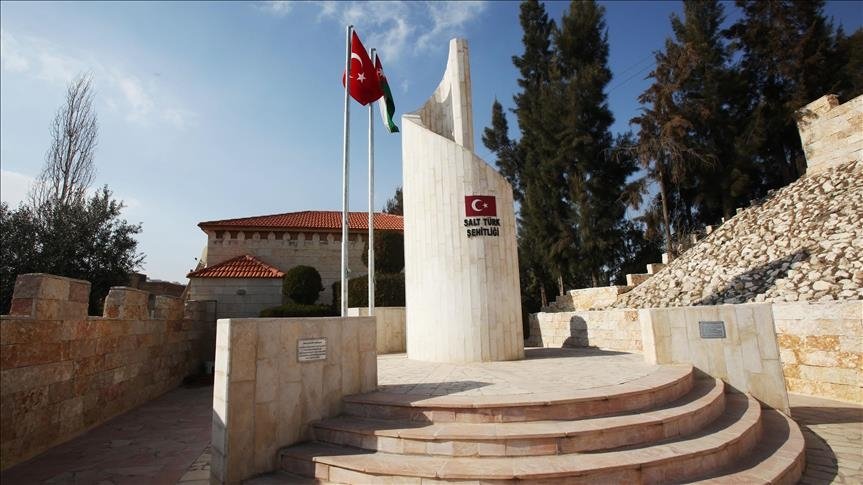 The Turkish war memorial in the Jordanian city of Salt – once the Ottoman Empire's center in Jordan – keeps alive the cherished memory of the heroic Turkish soldiers who were martyred defending their homeland.

The Salt Turkish War Memorial located near Amman, the capital of Jordan, honors the nearly 300 Turkish soldiers belonging to the 4th Army 48th Division and the 143rd, 145th and 191st Infantry Regiments, who were martyred as they heroically defended the area against the British between March 24-26, 1918.

During World War I, a handful of soldiers tasked with protecting the city of Salt and the Jordan Valley, which is a gateway on the Palestine-Jordan road, did not give way to the enemy army – not for a moment thinking of retreating – and fought right up until they were martyred.

The bodies of these heroes who died for their homeland were found in a small cave in 1973, years after the war. The memorial, which started to be built in November 1989 in memory of the heroic soldiers, takes its present form with the restoration works that were recently carried out. At the memorial in Salt, located 30 kilometers (18.64 miles) northwest of the capital Amman, visitors are greeted by a monument inscribed with the names of the heroic soldiers who died for their homeland in this land about a century ago.

The monument lists the names of 172 martyrs, 168 of whom were born in Turkey and four of whom were born in Amman, who have been identified so far. Inside the cave, there is a representative tomb built for the memory of the martyrs and the Quran is recited nonstop for 24 hours a day.

Next to the cemetery, there is also a museum, which was opened in 2009. Here, photographs describing the heroism of the Ottoman troops in the region, as well as the uniforms worn by the soldiers of the period and the equipment they used, are exhibited.

The memorial, which was built on land belonging to the Jordanian Foundations Administration, is affiliated to the Ministry of Foreign Affairs through the Turkish Embassy in Amman. The monument is the biggest indicator of the strong bond between the two countries, Turkey's Ambassador to Amman Murat Karagöz said in a statement.

Karagöz added that the city of Salt, which bears the traces of the Ottoman Empire, has become one of the important places visited by tourists, especially with the Turkish war memorial built in honor of the soldiers who lost their lives defending their homeland on the Palestine-Sinai front.

Salt Mayor Khaled Hussein Al-Khashman Al-Fauri also said that they are proud of the Turkish soldiers who were martyred while defending the city. Expressing that this is the holy land surrounding Al-Aqsa Mosque, el-Fauri explained that the Turkish war memorial, which has become one of the important symbols of the city, has a special value for them. Fauri said, "We are working to improve the environment of the memorial. In the coming period, we will publish historical research on the city of Salt, including the martyrdom and the role of the Ottoman State in the city."

A visitor to the war memorial said, "Although I am from Jordan, this is my first time coming here. This is a place worthy of the holy spirit of the martyrs. I recommend everyone visit. At least, they should know that 300 soldiers were martyred here while defending this land."