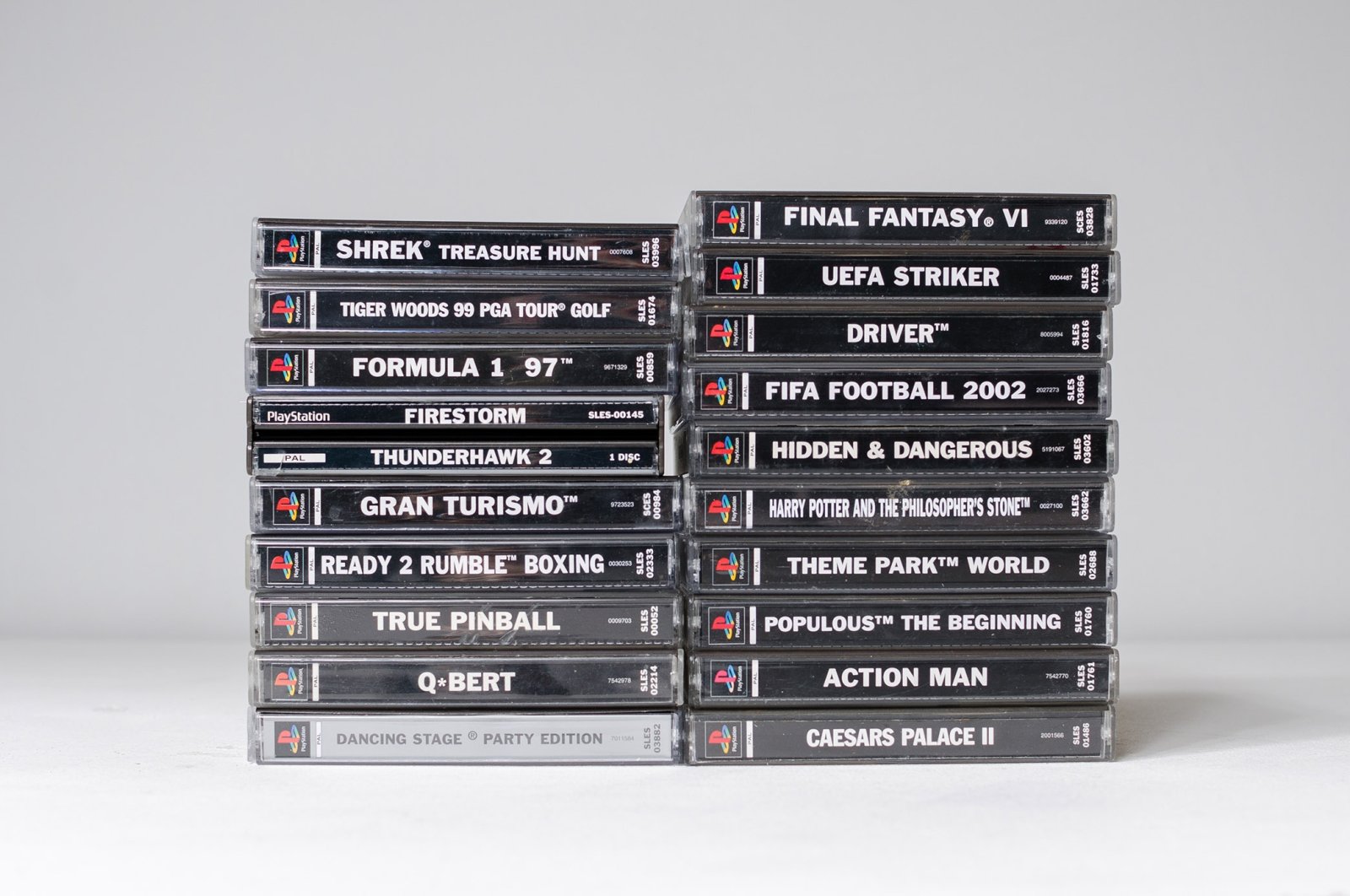 Since time travel has yet to be invented, we'll have to settle for the next best thing: reliving the fond memories

While smell has been proven to be the biggest trigger of memories, doing that perfect combo in Tekken 3 with your fingers, listening to old school soundtracks or feasting your eyes on 240p pixelated graphics can induce a wave of nostalgia.

As a geek obsessed with both nostalgia and gaming, there is nothing more emotion-evoking than playing the good ol' games from the original PlayStation era, widely known as “PSX” because of its codename while it was in early development.

As a retro gamer myself who lives in a country in which console gaming is synonymous with the PlayStation, I’ve been playing a lot of late 1990s/early 2000s PSX titles lately, as I have the modern iteration of the console, the PS Classic that has an HDMI output. Then I had an idea: what if I ripped all my physical discs, which I’ve been safekeeping for over 20 years because I’m a sentimental maniac, to keep the original contents forever?

And that’s what I did. And to save you from trouble, I'll share with you how I did.

Enter the world of emulation.

How to rip your physical discs

Before we begin, warnings are in order: keep your hopes low. Compact discs are a fragile media format when it comes to long-term archiving. That’s why any retro gamer should make backups to safeguard the content.

PSX discs are covered with a black layer that was expected to eliminate piracy back in the day, and they are fragile after over 20 years of use. Disc rot is also real, which naturally happens on the surface around the 20-year mark, and unfortunately, I experienced this with some of my titles. Your storage conditions, room temperature and humidity also affect this process.

The vast majority of my humble 40ish-piece PSX game collection did work just fine. Some of them struggled to read and some others were not even detected by the PC. So, expect a few failures if you decide to rip your PSX discs. Without further ado, let’s take a look at the process.

Before starting the ripping process, make sure to clean your CDs properly to know for certain whether the disc is done for, or still alive. To clean the disc, dampen a soft cloth with water, or preferably rubbing alcohol, and start wiping. Start from the center and work your way outwards.

Then you will need a simple and free application called “ImgBurn.” After downloading it from its official website and connecting the external DVD writer, run the app and wait for it to detect the disc. After it has properly detected the CD, click on “Create image file from disc.” Choose the destination you want to export the disc image to and voila, let ImgBurn do the magic.

Even though the PC recognizes the disc and the process seems to be continuing just fine, some discs may have a section that is faulty, which can hinder the image creation process. If the process goes smoothly, congratulations.

But if the program fails to create the image, you will receive a notification that it failed. If you have properly cleaned the disc before inserting it and it still fails after a couple of tries on ImgBurn, just keep the CD as a physical memoir and forget about the content. It was sitting idle and rotting in your drawer for over 20 years and died a hero’s death. Get over it and move on.

After you have rescued all the images you could from your ailing discs, it is time to "time travel."

I know retro game purists say the proper way to enjoy retro games is to play on the original hardware connected to a CRT television. But physical media is bound by this simple term: shelf life. PSX discs from the mid-1990s or even early 2000s won’t tolerate day-to-day use after decades. So, to be able to keep your archives safe and sound for the longest time possible, digitization, and hence emulation, is the way to go.

So, let’s take a look at our options:

As a retro gamer, I’m willing to buy a retro gaming-specific handheld like Anbernic RG350, which seems promising in PSX performance. Mac also seems like a solid platform for PSX emulation with the high-rated PCSX emulator, but I haven’t been able to try the app yet. I have given PSX emulation a try on my Windows PC and Android tablet so far, and both have worked just fine.

ePSXe is the long-running emulator for Windows PCs. After installing the app, put your PlayStation bios file in the “bios” folder in the ePSXe directory and load up your disc image extracted from the CD via the top-left menu. If you hit Alt + Enter, you will make it full screen with the proper 4:3 screen ratio – the way PSX games were meant to be played, not stretched out of proportion.

Using a DualShock 4 gamepad will be the easiest way to play PSX on your PC. Install the DS4Windows app first, then connect your controller to the PC via a USB cable, run the app and let it recognize the controller. After it has recognized the controller, select “Auto Profiles” from the top menu, click on “Add Programs” and choose the ePSXe folder that includes the bios folder. Click “OK,” and tick ePSXe from the list after it pops up in the “Auto Profiles” tab of the DS4Windows app.

Later on, head back to the ePSXe, head to Config > GamePads > Port 1 > Pad 1 from the top menu. When the menu opens, map all the buttons on your DS4 by choosing with your mouse and clicking on your gamepad one by one. After that, you will be good to go.

If that was too much of a hassle, let's look at my favorite.

Do you have at least a mid-range Android smartphone or tablet? If the answer is yes, look no further than DuckStation. It is the simplest way possible to immerse yourself in PSX games from that magical era.

Install the DuckStation app from the Google Play Store first. If your phone or tablet has an SD card slot, copy your PS1 bios file and your games onto it and insert the card into your device. If your device has none, you could download the files from cloud services or use a dongle to transfer files with a thumb drive to your phone or tablet.

Using a file explorer app like X-plore, copy your PlayStation bios file from the SD card or USB thumb drive to the namesake folder in the DuckStation directory. Create a folder named “games” in the same directory, and put your games in that folder. Using the internal storage of your Android device will be better for performance, as SD cards tend to be much slower in reading and writing speeds.

The setup is now complete. And the only thing you have left to do is to connect your DualShock 4 controller to your Android tablet by holding down the PS and Share buttons at the same time and selecting “Wireless Controller” in the Bluetooth menu of your device. Once it’s connected, you’re good to go.

Open up the DuckStation app and it will automatically recognize the controller. Select the game you want to play and enjoy a simple, seamless experience with a one-time easy setup.

The first games I’ve been able to play from my physical archive have been FIFA 99 and 2000, Crash Team Racing, Lucky Luke, the hidden gem Apocalypse, Spider-Man and Spider-Man 2: Enter Electro. Lest I forget, also the official Champions League 98-99 Season game with its admittedly wacky mechanics and beautiful Champions League theme. The fact that Galatasaray is included in it also makes it a must-play for a staunch fan like me.

It has been a wonderful blast to the past playing the old titles. It's incredible to even think for a second that I was 9 years old when I first played the exact same content I’m currently playing via emulation, and I’m now 30. Twenty-one years have passed, and those PSX classics still shine.

Let’s enjoy these oldies but goldies and pretend we are children, again.

DISCLAIMER: The advice contained within the article is best reserved for games whose original consoles are no longer on the market. Ripping copyrighted work, even for personal use, may be illegal in the country you are in. Downloading the games you do not own through illegal means constitutes copyright infringement.