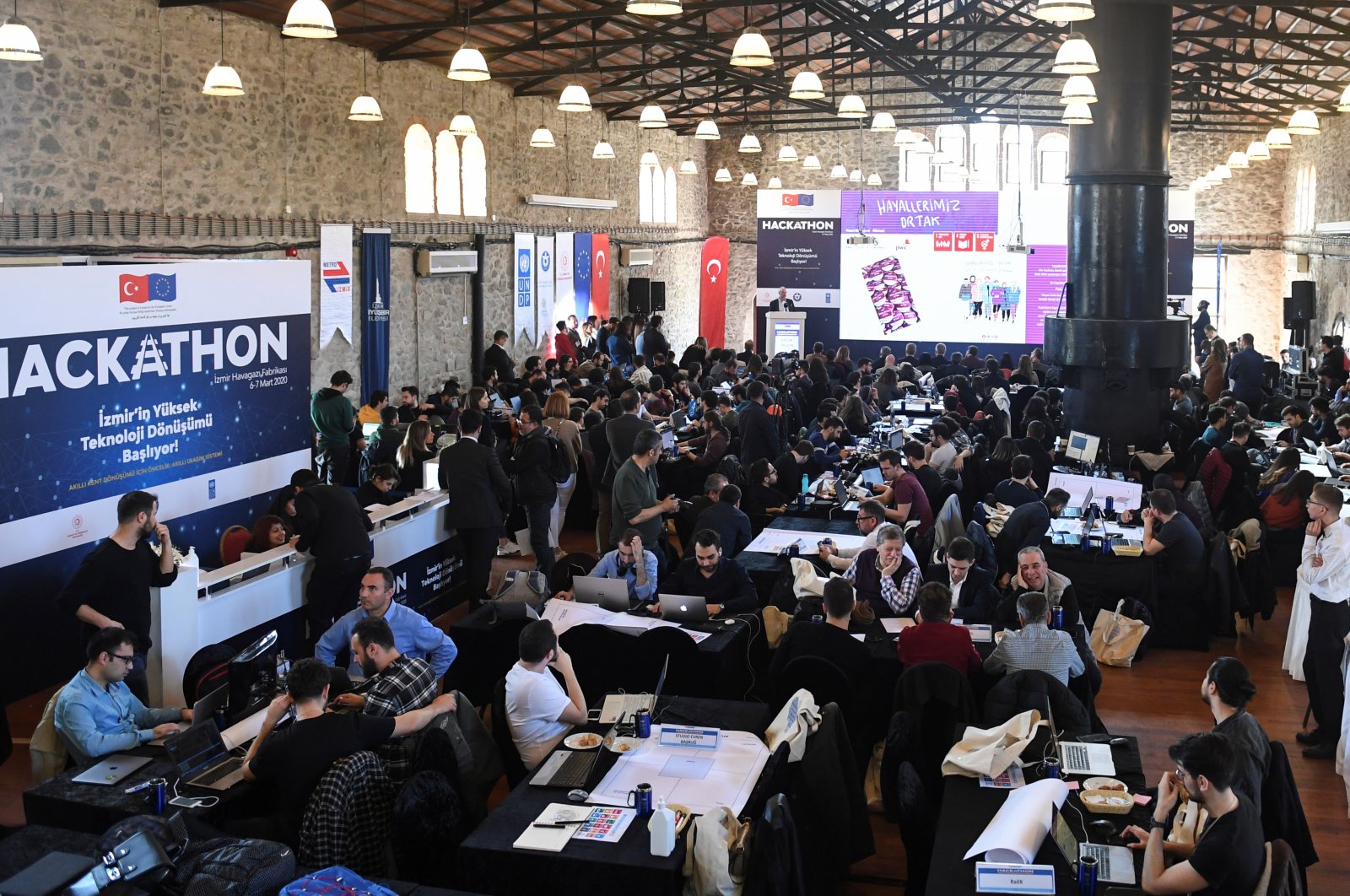 Smart cities are the future, and smart, innovative and green public transportation systems will be a prerequisite of this digital urban transformation. Here's how a hackathon organized jointly by the UNDP, the Industry and Technology Ministry and the İzmir Chamber of Commerce helped in eventually achieving that goal

Dozens of engineering students, software developers, entrepreneurs, designers and tech enthusiasts ferociously typed away at their keyboards, racing to come up with "the project" that would herald a new era of smart transportation systems for the smart cities of the future – in just under 24 hours.

The İzmir Transport Hackathon, held between March 6-7 to support the city's entrepreneurship ecosystem and encourage innovation and economic growth, saw 28 teams made up of roughly four to six people gather at the Historical Coal Gas Factory-turned cultural center in Alsancak in sunny İzmir to produce solutions for an environmentally friendly, sustainable, innovative and inclusive transportation network in the western metropolis.

There were so many projects that were forward-thinking and really pushed the limits, from live help apps that incorporated artificially intelligence screening and chatbots to blockchain technology; however, three teams’ projects came out victorious. The United Nations Development Program (UNDP) goodwill ambassador and Turkish actor Mert Fırat and fellow actor and voice artist Toprak Sergen presented at the award ceremony.

In first place came team Metrobot, who developed a user-oriented, artificial intelligence-based application to be used in processes related to the city’s transportation system. In second was Team 256, whose EagleEye app analyzed crowdedness in metro stations with mathematical data and offered optimized dynamic timelines for more efficient deployment of vehicles. Esvision took third place with its warning system that worked like traffic lights to regulate and divert passenger traffic during boarding and landing at railway stations. The groups took home TL 15,000, TL 10,000 and TL 5,000 as prizes, respectively.

The software hackathon was centered around the five following themes:

As the third event held by the recently-opened İzmir Innovation Center, the hackathon was organized by the UNDP, the Ministry of Industry and Technology and the Izmir Chamber of Commerce with the support of the İzmir Metropolitan Municipality.

The event served as a pioneer for such future projects, as it lifted municipalities' veil of secrecy so often criticized by citizens, with Izmir Metropolitan Municipality transportation subsidiary İzmir Metro A.Ş. giving participants access to its data to work with real-time big data to work on real-life solutions that emphasize sustainability, social benefit and accessibility.

The hackathon, which was organized as part of the job creation component of the UNDP’s Turkey Resilience Project in response to the Syria Crisis (TRP), also fostered friendships and partnerships between Syrian refugees living in Turkey and host communities, creating an environment of social cohesion flourishing with business opportunities.

Team 256 had three Syrian members, which were Hamed Alfaisal, Muhannad Al-Alwan and Mohammad Husam Khankan, who came to Turkey as refugees in 2015, 2016 and 2018, respectively.

Alfaisal’s story is one of perseverance, strength, and hardship. He came to Turkey via ambulance after being shot in an attack by the Bashar Assad regime. He was just a student at Al-Baath University in Homs, Syria, when the war broke out and he had to leave it all behind.

“I had to start with less than nothing seven times,” said Alfaisal, “with my only possessions being the shirt on my back.” Alfaisal also managed to survive three regime sieges over the course of two years, spending most of his time hiding to avoid being killed. With the area blockaded and all entries and exits controlled by regime soldiers, Alfaisal said they had to eat anything they could find that was remotely edible just to stay alive.

His family still remains in Syria, and life is pretty hard for them, he says.

He currently has a startup that offers services to Syrians in Turkey as well as international clientele for web-based solutions. Although tiring, he said the hackathon was great fun and really helped broaden his horizons.

Al-Alwan was also forced to flee his hometown of Deir El-Zour in Syria over the regime's continued attacks and increasing pressure.

"I lost my house and my job in Syria; I came to Turkey four years ago because of the war conditions and the bad situation there," he said.

He said Turkey was the best and the only option he had in terms of a safe escape.

"The living conditions and the relationship between us (Syrians) and our Turkish brothers (goes way back)," he said.

"Turkey is a great country, Turkish people are very nice and we have a lot in common," he added.

After all the hardship he suffered in Syria, al-Alwan says he is "really happy to be in Turkey."

"I now have many Turkish friends and neighbors that I’m very proud to have known."

Despite being a digital services company in Gaziantep and having worked in digital marketing and digital security for about 10 years, Al-Alwan said the İzmir Hackathon was his first such experience but he was glad to have been a part of it.

Although less violent, Khankan’s story is similar, but he had others to think about, too – his wife and two children.

Just 32 days after getting married, he had to leave the country over the regime’s arbitrary arrests and efforts to quell dissenting voices. Three months after seeking refuge in Turkey, he brought his family to Gaziantep in the southeast to start over. His parents still live in Syria, though, where the situation grows direr every day.

“Yes, they may not have been affected as much as me because they do not leave their house that much, but it is pretty bad there,” he says.

Whether it is frequent security checks, limited resources and queuing for days for the most basic of necessities, poverty and political pressure, “life is just really hard there,” he says.

“I try to convince them to come to Turkey, but he (his father) just wants his own house, his own garden,” he says, because for them, despite all the hardships, it is their homeland and the place where they grew up.

“But when you are young and have a family and kids to bring up, you need to think about the future,” Alfaisal says, adding that it was one of the reasons why he chose Turkey.

The culture here is also very similar, and people were very welcoming, he says.

“I have my wife, I have my kids, I have a roof over my head and can buy food; we’re safe. What else could I ask for?”

However, life in Turkey hasn’t always been rainbows and roses. Racism has also started to surface in some areas, and the language barrier doesn’t help, he says.

“I tried to learn Turkish from Turkish series and TV, but it can be hard because there are so many accents, especially in the southeast,” he says.

He, like the others, has his own web development and software engineering company and wants it to grow. The hackathon in İzmir helped him expand his network of contacts, exchange ideas with fellow engineers and entrepreneurs and get advice from trusted mentors.