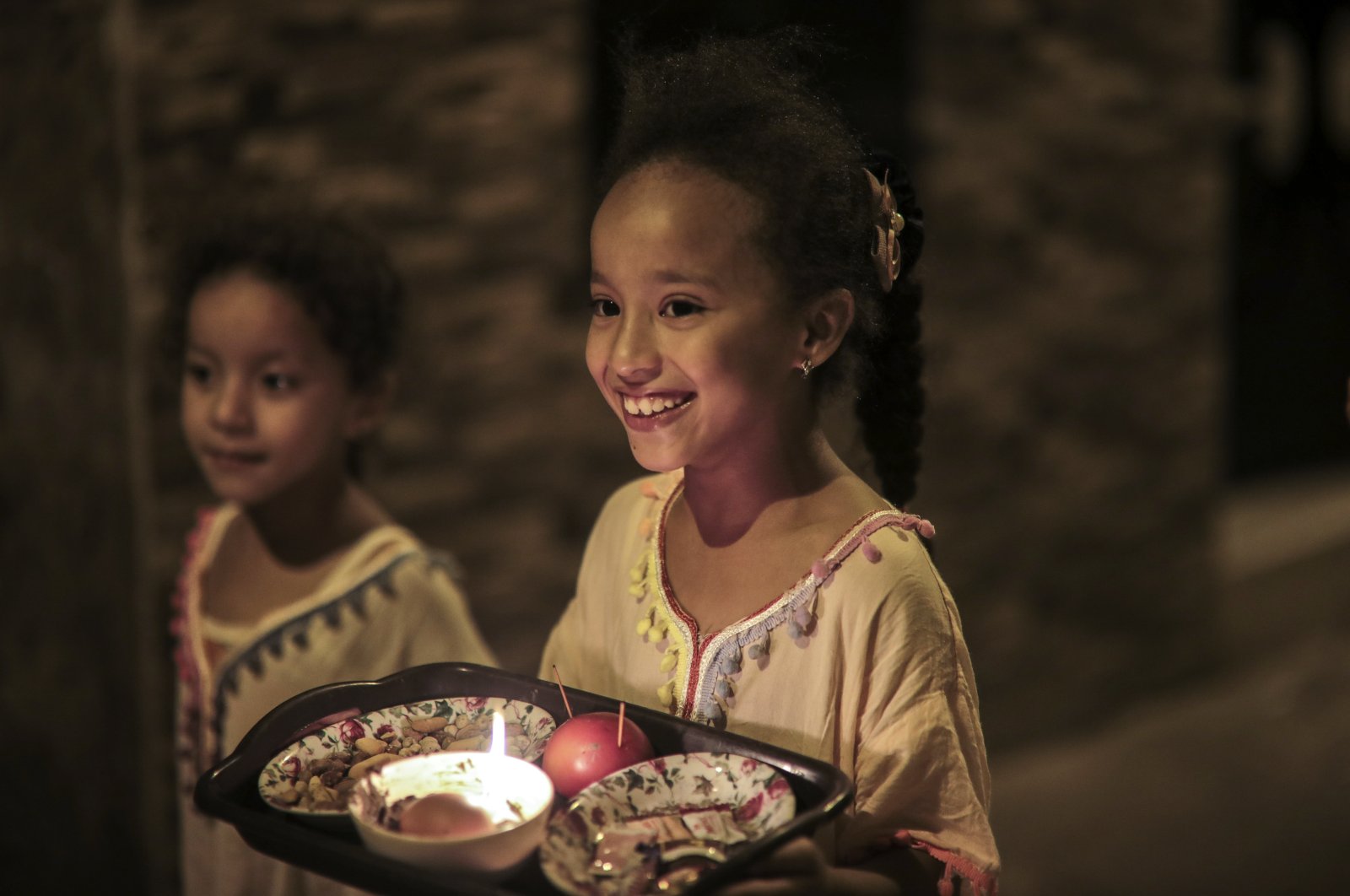 Girls carry a tray outside their home to collect treats and dry fruits, in celebration of Ashura, in Sale, near Rabat, Morocco, Sept. 9, 2019. (AP Photo)
by DAILY SABAH Aug 27, 2020 10:55 am
Edited By Yasemin Nicola Sakay

Symbolizing joy, relief and deep sorrow, Ashura is celebrated on the 10th day of Muharram, the first month of the Islamic Lunar Hijri calendar, and commemorated by more than one major religion

Muslims celebrate Ashura as the revered day when the Prophet Noah’s Ark landed on Mount Cudi, located in the southeast of modern-day Turkey. According to Islamic beliefs, Noah asked his family to bring all the remaining food on the ark and prepare a sweet soup/pudding by mixing them all together. Since then, Muslims have been celebrating this day to commemorate Noah's survival from the flood by making ashura (aşure in Turkish) and sharing it with family, neighbors and friends.

But this is not the only occasion this day corroborates with. According to Islamic sources, it is believed that the 10th day of Muharram is also significant because on this day the Prophet Adam's repentance was accepted by God after he was exiled from paradise. Another account regarding the origins of Ashura is rooted in the time of Moses when God spoke directly to the prophet and gave him the Ten Commandments; the sea was divided as the nation of Israel was delivered from captivity and the Pharaoh's army was destroyed.

Another incident marked by Muslims that falls on this day is the death of the Prophet Muhammad’s grandson, Hussein. This traumatic event, also known as the Second Fitna, was caused by a political dispute, where the army of the ruler of Umayyad, Yazid I, put them under pressure to pay allegiance to the caliph of the time. Despite diplomatic efforts, Hussein and his resistance forces were murdered on the 10th of Muharram. This event lead to a separation into two branches in the Muslim faith: Shiites and Sunnis. Shiite Muslims consider the day of Ashura a day of sorrow and observe it as such by reading and listening to sorrowful poetic recitations, dressing as mourners and avoiding celebrations such as weddings and other traditions. Shiites dress in black and wear red headbands with messages commemorating Hussein, as they march in the streets, with some participating in bloody rituals like self-flagellation and shedding blood as true to tradition. Many cities across Turkey also hold commemorative or celebratory events, with mevlid recitals and prayers held in the memory of Karbala martyrs and Hussein the most notable ones since the conquest of Istanbul.

Many more accounts mark this day as significant as it is seen as the day Jonah got out from the belly of the whale, Abraham survived the fire of King Nimrod, Idris ascended to the sky, Jacob finally could see when he reunited with his son Joseph, Joseph came out from the pit, Job recovered from illness, and Jesus was born and ascended to heaven.

Another hadith narrated by Ibn Abbas, one of the early Quranic scholars says: "The prophet came to Medina and saw the Jews fasting on the Day of Ashura. He asked them about it. They replied, 'This is a good day, the day on which God rescued Bani Israel from their enemy. So, Moses fasted on this day.' The prophet said, 'We have more claim over Moses than you.' So, the prophet fasted on that day and ordered (the Muslims) to fast (on that day)." For the Jewish people, the 10th of Muharram marks the day of Yom Kippur, the Day of Atonement. This day falls on the 10th day of the Jewish month Tisri and is considered one of the holiest days in Judaism.

Marking the day with the remembrance of Hussein, one of Shia Islam's most important figures, Sunni Muslims also observe it by serving ashura, a dessert commonly known as Noah's pudding, which is made to remember Prophet Noah's surviving of the Flood.

In Turkey, nonprofits and municipalities distribute bowls of the dessert to thousands of people on the occasion. The sweet pudding is traditionally made at home and shared with neighbors as is custom to prepare it in large cauldrons to distribute to the poor. It is made of a mixture of coarsely ground wheat, chickpeas, beans, rice, apricots, grapes, berries and other fruits, though everyone has a particular recipe they like to stick to.