Rereading Old Istanbul: A perusal of Balat Sahaf in the city's most colorful neighborhood 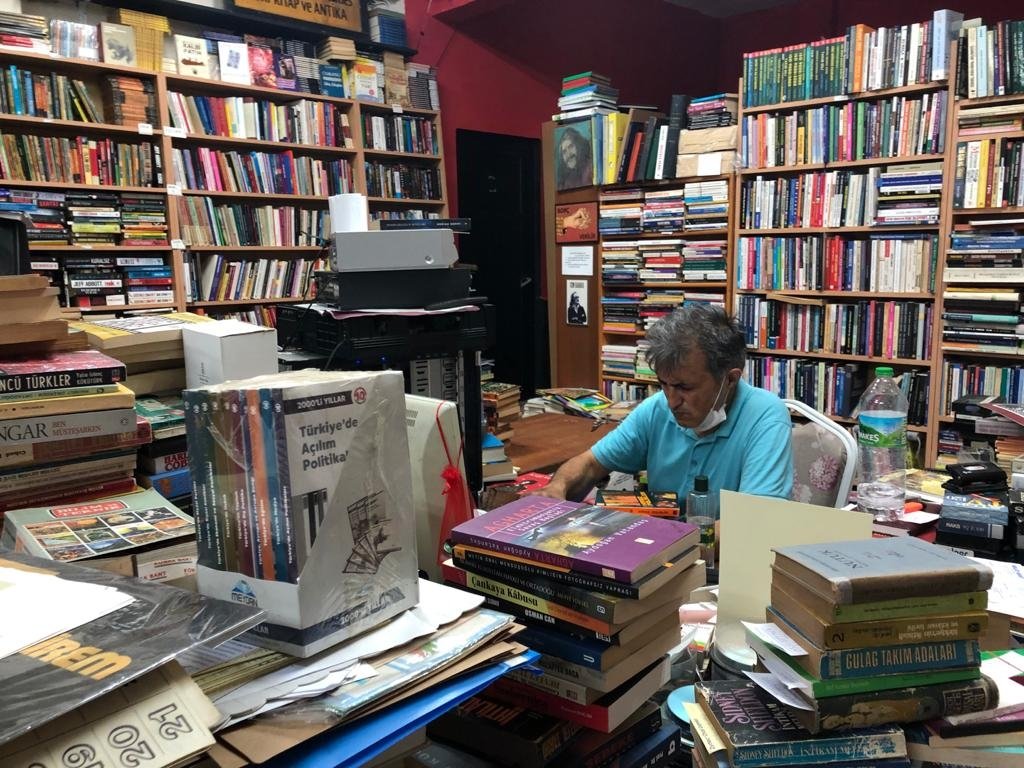 Sahaf owner İzzet Yılmaz sits in front of his desktop computer, besieged on all sides by overstocked shelves. (Photo by Matt Hanson)
by Matt Hanson Nov 04, 2020 10:25 am
Edited By Yasemin Nicola Sakay

One characteristic neighborhood that has become synonymous with Istanbul’s distinctive saga of gentrification is Balat, a colorful historical quarter on the Golden Horn in the ancient walled district of Fatih

The walls of the used bookstore, Balat Sahaf, are very talkative. They speak in poetry, prose and in the music, theater and film of bygone days when Istanbul’s culture had a homegrown vitality that is all but lost, preserved by such capsules of memory as are confined to the dusty pages and grainy recordings found, often by chance, in the city’s secondhand literary knickknack shops, known, adoringly, by the local Turkish appellation of sahaf.

As a resident of Istanbul, I have tended to favor Balat as quaint, lovable, akin to other sweet locales tucked away inside the bustling megalopolis, such as the serene Kuzguncuk, or the lively Arnavutköy. Yet, Balat is unparalleled for its evocation of history. Istanbul’s oldest surviving synagogue, Ahrida, and the Ecumenical Patriarchate of Constantinople in neighboring Fener, are irresistible lures to appreciate the world’s shared heritage of Byzantine civilization.

From the busy port of Eminönü, floating fish restaurants compete for customers among bread stalls, coffee stands and newspaper kiosks. Along the inlet mythicized, in English, by its antique, Grecian title of Golden Horn, the ruins of one of humanity’s most impressive examples of archaic urbanization lead to clusters of waterfront cafes and restaurants, empty lot gardens, antique auctioneer shops, winding cobblestoned streets and rentable varicolored apartments.

Balat emerges beside its citified sibling, Fener, a contiguous, revitalized district with a name that recalls the inlet’s storied medieval lighthouse. Traces of Greek society, such as the occasional "meyhane" tavern, remain, as with a long-standing Roma community, and more obscure evidence of boulevards that, until the early 20th century, were the toast of Jewish life in old, Ottoman Istanbul.

The plain, unremarkable Balat Sahaf is housed behind an entirely transparent, glass storefront on one of the two main pedestrian roads that make up Balat’s core. Before its alleys lead uphill past the iconic architectural gem of Phanar Greek Orthodox College, Balat Sahaf is a few steps from the Bulgarian “Iron” Church, legendary because in the 1890s, Viennese architects shipped parts of its metal structure over the Danube, Black Sea and past the Sublime Porte.

Opposite the sleepy exterior of Balat Sahaf is a vestige of the neighborhood’s past, where the Jewish doctor Davit Eskinazi continues to see patients out of his walkup tenement examination office, as one of the last of the proudly diverse community of Sephardic, Romaniote and Karaite religionists. And by its transparent entryway, it is common to see a nondescript middle-aged man in a plaid, collared shirt dozing off as stray dogs pass.

Beside him, under the soporific hum of a midday snore, there is the rustling overgrowth of a healthy olive tree, its bushy, silvery-green leaves poking out from under the foundation of a half-demolished, traditional stone home still protected by a formidable iron gate. In animated, green typescript, “Balat Sahaf” appears, twice, above the phone number of the frugal business that is wanting for a sleeker sense of design, however, couched in its charming irrelevance.

Once inside, the reticent but friendly shopkeeper Izzet Yılmaz is busy fixing an outmoded cassette player, as springs and reels pop and unravel to his increasing befuddlement. He is surrounded by a staggering amount of premillennial media, those scratchy vinyls and discs, finicky tapes and the like spanning the multicultural range of vintage cultures that exists only in the heaven-sent return of what ghostly imaginations linger among the living.

After fielding some phone calls, Yılmaz sits at a rickety desktop computer, besieged on all sides by overstocked shelves and leaning stacks of books and ephemera. He then catalogs a few newly acquired titles, including an invaluable copy of the Turkish translation of Richard Wright’s seminal African-American memoir, “Black Boy,” initially published in 1945. Yılmaz then quietly offers his guests tea out of a makeshift kitchen set in the bibliophilic chaos.

The organization of books and printed material at Balat Sahaf comes in waves of order, yet adheres to nothing resembling any particular earthly shape. It is an amorphous jungle of spines and leaves, bound and scattered, as multilingual as those who were said to have lived in the shadow of the biblical Tower of Babel. Like the eternal fable of human striving to heaven, or unity, out of its innate diversity, Balat Sahaf evokes a parallel epic in modern publishing.

On voices of silence

Despite the wide array of obsolete names, titles and works, which might otherwise be reduced to the pulp of a paper mill, there are, at Balat Sahaf, intriguing discoveries to be made for the contemporary-minded reader. On the other side of the city, in the shorefront quarter of Tophane in the heart of Beyoğlu, a cafe called Riverrun, in reference to the words of James Joyce, quadruples as a seller of new books, an art gallery and publisher Norgunk, specializing in boutique artist books.

Balat Sahaf happens to carry a twin edition of a Norgunk book of sketches by the painter and sculptor Abidin Dino. They are exquisitely crafted slim volumes. One is dedicated to the sketching of hands, the other of faces. If a curious art-lover of a bookworm cracks open, “Hand,” they may be transported to Dino’s public sculpture by Istanbul’s forested Maçka Park, in which the artist conceived an Escher-like vision of fingers, nails and palms.

Also, in relation to Istanbul’s downtown scene, Balat Sahaf has a rare backlog that encompasses the oeuvre of the Turkish-Jewish poet and painter Habib Gerez, who, even into his twilight years, eighty-something and ageless, continues to host guests at his Galata studio with all of the gusto and charisma one might expect from a 20th-century, European bohemian. Balat Sahaf sells his collected nonfiction, loosely translated, “Those Who Speak to the Wind.”

Of note is the fact that Balat Sahaf also stocks the art magazine, RES, an imprint of Dirimart, one of Istanbul’s proudest sources of interaction with the global art world. But what is most exciting about Balat Sahaf, in my opinion, is its treasury of magazines, particularly dating from the immediate decades following World War II, when Turkey’s midcentury, Cold War-era affairs with cultural globalization made for some perpetually fascinating fusions of the creative industry.

And with an intellectual disposition for oblique means and references by which to approach novel appreciations of Turkish culture, such troves of cerebral insight as that which the Balat Sahaf offers, and truly every sahaf, are indispensable. One book buried in the shop, “Mural Ceramics in Turkey” by Marie de Carcaradec, contextualizes the Turkish modernist Füreya Koral, or "The Arrangement", a minor novel by Elia Kazan published in 1967 might shed light on the author’s Ottoman origins.