Return of the cubicle? What workplaces will look like after coronavirus pandemic 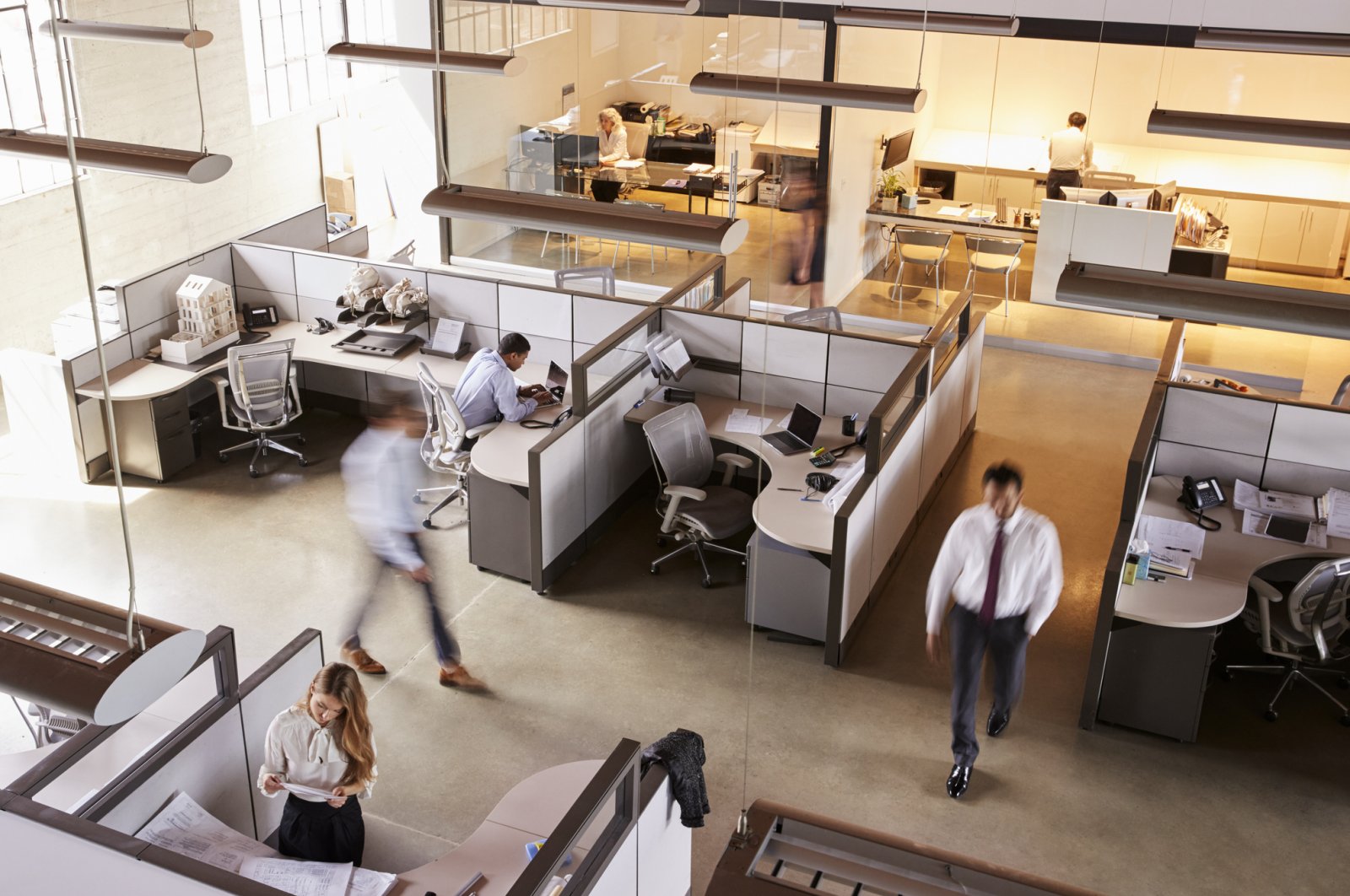 This pandemic could spell the end of the modern open-plan office. (iStock Photo)
by DAILY SABAH WITH AGENCIES May 13, 2020 1:05 pm

The coronavirus pandemic has made working from home more widely accepted than ever before in human history, and although we expect to return to our old ways after this all blows over, we have to come to terms with the reality that office jobs will never be the same

Around the world, some countries are leaving behind their coronavirus peaks, and though deemed very premature and highly risky by virus experts, many are gradually starting to reopen their economies.

When we finally return to our desks, experts say we should be prepared for a "new normal" that will entail fewer people going back to the office and more working from home, for a start.

As health concerns linger and companies weigh up rent savings and productivity benefits, here is a preview of what to expect.

Handshakes are out "indefinitely," said Tom Frieden, the former director of the U.S. Centers for Disease Control and Prevention (CDC). Next, offices will need to start thinking about practical measures.

"Can we have doors that don't have to be opened by people? Should we be taking the temperatures of all people who enter?" he said in a call with reporters.

No-touch hand sanitizer dispensers will become common. Steps may be taken to reduce overcrowding in common spaces, and computers and phones may no longer be shared.

Mask use will be encouraged, and some workplaces may provide them.

Businesses like supermarkets are already restricting the number of people who can enter, placing clear plastic barriers between employees and customers and enforcing physical distancing by placing stickers on the ground as a constant reminder – this could be extended to all shops, cafes and face-to-face engagements.

All out on hygiene

Workplaces will continue to hammer home the message of washing hands regularly and thoroughly.

“The amount of people cleaning and sanitizing an office is going to shoot through the roof,” said Brian Kropp, Gartner’s chief of human resources research.

Extra attention will go to places like conference rooms, which will have to be cleaned between uses, bringing added disruption, he said.

Often-touched surfaces will be cleaned more frequently, but greater attention will need to be placed on keeping bathrooms clean and improving plumbing since there is some evidence that the coronavirus can be spread via feces.

A recent Lancet paper recommended, "do not ignore unexplained foul smells in bathrooms, kitchens, or wash areas," and included tips for improving plumbing, like having functioning U-bends that prevent the outflow of sewage gases.

One step toward mitigating the risk is flushing the toilet with the lid down, since a flush can release up to 80,000 contaminated droplets and leave them suspended in the air for hours if it's not covered, according to a recent Hong Kong study.

But many toilets in modern workspaces lack lids – a trend that may be reversed.

For many, changes will begin with the commute as workers arrive in staggered shifts to avoid rush-hour crowds. Staff might take turns working alternate days in the office so that fewer people are present at a given time.

Hive, a New York City-based workplace software startup, for example, plans to help employees avoid packed rush-hour subway commutes by starting at different hours. In the U.K., the government is considering asking employers to do the same.

At bigger companies, senior executives are rethinking cramming downtown office towers with workers. British bank Barclays is making a “long-term adjustment in how we think about our location strategy,” CEO Jes Staley said. “The notion of putting 7,000 people in a building may be a thing of the past.”

That is already happening in China, where lockdowns started easing in March. Beijing municipal authorities limited the number of people in each office to no more than 50% of usual staffing levels and required office workers to wear face masks and sit at least 1 meter (3.3 feet) apart.

Why drag employees into the office for meetings that could have been just an e-mail? Now that many work processes have gone virtual, companies are holding fewer meetings and talking exclusively online.

"One thing that we found out from this pandemic and sheltering in place at home is that in-person meetings are not always necessary. Virtual meetings should be an ongoing option from here on out," said Brown.

Considering that sanitizing everybody’s desk will be pointless if all will eventually come together in the same room for "all-hands meetings" at the office, companies could do away with in-person meetings altogether.

High tech solutions will play a role and existing industrial sensor technology could easily be adapted to offices, according to Joanna Daly, vice president for corporate health and safety at IBM.

One possible example: “We’d want our phones to buzz if we got closer than 2 meters while we were having a conversation,” she said.

At a minimum, the COVID-19 crisis could be the death knell for some recent polarizing office trends, such as the shared workspaces used by many tech startups to create a more casual and creative environment. Cubicles and partitions are making a return as the virus speeds the move away from open-plan office spaces, architects say.

Design firm Bergmeyer is reinstalling dividers on 85 desks at its Boston office that had been removed over the years. That “will return a greater degree of privacy to the individual desks, in addition to the physical barrier which this health crisis now warrants,” said Vice President Rachel Zsembery.

"Staying at home if you are sick may be encouraged vs. discouraged," said Brandon Brown, a University of California Riverside epidemiologist.

Some private companies in Turkey and the world, as well as the U.S. as a whole (because there is no federally mandatory sick leave), have work cultures that frown upon sick days. As a result, people tend to power through despite illness. That may change.

Telework may become more common for many as a result, especially as people have learned during enforced lockdowns that it is possible.

The pandemic has already extracted a devastating death toll, and the onus for providing counseling may fall to a great extent on employers.

"Don't forget a lot of people are gonna go back to work having lost family members," said Marc Wilkenfeld, a doctor who specializes in occupational medicine at NYU Langone Health.

"I think the bigger companies or even the smaller companies are going to need to address these issues, because you do want a workforce coming back healthy, physically and mentally," he said.

Even after the COVID-19 threat ends, the work-from-home trend will only continue to accelerate, especially as companies prepare for new disease outbreaks or other emergencies, according to consultancy Gartner.

After the pandemic, 41% of employees expect to work remotely at least some of the time, up from 30% before the outbreak, according to 220 human resources executives it surveyed. Workers who do return will likely welcome wearing office attire once again as a signal things are going back to normal, Gartner said.

Not all companies can go fully remote, especially big corporations with thousands of staff. Even so, they’re thinking carefully about who should return to the office and who can and should continue to work from home.

People over the age of 65 or who have underlying conditions like heart disease or diabetes are at higher risk for complications arising from COVID-19 – and their return to offices will come later.

"When people start to go back to work, I think that it's going to be that not everyone goes back at the same time," Wilkenfev said.