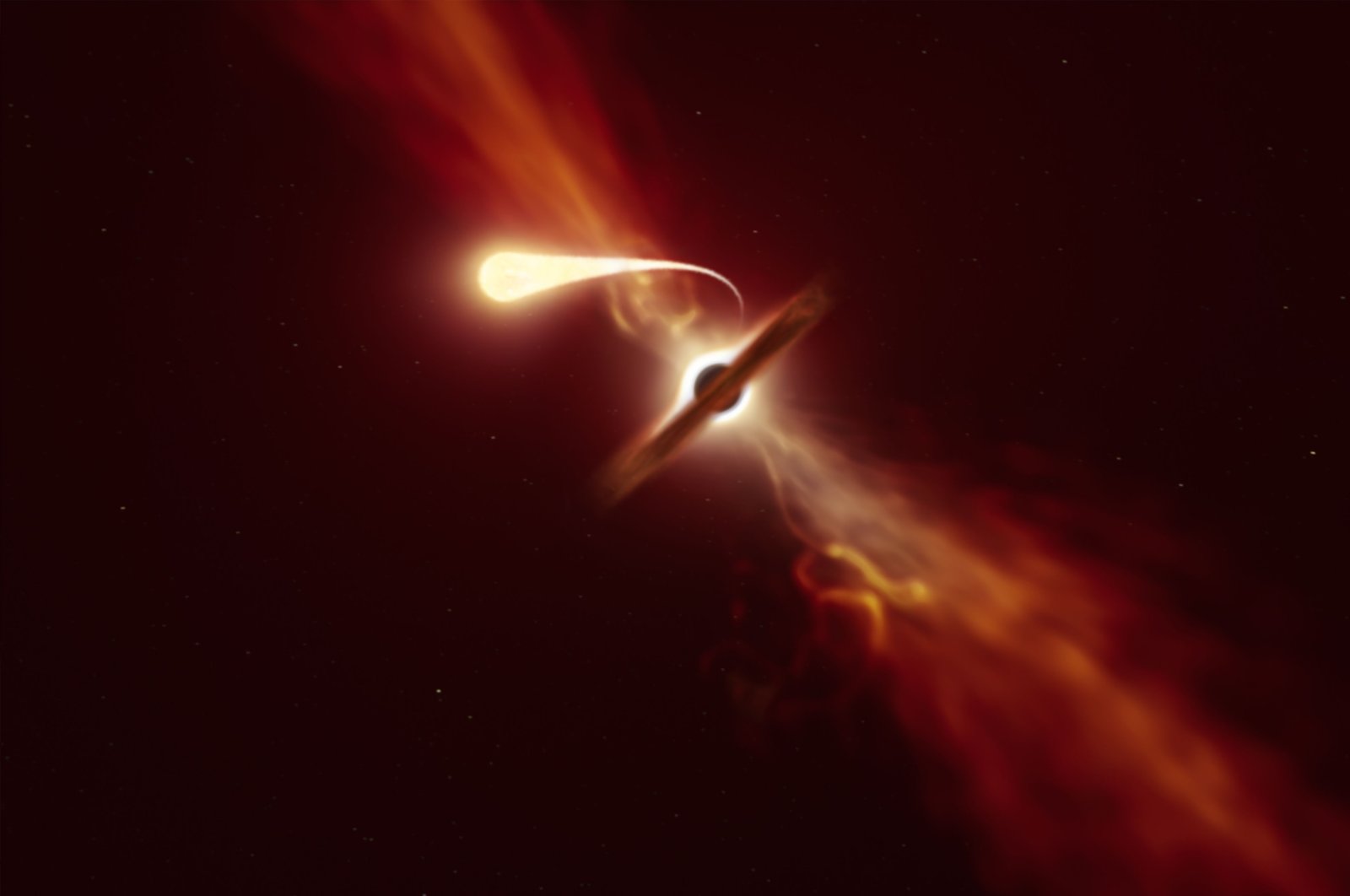 An illustration depicts a star (in the foreground) experiencing "spaghettification" as it is sucked in by a supermassive black hole (in the background) during a "tidal disruption event," released Oct. 12, 2020. (Photo by M. Kornmesser / European Southern Observatory / AFP)
by French Press Agency - AFP Oct 12, 2020 11:05 pm
RECOMMENDED

Astronomers have captured the moment a supermassive black hole shredded a star the size of our sun, releasing images Monday showing the devastating process in unprecedented detail.

Using telescopes from the European Southern Observatory (ESO), they were able to monitor light flaring from the process – known as a tidal disruption event – from a black hole just over 215 million light-years from Earth.

They observed the star being physically torn apart as it was sucked into the black hole's giant maw.

"The idea of a black hole 'sucking in' a nearby star sounds like science fiction," said Matt Nicholl, a lecturer and Royal Astronomical Society research fellow at the University of Birmingham, lead author of Monday's study.

"But that's exactly what happens in a tidal disruption event," he said.

When a star strays too close to a supermassive black hole, it is subjected to the phenomenal strength of the black hole's gravity.

The star can be physically torn apart and its matter pulled into long strings, a process known as "spaghettification."

"When these forces exceed the star's cohesive force, the star loses pieces that rush into the black hole," Stephane Basa, a researcher from the Marseille Astrophysics Laboratory, told Agence France-Presse (AFP).

"This exceptional influx of matter produces intense electromagnetic emissions, which last for several months while the debris is digested," he said.

Basa said that around half of the star remained after the tidal disruption event.

"'Only' half of its mass has disappeared," he said. "That's already titanic."

While other tidal disruption events have previously been observed, the powerful burst of light they emit are often obscured by a curtain of dust and debris.

Because they discovered the event just a short time after the star was ripped apart, the team was able to pinpoint how the obscuring debris forms.

Using high powered telescopes, they observed the event as the light flare grew in luminosity then gradually faded – a process of some six months.

Nicholl said that the observations suggested the star involved had roughly the mass as our own sun, but that the black hole was "a monster ... which is over a million times more massive."

The team behind the study, published in the journal Monthly Notices of the Royal Astronomical Society, said they hoped it would help scientists to better understand how matter behaves in the extreme gravity environments surrounding supermassive black holes.

Last week a trio of scientists, Roger Penrose of Britain, Reinhard Genzel of Germany and Andrea Ghez of the U.S., were awarded the Nobel Physics Prize for their research into black holes, dubbed by the Nobel committee "one of the most exotic phenomena in the universe."