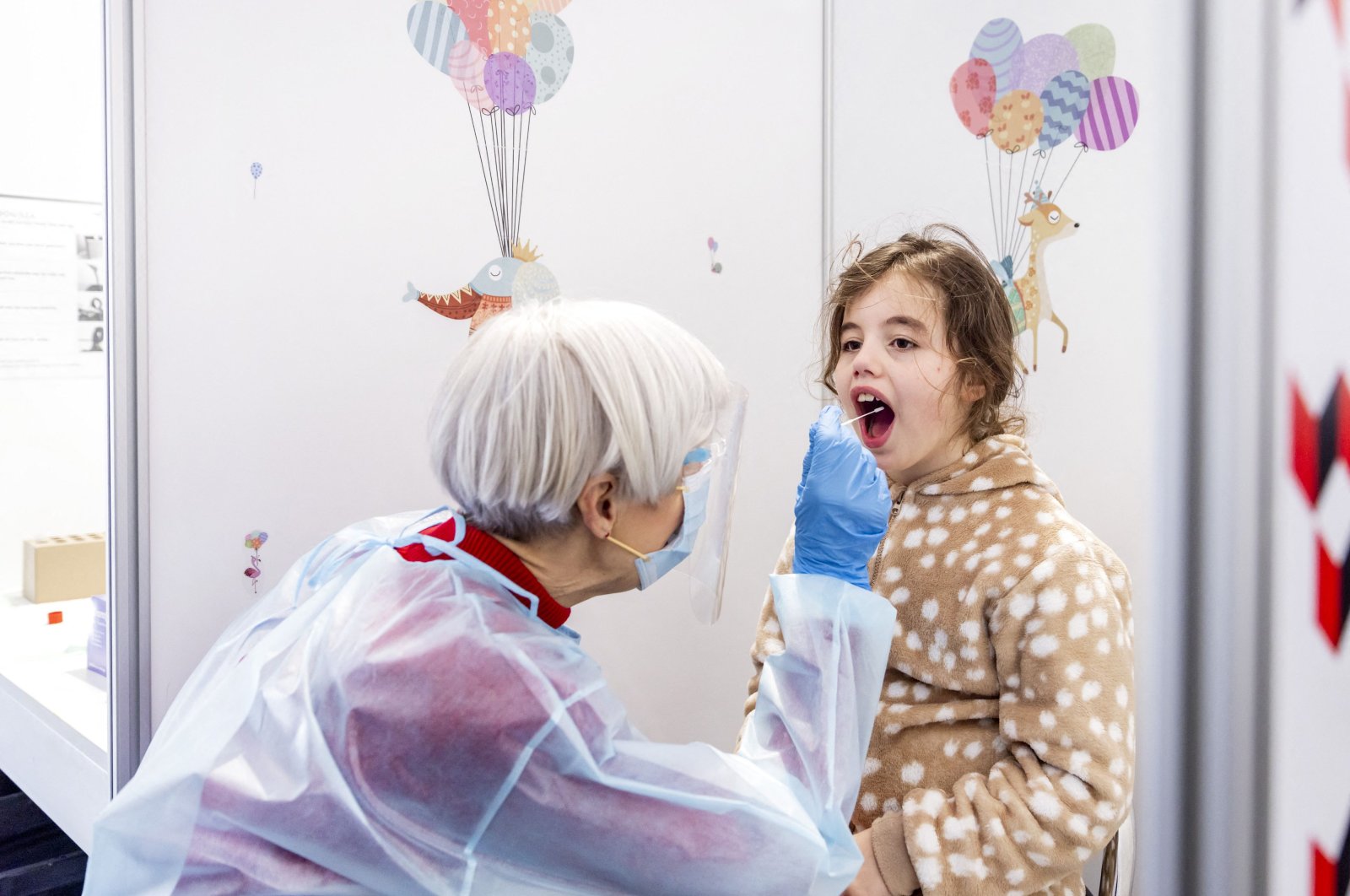 A health worker collects a throat swab sample from a child to test for COVID-19 at a special children's testing center in Amsterdam, the Netherlands, March 26, 2021. (AFP Photo)
by Daily Sabah with DHA Mar 30, 2021 4:06 pm
RECOMMENDED

As more countries enter a new wave of COVID-19 surges in recent times, scientists are starting to observe more and more child patients suffering from the virus as opposed to previously low rates of child infections in earlier periods and it is down to different variants according to an Istanbul University professor.

Ayper Somer, a specialist in pediatric infectious diseases and clinical immunology at Istanbul University's Medical Department, stated that the there was an observed rise in child COVID-19 patients particularly due to the British variant of the virus.

Somer said that the British variant, known as B.1.1.7, was spreading to many kids younger than nine at an alarming rate, causing more cases of multisystem inflammatory syndrome (MIS-C) in children.

MIS-C is a condition seen in children that causes different body parts, including the heart, lungs and eyes to become inflamed. Its symptoms include fever, abdominal pain, vomiting and feeling of extra tiredness among others. It is related to the coronavirus but the science community is unsure on its causes.

Somer said that children are now experiencing more severe COVID-19 and noted that this could lead to an increase in heart rhythm related diseases and conditions caused by MIS-C which is observed in children in the post-COVID-19 period.

Somer emphasized that the age demographic was different that what it used to be months ago. “We used have cases of 10, 12, 13-year-olds; now half of our patients are younger than nine,” she told Demirören News Agency (DHA). “We even have a 6-month-old baby experiencing the illness at a high severity.”

Somer explained that the virus, and MIS-C, affected children in similar ways to how it impacted adults. It causes cardiac conditions like myocarditis, which is the inflammation of myocardium, the heart muscle, said Somer.

She noted that they received many patients with complaints of tachycardia which required close observation against risk of myocarditis and predicted that these cases could rise as COVID-19 continues to spread.

Somer pointed out that data collected from five different countries confirmed that children aged 0 to 9 now need to be considered a high-risk group. “The data shows that the 0-9 age group is increasingly getting infected and are starting to suffer (from the virus) more severely,” she said and added that data from Sweden, the U.K. and Italy supported this fact.

One of the more revealing findings was due to the data from France which showed the contrast between the British variant's infection rates in adults and children. “Of all the COVID-19 cases (in France), 58% are infected with the British variant. But in the 0-9 age group, the variant's spread is at 68%,” she said. “That is a very high rate.”

Somer noted that there wasn't a definitive explanation as to why children younger than nine were affected more from COVID-19, and said that it could be explained by their weaker immune system. “It could also be that they fail to keep social distancing or in wearing masks, because children in this age group are far more social beings.”