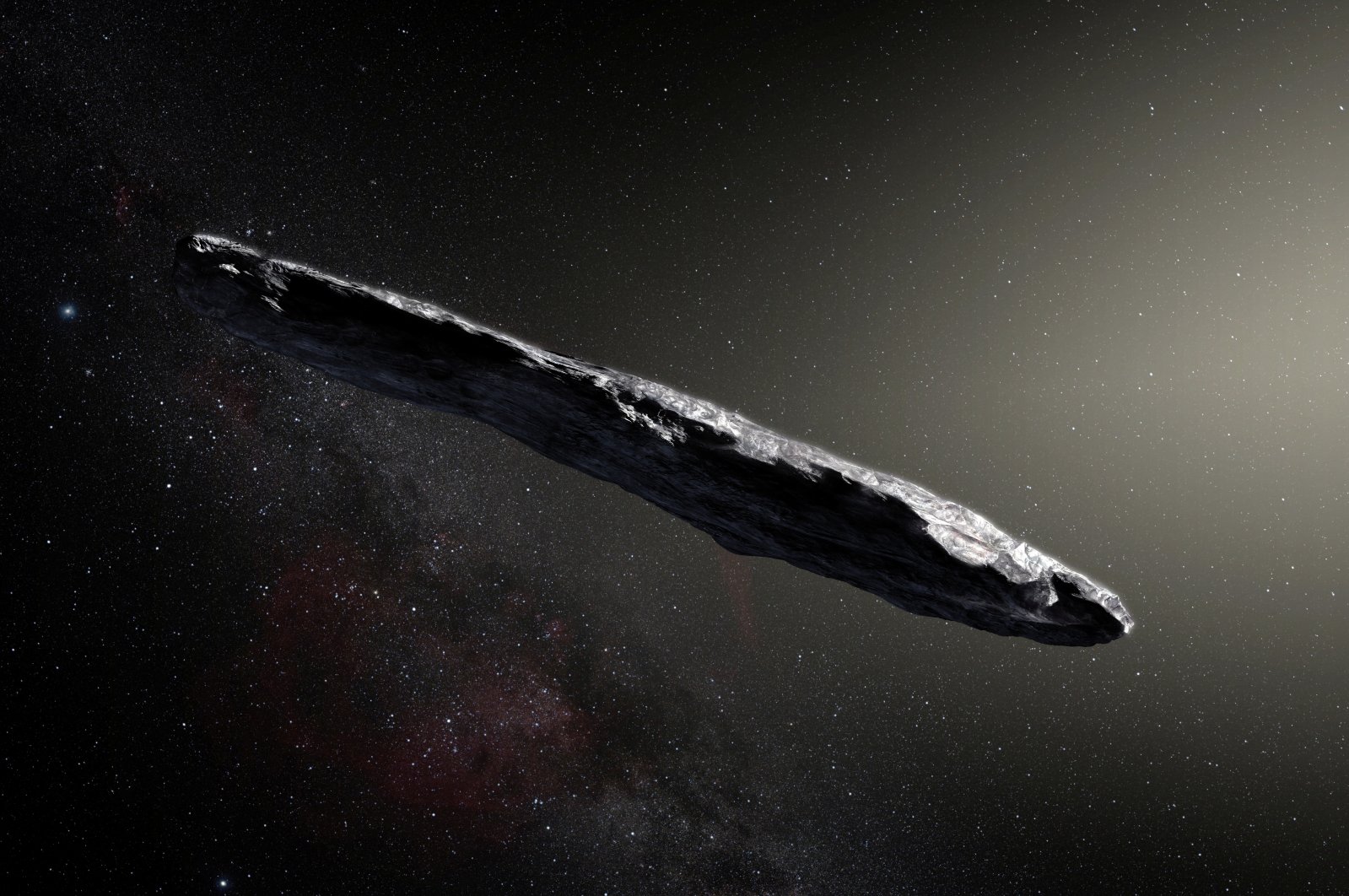 This artist's impression shows the first-known interstellar object to visit the solar system, 'Oumuamua, which was discovered in 2017. (Reuters Photo)
by REUTERS
Apr 14, 2020 4:00 pm

A reddish-colored cigar-shaped interstellar object called 'Oumuamua that is tumbling through our solar system may be wreckage from a planet ripped apart when it roamed too close to the faraway star it once orbited, according to researchers.

Scientists have been puzzled by the origin and nature of 'Oumuamua since its discovery in 2017, with some even proposing it may be an alien spacecraft. Astronomers Yun Zhang  and Doug Lin, in research published this week, said computer simulations indicated it was a remnant of a planet or planetary building block annihilated by a star's "tidal forces."

'Oumuamua, the first object from another star system found passing through our solar system, is about a quarter-mile (400 meters) long. Its elongated shape, curious motion and dry appearance – for instance, lacking a tail of dust and gases – indicated it is not an ordinary comet or asteroid.

When a smaller body passes near a much bigger one, tidal forces exerted by the larger body can shred the smaller one. This is what happened when a comet called Shoemaker-Levy 9 journeyed too close to the planet Jupiter in 1992.

"Most planetary bodies consist of numerous pieces of rock that have coalesced under the influence of gravity. You could imagine them as sandcastles floating in space. Their structure can be disrupted when the force acting on the individual 'sand particle' is larger than their mutual gravity," said Zhang, a researcher at Observatoire de la Cote d'Azur in France.

The planet's near and far parts would be separated into pieces, forming an elongated band of wreckage, with some fragments then fusing together to form objects shaped like 'Oumuamua, added Lin, an astrophysicist at the University of California, Santa Cruz.

The star probably was one-tenth to eight-tenths of the mass of our sun or potentially an exotic type of relatively cool and dense star called a white dwarf, Lin said.

The study suggests the existence of many objects formed this way.

"We show the possibility of panspermia carried by these objects," Zhang said, referring to the hypothesized spread of microorganisms or chemical precursors of life on objects hurtling through space.

'Oumuamua, meaning "messenger from afar" in the native Hawaiian language, is traveling out of the solar system and will reach the orbital distance of Uranus in August.