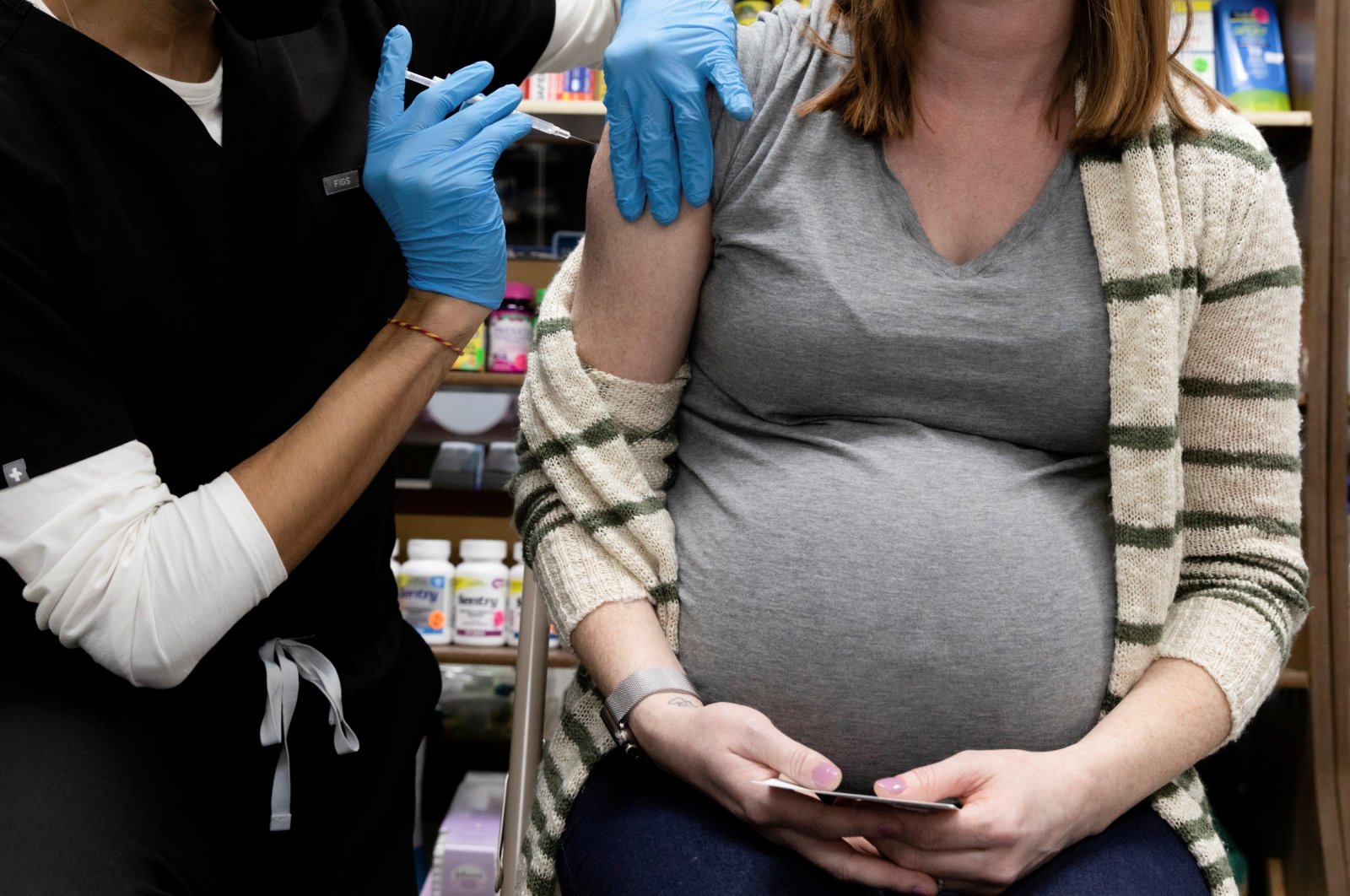 A pregnant woman receives a vaccine for the coronavirus disease at Skippack Pharmacy in Schwenksville, Pennsylvania, U.S., Feb. 11, 2021. (Reuters Photo)
by Reuters Sep 26, 2021 11:09 am
RECOMMENDED

In this week's roundup, the latest scientific research on the coronavirus and efforts to find treatments and vaccines suggest that vaccinated pregnant women pass their antibodies to their babies, a new "antibody map" helps researchers in neutralizing coronavirus even after it mutates and J&J's vaccine proves to be 79% effective at preventing confirmed coronavirus infections.

Pregnant women who get an mRNA vaccine against COVID-19 pass high levels of protective antibodies on to their babies, new research shows. Doctors analyzed umbilical cord blood from 36 newborns whose mothers had received at least one dose of an mRNA vaccine from Pfizer/BioNTech or Moderna.

All 36 babies had high levels of antibodies that target the spike protein on the surface of the virus – and all of the antibodies could be traced to the mothers' vaccinations.

The findings, reported on Wednesday in the American Journal of Obstetrics and Gynecology – Maternal Fetal Medicine, indicate that "the antibodies that the mother is building to the vaccine are crossing the placenta and that's likely to confer benefits for the infant after it's born," said coauthor Dr. Ashley Roman of NYU Langone Health in New York City.

It is not clear whether the timing of vaccination during pregnancy is related to antibody levels in the baby. And, "we don't know how long those antibodies stick around in the baby," Roman said.

"But the presence of these antibodies in the cord blood, which is the fetus' blood, indicates that the baby also has potential to derive benefit from maternal vaccination."

Map of antibody sites on spikes

A new COVID-19 "antibody map" is helping researchers identify antibodies that will be able to neutralize the coronavirus even after it mutates, according to a report published on Thursday in Science.

Using hundreds of antibodies collected from COVID-19 survivors around the world, a global research team mapped out exactly where each antibody attaches to the spike protein on the virus surface, which it uses to break into cells and infect them.

The researchers looked for – and found – antibodies that target sites on the spike that are so important for the viral life cycle that the virus probably could not function without them. Those sites are likely to remain targets for vaccines or treatments even when the virus mutates.

"If you are making an antibody cocktail, you'd want at least one of those antibodies in there because they are probably going to maintain their efficacy against most variants," said coauthor Kathryn Hastie of the La Jolla Institute for Immunology in California, in a news release.

Her team, known as the Coronavirus Immunotherapeutic Consortium, has made the map and a color-coded library of antibodies available in public databases so other scientists can access the data.

A U.S. study comparing nearly 400,000 people who got the one-shot COVID-19 vaccine from Johnson & Johnson with 1.52 million people of similar ages, genders and health issues who were unvaccinated showed it was 79% effective at preventing confirmed coronavirus infections and 81% effective at preventing COVID-19 hospitalizations, J&J said in a report posted on medRxiv ahead of peer review.

There was no evidence of reduced effectiveness over the study's duration from March to late July – a period that included the rise of the highly contagious delta variant, the company said.

Preliminary data from a separate study suggest a second booster dose given about two months after the first shot increased the vaccine's efficacy to 94% in the United States against moderate-to-severe forms of COVID-19.

The company announced those latest findings on Tuesday, when half the people in the study had received the second shot at least 36 days prior. Side effects of the second dose were comparable to those seen in studies of the first shot.

The data will be submitted for publication in the coming months, J&J said.