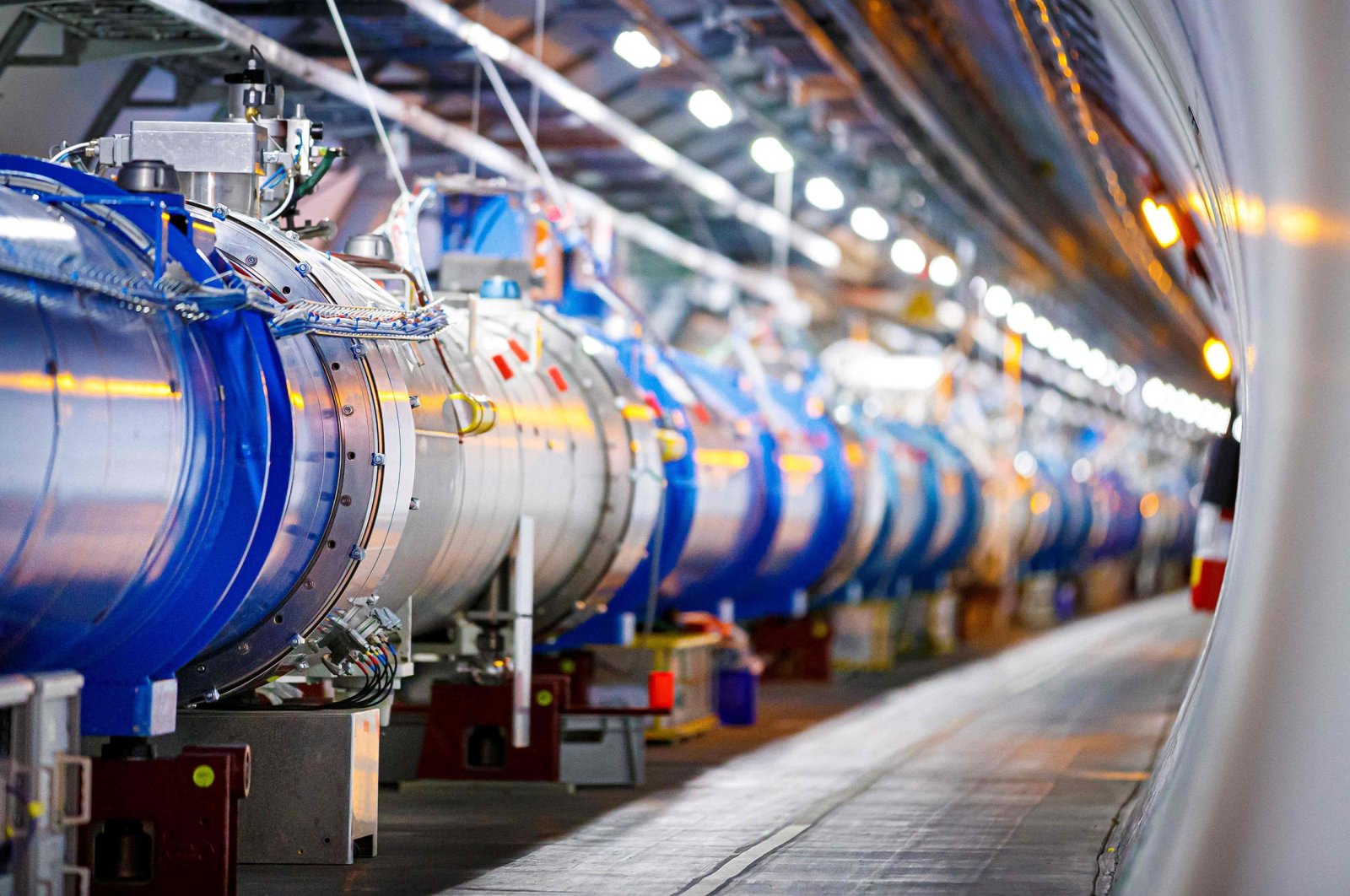 Some of the 1232 dipole magnets that bend the path of accelerated protons in the Large Hadron Collider at CERN, during maintenance works in Cessy, France, near Geneva, Feb. 6, 2020. (AFP Photo)
by Agence France-Presse - AFP Jul 04, 2022 4:31 pm
RECOMMENDED

It has been 10 years since the Higgs boson or the Higgs particle was discovered thanks to the Large Hadron Collider, and after a decade the enormous scientific marvel is gearing up to smash protons together once again, this time at unprecedented energy levels in its quest to reveal more secrets about how the universe works.

The world's largest and most powerful particle collider started back up in April after a three-year break for upgrades in preparation for its third run.

From Tuesday it will run around the clock for nearly four years at a record energy of 13.6 trillion electronvolts, the European Organization for Nuclear Research (CERN) announced at a press briefing last week.

It will send two beams of protons – particles in the nucleus of an atom – in opposite directions at nearly the speed of light around a 27-kilometer (17-mile) ring buried 100 meters (328 feet) under the Swiss-French border.

The resulting collisions will be recorded and analyzed by thousands of scientists as part of a raft of experiments, including ATLAS, CMS, ALICE and LHCb, which will use the enhanced power to probe dark matter, dark energy and other fundamental mysteries.

"We aim to be delivering 1.6 billion proton-proton collisions per second" for the ATLAS and CMS experiments, CERN's head of accelerators and technology Mike Lamont said.

This time around the proton beams will be narrowed to less than 10 microns – a human hair is around 70 microns thick – to increase the collision rate, he added.

The new energy rate will allow them to investigate further the Higgs boson, which the Large Hadron Collider first observed on July 4, 2012.

The discovery revolutionized physics partly because the boson fit within the Standard Model – the mainstream theory of all the fundamental particles that make up matter and the forces that govern them.

However, several recent findings have raised questions about the Standard Model, and the newly upgraded collider will look at the Higgs boson in more depth.

"The Higgs boson is related to some of the most profound open questions in fundamental physics today," said CERN director-general Fabiola Gianotti, who first announced the boson's discovery a decade ago.

Compared to the collider's first run that discovered the boson, there will be 20 times more collisions this time around.

"This is a significant increase, paving the way for discoveries," Lamont said.

Joachim Mnich, CERN's head of research and computing, said there was still much more to learn about the boson.

"Is the Higgs boson really a fundamental particle or is it a composite?" he asked.

"Is it the only Higgs-like particle that exists – or are there others?"

Past experiments have determined the mass of the Higgs boson, as well as more than 60 composite particles predicted by the Standard Model, such as the tetraquark.

But Gian Giudice, head of CERN's theoretical physics department, said observing particles is only part of the job.

Among the Large Hadron Collider's nine experiments is ALICE, which probes the matter that existed in the first 10 microseconds after the Big Bang, and LHCf, which uses the collisions to simulate cosmic rays.

After this run, the collider will come back in 2029 as the High-Luminosity LHC, increasing the number of detectable events by a factor of 10.

Beyond that, the scientists are planning a Future Circular Collider – a 100-kilometer ring that aims to reach energies of a whopping 100 trillion electronvolts.

But for now, physicists are keenly awaiting results from the Large Hadron Collider's third run.