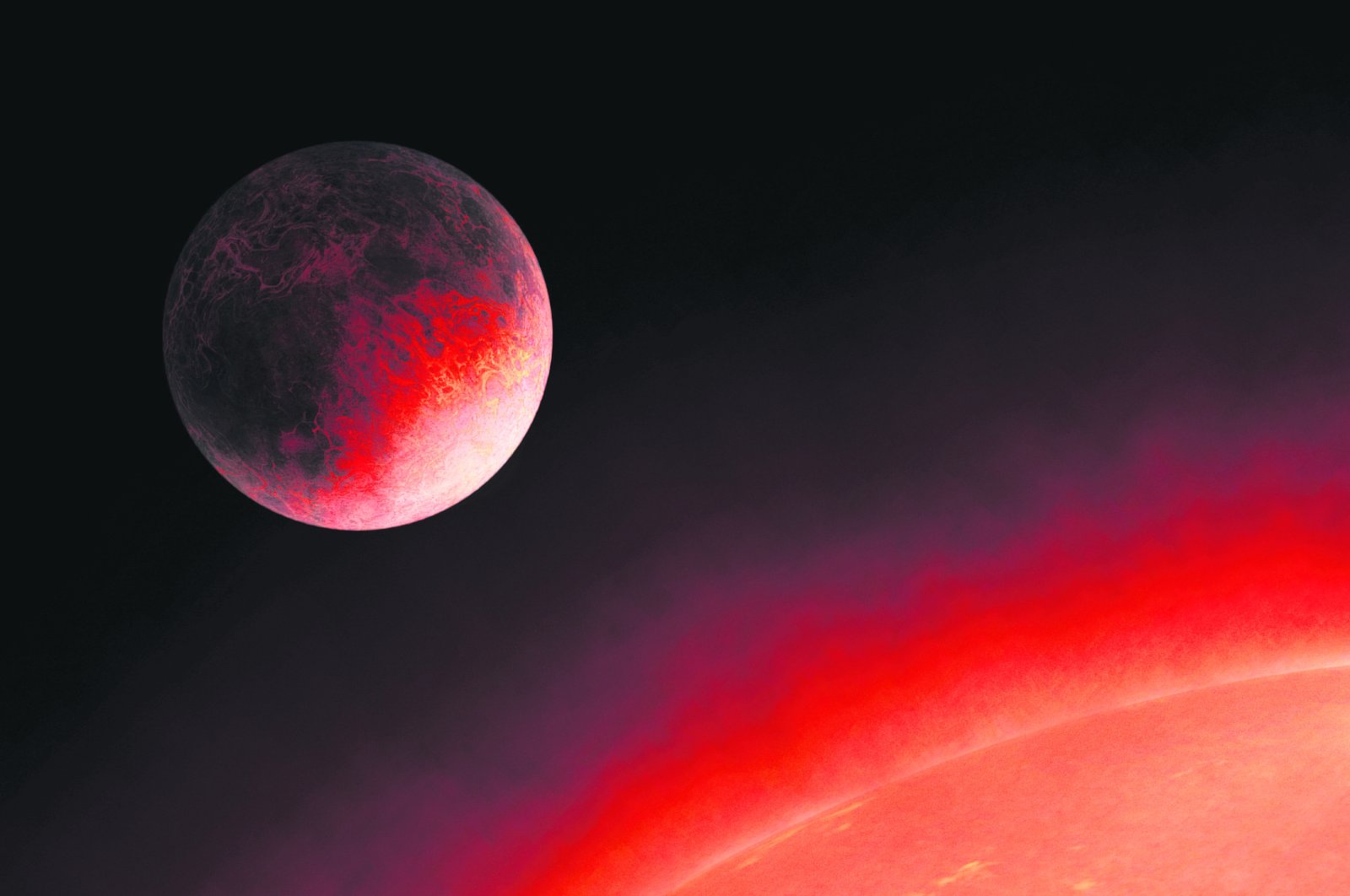 An illustration shows a newly discovered exoplanet called GJ 367b, that is located roughly 31 light years from Earth. (SPP 1992 via Reuters)
by Reuters Dec 06, 2021 2:40 pm
RECOMMENDED

Scientists have spotted an extrasolar planet with half the mass of Earth – one of the smallest planets ever discovered outside the solar system – with a day that lasts less than eight hours as it zooms around its home star, boasting a density of pure iron and scorching-hot temperatures.

The researchers said on Thursday they managed to detect the planet – only a bit larger than Mars – located a relatively close 31 light years from Earth, and discern some of its important traits, illustrating the improvements in recent years in the ability to characterize smaller-sized planets beyond our solar system.

Scientists are eager to find exoplanets, as these alien worlds are known, that might harbor life. The newly discovered one, called GJ 367b, certainly could not, possessing ferocious surface temperatures and perhaps a molten lava surface on the side facing its star, they said. But other small exoplanets found and studied using the same methods might emerge as good candidates for nurturing extraterrestrial life.

A quarter century after the first exoplanet discoveries, scientists have turned toward characterizing them more precisely to gain a deeper understanding of their variety, from large gas giants akin to Jupiter to smaller rocky Earth-like planets where life might thrive.

“Gas giants such as Jupiter, as we know it, are not habitable because they have more extreme temperatures, weather, pressures and a lack of essential building blocks to support life,” said astronomer Kristine Lam of the Institute of Planetary Research at the German Aerospace Center (DLR), lead author of the study published in the journal Science.

“Unlike gas giants, small terrestrial worlds like Earth are more temperate and consist of important ingredients, such as liquid water and oxygen, to harbor life forms. Although not all terrestrial exoplanets are habitable, searching for smaller worlds and identifying the type of planets they are can help us understand how planets were formed, what makes a planet habitable and if our solar system is unique,” Lam added.

The researchers calculated that 86% of GJ 367b is composed of iron, with an interior structure resembling Mercury, the closest planet to our sun. They are wondering whether the planet lost an outer mantle that once encased its core.

“Perhaps like Mercury, GJ 367b could have experienced an episode of giant impact which stripped away the mantle, leaving behind a large iron core. Or maybe the exoplanet is a remnant of a Neptune or super-Earth sized gaseous planet, where the atmosphere of the planet has completely blown away as the planet is blasted by a large amount of radiation from the star,” Lam said.

It orbits very close to a red dwarf star that is smaller, cooler and less luminous than our sun – more than 99% closer than Earth's distance to the sun, according to astronomer and study co-author Szilard Csizmadia, also of the DLR's Institute of Planetary Research.

GJ 367b orbits its star once every 7.7 hours, placing it in a category of “ultra-short period” exoplanets that travel around their home stars in less than 24 hours. One side of GJ 367b probably faces its star at all times, with surface temperatures up to about 1,500 degrees Celsius (2,700 degrees Fahrenheit).

“This temperature is high enough to evaporate any atmosphere that GJ 367b might have had in the past, as well as melting any silicate rocks and metallic iron on the planet,” Lam said.