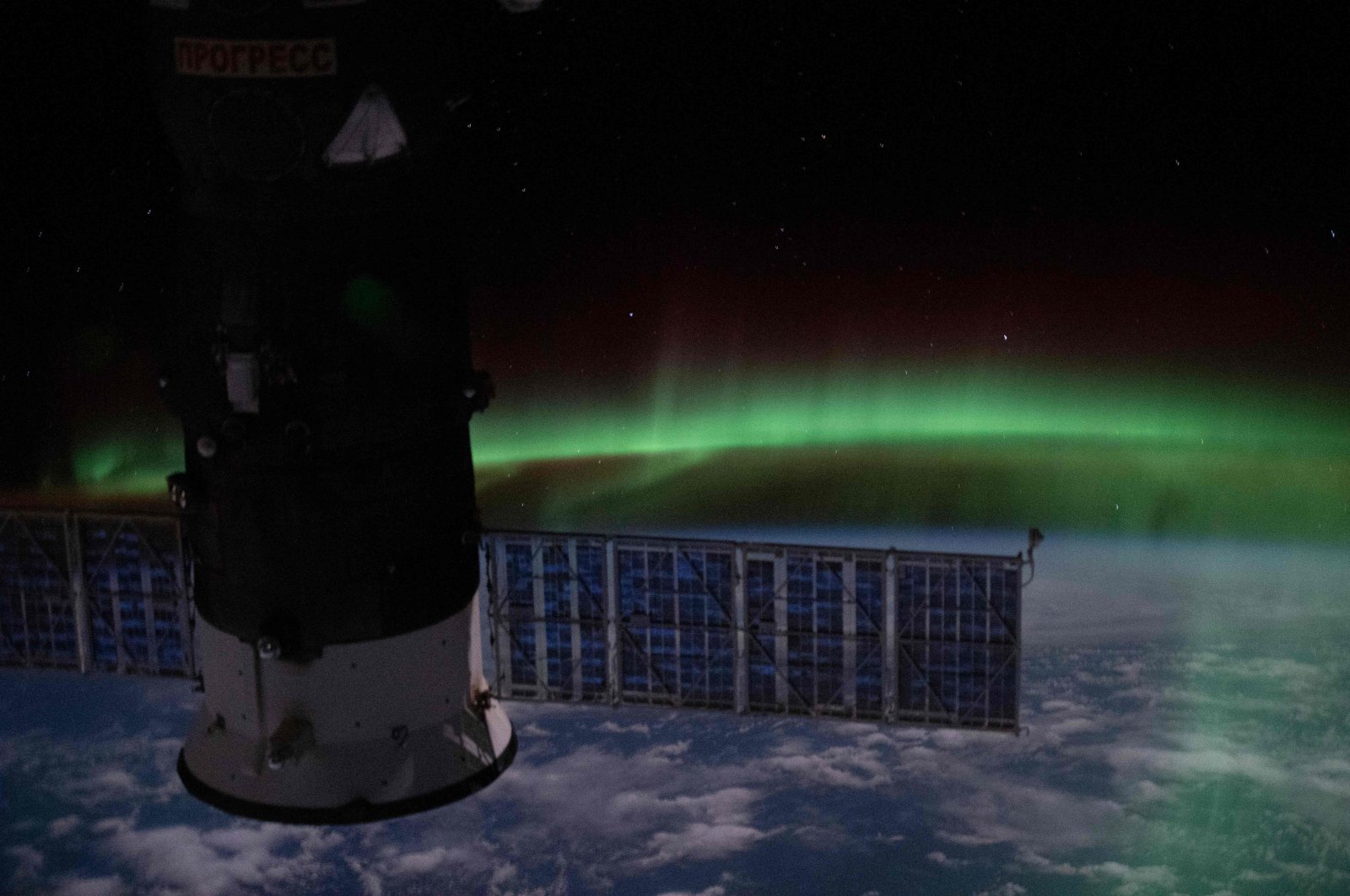 This handout photo released June 10, 2020, shows an orbital nighttime view from the International Space Station as it orbits above the Indian Ocean with the "aurora australis" and a starry sky with Russia's Progress 74 resupply ship in the foreground on June 7, 2020. (NASA via AFP)
by French Press Agency - AFP Jun 11, 2020 12:14 pm
RECOMMENDED

Scientists have observed the fifth state of matter in space for the first time, offering unprecedented insight that could help solve some of the quantum universe's most intractable conundrums, research showed Thursday.

Bose-Einstein condensates (BECs) – the existence of which was predicted by Albert Einstein and Indian mathematician Satyendra Nath Bose almost a century ago – are formed when atoms of certain elements are cooled to near absolute zero (0 Kelvin, minus 273.15 Celsius).

At this point, the atoms become a single entity with quantum properties, wherein each particle also functions as a wave of matter.

BECs straddle the line between the macroscopic world governed by forces such as gravity and the microscopic plane, ruled by quantum mechanics.

Scientists believe BECs contain vital clues to mysterious phenomena such as dark energy – the unknown energy thought to be behind the universe's accelerating expansion.

But BECs are extremely fragile. The slightest interaction with the external world is enough to warm them past their condensation threshold.

This makes them nearly impossible for scientists to study on Earth, where gravity interferes with the magnetic fields required to hold them in place for observation.

On Thursday a team of NASA scientists unveiled the first results from BEC experiments aboard the International Space Station (ISS), where particles can be manipulated free from earthly constraints.

"Microgravity allows us to confine atoms with much weaker forces since we don't have to support them against gravity," Robert Thompson of from the California Institute for Technology, Pasadena, told Agence France-Presse (AFP).

The research published in the journal Nature documents several startling differences in the properties of BECs created on Earth and those aboard the ISS.

For one thing, BECs in terrestrial labs typically last a handful of milliseconds before dissipating.

Aboard the ISS the BECs lasted more than a second, offering the team an unprecedented chance to study their properties.

Microgravity also allowed the atoms to be manipulated by weaker magnetic fields, speeding their cooling and allowing clearer imaging.

Creating the fifth state of matter, especially within the physical confines of a space station, is no small feat.

First, bosons – atoms that have an equal number of protons and electrons – are cooled to absolute zero using lasers to clamp them in place.

The slower the atoms move around, the cooler they become.

As they lose heat, a magnetic field is introduced to keep them from moving and each particle's wave expands, cramming many bosons into a microscopic "trap" that causes their waves to overlap into a single matter wave – a property known as quantum degeneracy.

The second the magnetic trap is released in order for scientists to study the condensate, however, the atoms begin to repel each other, causing the cloud to fly apart and the BECs to becomes too dilute to detect.

Thompson and the team realized that the microgravity onboard the ISS allowed them to create BECs from rubidium – a soft metal similar to potassium – on a far shallower trap than on Earth. This accounted for the vastly increased time the condensate could be studied before diffusing.

"Most importantly we can observe the atoms as they float entirely unconfined (and hence unperturbed) by external forces," Thompson said.

Previous studies trying to emulate the effect of weightlessness on BECs used airplanes in free fall, rockets and even apparatus dropped from various heights.

"Applications range from tests of general relativity and searches for dark energy and gravitational waves to spacecraft navigation and prospecting for subsurface minerals on the moon and other planetary bodies," he said.