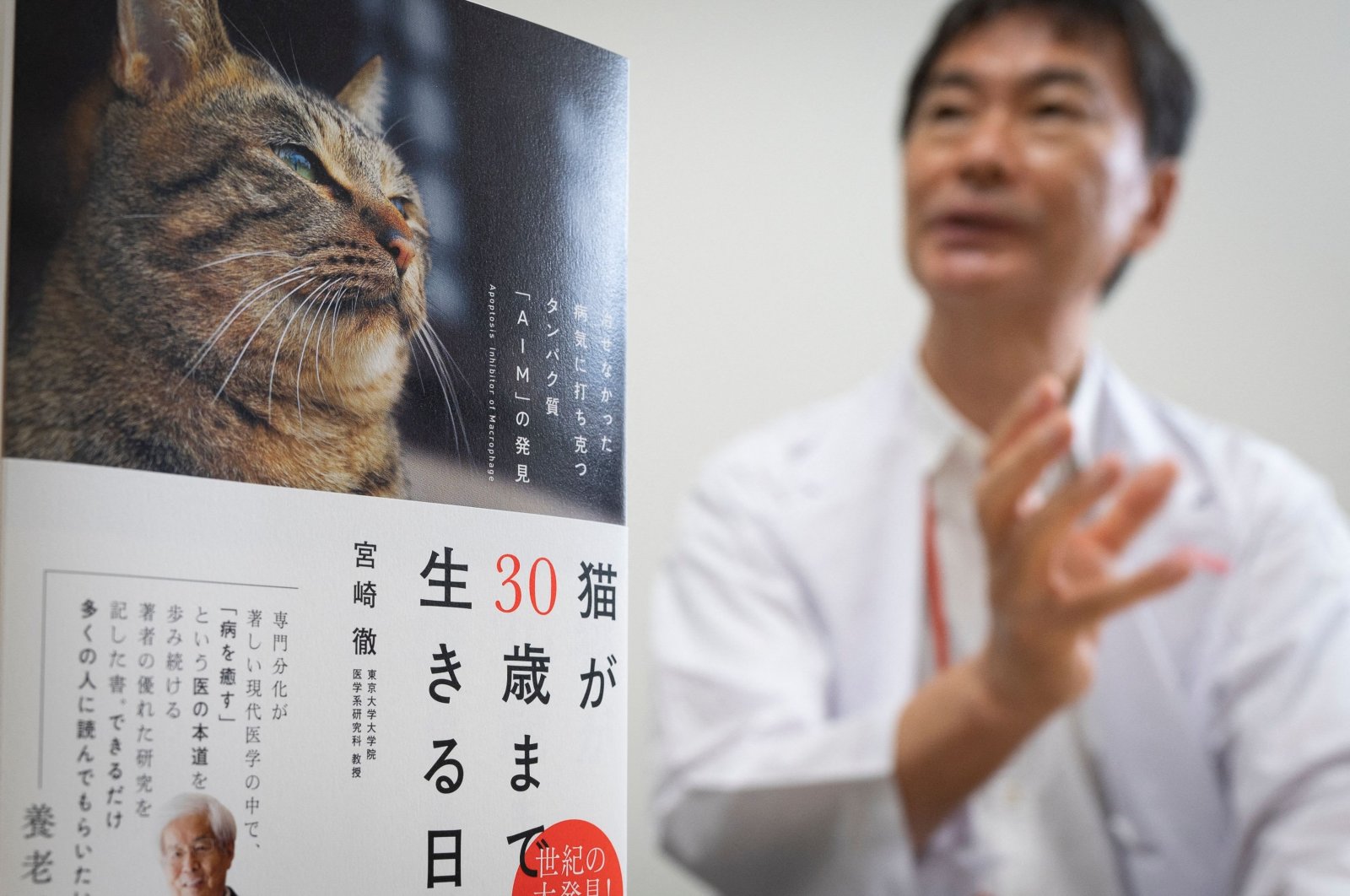 Immunology professor Toru Miyazaki explaining his study behind a copy of his book (L) during an interview with AFPBB News at the University of Tokyo, Tokyo, Japan, July 30, 2021. (AFPBB News via AFP)
by French Press Agency - AFP Sep 14, 2021 3:34 pm
RECOMMENDED

Cats are famous for their nine lives, but like all of us they have just two kidneys – and it is a well-known fact that cats' kidneys often prove to be their untimely and unfortunate demise. So, cat lovers in Japan have banded together and donated nearly $2 million to research a cure so that their feline friends can live longer and prosper.

As the coronavirus pandemic hit the economy last year, scientists at the University of Tokyo lost their corporate funding for a study on preventing kidney disease in cats.

But thousands of Japanese cat lovers mobilized online to donate to the researchers after an article about their plight by news agency Jiji Press went viral.

"I lost my beloved cat to kidney disease last December ... I hope this research will progress and help many cats to live without this disease," one woman wrote in a message alongside her $20 donation.

Another donor, who gave $90, said: "I recently got a kitten. I make a donation in the hope that it will be in time for this cat."

Domesticated cats and their bigger cousins in the wild are highly prone to kidney problems because of a genetic inability to activate a key protein discovered by the Tokyo researchers.

The protein called AIM helps clean up dead cells and other waste in the body, preventing the kidneys from becoming clogged.

Immunology professor Toru Miyazaki and his team are working on ways to produce the protein in a stable quantity and quality.

They hope to develop a new remedy they say could double the current feline life expectancy of roughly 15 years.

"I hope that ultimately veterinarians will give (cats) jabs every year like vaccines," Miyazaki told the AFPBB News, an affiliate of Agence France-Presse (AFP).

"It would be good to give them one or two doses every year" of AIM, he said.

Around 3,000 unsolicited donations were sent to the team hours after the article was published in July.

This surged to 10,000 in just a few days – more than the total number of donations the university usually receives in a year.

And by mid-September, the amount donated had reached 207 million yen ($1.9 million).

"It was the first time I understood first-hand how much my research is anticipated," said Miyazaki.

His team's research on how AIM – short for apoptosis inhibitor of macrophage – functions in the body was published in 2016 in the journal Nature Medicine.

They are also developing pet food containing a substance that could help activate the non-functional AIM in feline blood.