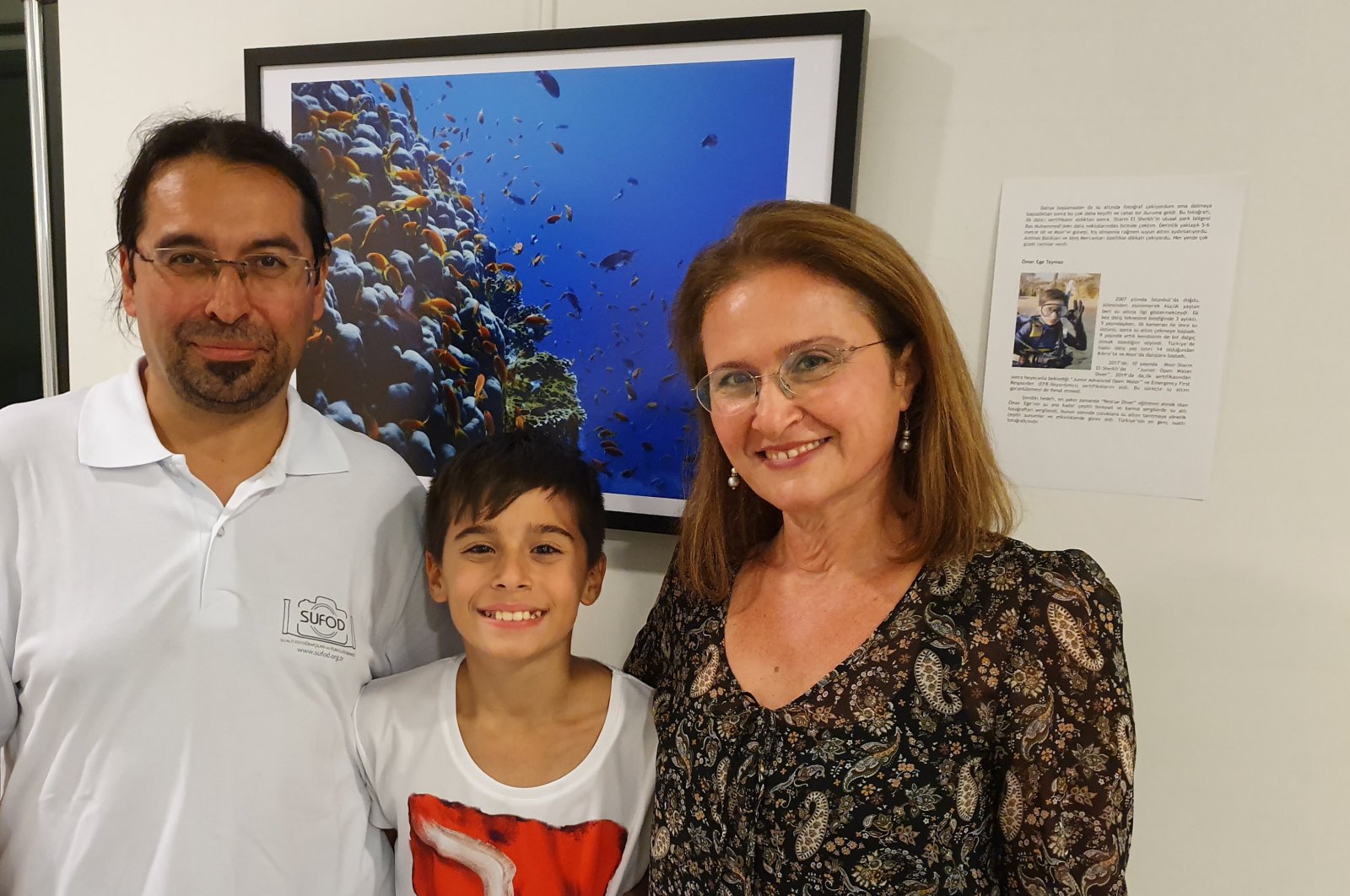 Tolga (L), Ömer Ege (C) and Bahar Taymaz (R) pose in front of one of the many underwater photos they have taken. (All photos courtesy of Tolga Taymaz)
by Yasemin Nicola Sakay Mar 11, 2020 12:10 pm

One can't help feeling envious of the Taymaz family: This band of underwater photographers is bound together not only by familial love and affection, but a shared fanaticism for all things maritime. Stirred by his parents' aquatic obsessions, the youngest member of the Taymaz family, Ömer Ege Taymaz, has since followed in their footsteps to become Turkey's youngest underwater photographer.

Let’s go back to the beginning. It was a warm summer’s day in 2001 when Tolga and Bahar Taymaz got engaged, with the ceremony – of course – taking place underwater (indeed, love might not be in the air so much as the water!).

“Water had always been an important part of our lives. If we spotted any kind of water source along the course of one of our trips, we would be in it within minutes,” joked Tolga Taymaz.

No wonder little Ömer Ege picked up on the hobby so quickly; it was almost as though he was born into it.

“He used to join us on our diving trips when he was as young as 3 months old,” said father Taymaz. Before you ask, no, they weren’t crazy parents that made their baby go diving with them, but little Ömer Ege was there on the diving boat, right by their side, watching his parents' every move from the comfort and safety of the captain’s lap.

Once Ömer Ege turned 4, that’s when his real affection for the sea washed over him, and when he was gifted his first underwater camera a year later, it was impossible to stop him from taking photos and experimenting with taking snaps in rivers, lakes, the sea, or wherever the family's journeys took them.

“We don’t really have a specific season we go diving in. Luckily, we live in a country where you can dive all year round, no matter what month or season," Tolga Taymaz said.

That was one of the reasons why Ömer Ege Taymaz always had fellow divers around him. One of these was his father, who also took photos underwater, and another was his mother, who did video work.

“We would always be swimming with him in our breaks,” Tolga said.

Then one night in May 2013, in Kaleköy, Antalya, Ömer Ege Taymaz waded into the sea, took out his small camera and flashlight, and pressed the shutter. “He wasn’t even 6 yet,” his father fondly recalled.

From there on, whenever the visibility was good and the water was clear, Ömer Ege Taymaz would go and take photos of his lego creations and other toys underwater, not to mention the sea creatures that emerged from beneath the blue.

“We would tell him stories about our diving experiences in sunken aircraft while he would play and photograph his toys in pools, the waters of the Greek islands, or Kaş and Kaputaş (both in Antalya).”

From the age of 5, he witnessed how freshwater traveled to the surface in places where the water was just a few inches deep and remarked upon what magnificent views it created. This realization occurred specifically along the banks of the Büyük Menderes River (historically, the Maeander). A few years later, he started using his camera in the knee-high waters of the Sakarya River.

He learned that he must listen to what boaters and local people said about the water and weather. If the conditions – such as water current, weather or other local factors – were suitable, he would go swimming with his parents, making observations while snorkeling and wondering about what lay just out of sight in the depths below. Once he hit 8, he started asking the inevitable: "When will I go diving?"

There are several diving federations in the world, such as Scuba Schools International (SSI), the Professional Association of Diving Instructors (PADI) and the World Underwater Federation (CMAS). In official diving guidelines, there are provisions dedicated to diving for children that state that the age of 8 is appropriate to start training and that if the child successfully passes the necessary theoretical and practical training by age 10, they can receive the "Junior Open Water Diver” certificate, Tolga Taymaz said. However, each country has its own official federations related to underwater activities, and these national federations set the underwater standards that must be followed in the respective countries.

In Turkey, the minimum age for diving is 14. Anything below this threshold is considered illegal.

“When Ömer Ege went diving for the first time, he was 8 and we were in Egypt. He started to acquire theoretical knowledge about scuba diving and try out some of the exercises allowed by diving federations abroad. The fact that he could swim in Sharm El Sheikh right in front of the main street, seeing the extraordinary liveliness and vivid colors on the shore, on top of the extraordinary sights he saw underwater at night, inspired him even more," Tolga said.

Equipped with his little camera, he set about learning how to take pictures and how to avoid coral and harmful creatures in the process.

After a while, all the moving, installing and dismantling of underwater photography and filmmaking equipment, which weighed about 30 kilograms, were things he became extremely familiar with.

“Later, I completed my training in the SSI system and became a certified trainer within the Dive Safety Network Association – Divers Alert Network (D.A.N.),” Tolga Taymaz said, adding that he and Ömer Ege, 10 at the time, started to go diving together after his son received his internationally recognized junior diver certification from Egypt.

Shortly after, their diving adventures lead them to Cyprus. Due to age limitations, Ömer Ege Taymaz was still unable to advance to the next level, so he had to wait it out.

"The day he turned 12, we rushed off to Egypt, this time for him to become a junior advanced open water diver. While we were there, he also got his first aid training to be a certified first responder," Tolga Taymaz said.

Not long after, Ömer Ege Taymaz told his family that he wanted to go back to receive his next training to become a junior rescue diver. From courses on underwater physics, physiology and mechanical knowledge, to instruction on medical conditions and stress management, he underwent rigorous training and passed countless exams.

"He completed the practical side of his first aid course with people almost twice his weight. Meanwhile, on the side, he continued shooting with me underwater,” father Taymaz said.

But is it that easy to get started in underwater photography?

"If you asked me this question 20 years ago, I'd be giving many different answers. I was born in 1970, so naturally I started photography with analog systems and I used those underwater. But with the advance of technology, a wide range of solutions were created for different needs," Tolga Taymaz said.

Nowadays there are endless options out there – from more budget-friendly options to niche and lavish systems. "It is all about what the person strives to achieve," Tolga said.

“It all depends on what you want to do; you may just want to take pictures or videos while swimming, or while you are passing under a waterfall or while diving a few meters while holding your breath," he added.

Tolga Taymaz said one caveat is that the deeper you get into this hobby, the more knowledge you need to have and the more advanced your skills related to photography or filmmaking and diving need to be.

"There will always be new parts you'll want to add to your underwater imaging system,” he said, which means more expenses and a level of knowledge that must evolve with it.

In addition, divers must know everything there is to know about the area they plan to go diving ahead of time, including what the situation is like underwater in different seasons, what to expect during different times of day, the angle of the light and the characteristics of the creatures living there.

Both father and son say both the act of taking photos and diving are their true passions.

"I first remember wanting to be a diver at age 8 or 9 when I was watching black and white documentaries by Jacques-Yves Cousteau. I have always loved the sea since childhood, but I must say that I was a bit disappointed when my family got me my first underwater mask, as when I looked into the Marmara Sea I did not see the images I saw in those documentaries," said Tolga Taymaz.

Tolga said he was fascinated by cameras even at primary school, and he underwent scuba diving training in 1997. After that, it was only a matter of time until both of his passions converged. Ömer Ege Taymaz echoed similar thoughts.

"My interest in the underwater world piqued the more photos and footage my father and mother showed me. The underwater world is already a fascinating place, so every animal I shoot fascinates me – and frankly, I was never afraid of the creatures I shot. My mom and dad always abided by the rules so there was nothing for me to be afraid of," he said.

One would think that carrying the title of Turkey's youngest underwater photographer creates immense pressure; however, Ömer Ege Taymaz dismisses such thoughts. In fact, he claims to be honored, saying: "It makes me very happy."

"The only problem I have is that none of my friends have an interest in this field, so I don't really have someone to share my experiences with," he said.

Despite the isolation he sometimes feels due to the unique nature of his passion, it seems that Ömer Ege Taymaz is destined to continue to strive on in aquatic life. He said: "My next goal is to become a divemaster, and continue to improve myself gradually."