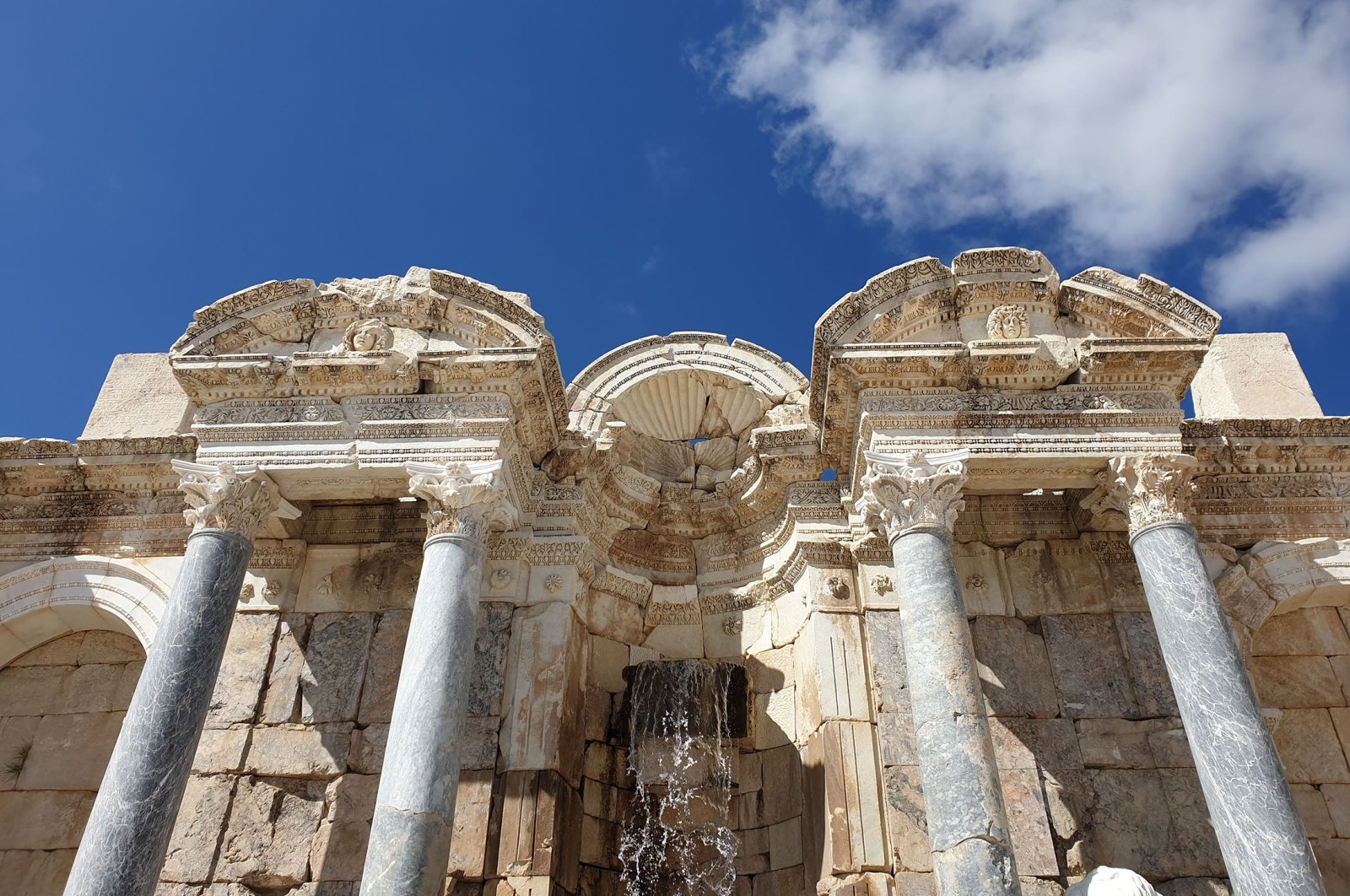 These natural, historic and cultural sites in Turkey are waiting to be included in the permanent list of UNESCO World Heritage Sites and it's not hard to see why they are worthy

UNESCO lists over 80 sites in Turkey that are of historical and cultural significance in its Tentative World Heritage Sites List, in addition to the 18 cultural and natural treasures already inscribed on the permanent list.

If you are interested in exploring some of the lesser-known places in Turkey that aren’t flooded by tourists year-round, the sites on the tentative list are a great place to start. In this article, we will go over 14 of these, in various parts across the country, that are worthy of being on your travel bucket list for years to come.

Up in the Karadağ ("Sou Mela" in Greek, meaning “Black Mountain”) south of Trabzon you will find one of the Black Sea region’s greatest marvels, the Sümela Monastery.

Carved into the steep cliffside of the mountain 300 meters (984 feet) above the picturesque Altındere Valley, this Greek monastery was dedicated to the Virgin Mary and believed to have been constructed by two Greek monks in the late fourth century.

While it was closed for restoration for four years, it reopened for tourists in 2019 and offers an observation deck that gives you a panoramic view of the entire monastery and the breathtaking valley below.

A short drive away from the breathtaking ancient city of Myra is the church of St. Nicholas of Myra, better known as Santa Claus, an attraction for tourists and pilgrims alike.

The church was constructed in A.D. 520 and is memorable for its remarkable wall paintings and frescoes, as well as being the burial place of St. Nicholas.

Unfortunately, today, you won’t be able to pay your respects directly as his body was taken by two tomb raiders from Bari, Italy in 1087. However, the church and its open-air museum is a grand and unique sight on their own.

A scenic drive high up the Taurus Mountains in Burdur is one of the best-preserved ancient cities in Turkey.

Sagalassos, with its history stretching back to the Hittites in the second century B.C., was the first and wealthiest city of ancient Pisidia, and a stunning example of Greco-Roman architecture and beauty.

It was abandoned in the seventh century after a series of unfortunate calamities, but visitors today can still see the well-preserved agora and the breathtakingly beautiful and functioning fountain bordering it.

Site maps are present throughout the city, offering walking paths of various durations accommodating tourists with time constraints. This is certainly one of the most unique places on this list.

Home to one of the most well-preserved temples in Turkey, dedicated to the Greek god Zeus, Aizonai is easily comparable to Ephesus in its grandness and importance.

Initially inhabited by the Phrygians, the area was converted into a city in the first century B.C. by the Romans and includes unique spots such as a temple; four roman bridges, two of which are still in use today; the world’s first known indoor marketplace, with inscriptions of the prices of goods sold still visible on the walls; theaters; roman baths; and an ancient sacred cave.

Hacı Bektaş Veli is a revered Sufi saint and philosopher who spread his teachings in Anatolia and is the eponym of Bektashism, a religious order of Alevism.

The Hacı Bektaş Veli Complex was built in the 13th century in what is now Hacı Bektaş, Nevşehir as a seminary for his teachings and is the site of his mausoleum today. The complex receives thousands of visitors yearly, most of them religious tourists who come to pay their respects.

The complex now serves as a museum where tourists can learn about the history of his teaching and explore its unique architecture and beautiful courtyard and gardens.

You’ll need to take a boat or ferry to see this church that’s located in the middle of the largest lake in Turkey, Van Lake.

Akdamar Church was commissioned to be built by King Gagik of the Armenian Vaspurakan dynasty in the 10th century. The cathedral is the only remaining structure of the settlement the king had established on the island, and although it was vandalized and deserted in the past few centuries, it has been restored and is known for its beautifully carved relics that depict biblical stories and scenes from daily life.

Considered some of the oldest relics and frescoes in the region, this cathedral is of special importance in Armenian history.

In the open plains of Ağrı in the east of Turkey is one of the last remaining and best surviving examples of a Turkish palace, constructed by Ishak Pasha, a Georgian general, in the 18th century.

The palace is more of a complex, containing a harem, baths, a mosque, dungeons and a central heating system. The interior and exterior design of the palace reflects Ottoman, Persian and Seljuk architectural styles and is a marvel to look at.

It was the second-most important administrative palace after Topkapı Palace in Istanbul, and its grandiosity is a testament to that.

Once you climb up the steep staircase that takes you 80 meters (262 feet) above the ground, you’ll be confronted with the large mouth of Karain Cave and views of the surrounding agricultural fields that archeologists believe were once a large lake.

The history of this cave goes back at least to Paleolithic times, nearly 200,000 years ago. It is thought to have been inhabited continuously for 25,000 years, up to the Iron Age, when it was used for religious purposes by the Greeks, as shown by the carvings along the walls.

While it is strictly forbidden to pick up anything from the cave, many visitors might be able to spot rocks scattered around that show early stone tool making.Don’t miss the face carved on the wall of the cave either and be sure to visit Antalya Archeology Museum to see other prehistoric artifacts discovered in the cave.

Located west of the resort town of Dalyan, the ancient city of Kaunos is still relatively unpopular. However, that is in no way indicative of how impressive, unique and well-preserved the city and its iconic tombs are.

The city was likely founded in the fifth century as a Greek settlement in Caria. Its symbolic tombs are carved into the cliffside overlooking the ancient harbor and make up only a few of the 170 that exist in the necropolis. The city also offers picturesque views of the Mediterranean coast and can easily be accessed by tours.

While the tombs are easily the most attractive feature of this city, tourists should not miss out on the magnificent theater and the early Byzantine church, a particularly well-preserved example of its kind, that is nearly 2,000 years old.

The city of Mardin is located in southeast Turkey and is a spectacular example of Artuqid (Artuklu in Turkish) architecture.

The Artuqid dynasty ruled eastern Anatolia from the 11th to 13th centuries and constructed most of the historic buildings that make up the old city of Mardin that rests on the hillside, with the Mardin castle at the top.

While there are countless historical sites to see in the city, like the Zinciriye Madrassa, the Forty Martyrs Church, the city museum and bazaar and a beautiful post office, it’s also worth taking a short trip to the outskirts of the city to see Deyrulzafaran, the 1,000-year-old monastery.

Termessos is one of the most exquisite ancient cities in Antalya, located 1,000 meters above sea level, nestled in the dense forest of Güllük Dağı National Park in the Taurus Mountain Range.

As challenging as it can be to trek through the steep terrain, Termessos offers some of the most unique structures in any ancient city, especially its beautiful but daunting amphitheater built on the edge of the cliff, which offers amazing views of the mountains and the city.

The city is quite big and will require a few hours of exploring perhaps to see all its temples, the colonnaded street, agora, baths and necropolis. If you have it in you, make the climb further up to see Alcetas’ Grave to see the beautiful carvings on the wall.

This 13th-century mosque, located by Beyşehir Lake in Konya, is unique in many ways. While it might not look extraordinary from the outside, step inside and you will be amazed by the unique amalgam of wooden, ceramic and brick infrastructure.

UNESCO has labeled it as the biggest and best-preserved wooden mosque in the Islamic world, and this is remarkable considering that the wood used for the roof and columns has not shown any signs of decay compared to other Seljuk period wooden buildings that have not survived.

This mystery adds to the allure of this church, in addition to the beautiful paintings and frescoes on the ceiling.

This 2,000-year-old tunnel is like no other. Built by the Roman Emperor Vespasian for the ancient city of Seleucia Pieria in modern-day Antakya, and then later completed by his son, Titus, the tunnel was built to divert floodwaters that would often render the port inoperative and is considered an engineering marvel of its time.

Its ability to impress doesn’t end there as the entire tunnel was built by digging out rocks by hand. The mysterious ambiance inside the tunnel makes it a must-see spot if you’re in the area.

The ancient Armenian town of Harput is located near Elazığ in the east of Turkey. While it is most famous for the majestic Harput Castle, established by the Urartus as a fortress nearly 2,000 years ago, Harput’s history dates back to 2000 B.C. and includes a museum housing artifacts found in the area, churches and mosques.

Another notable site that can be visited after a 10-minute drive north of Harput is Buzluk Cave, known for its natural ice formation during the hot summer months. It is one of the few of its kind in the world, where the natural geomorphological features of this cave and the underground airflow allow this cave to be hot during the winter and cold during the summer.