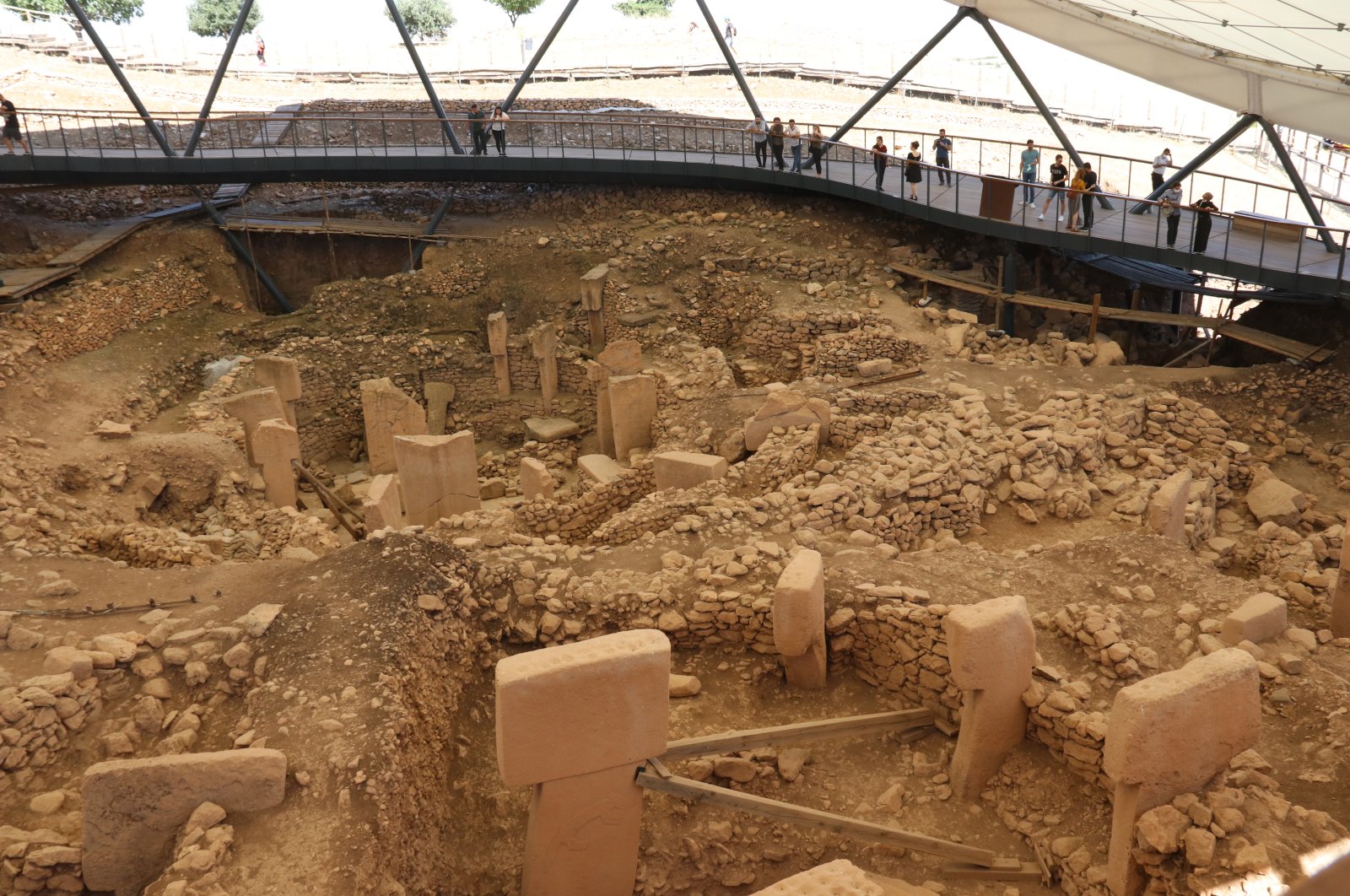 The ancient Göbeklitepe site was discovered in 1963 by researchers from the universities of Istanbul and Chicago. (AA PHOTO)
by Anadolu Agency Jun 14, 2020 1:50 pm
Edited By Irem Yaşar

The Göbeklitepe archaeological site, described as "the ground zero of world history" stretching back 12,000 years, has seen a hike in the visitor numbers since its reopening in line with Turkey's normalization process

Göbeklitepe, a UNESCO-protected archaeological site in Turkey's southeastern Şanlıurfa province, has welcomed around 2,000 visitors in the first week of Turkey's post-coronavirus normalization process.

“Dubbed the ground zero of history,” the 12,000-year-old site, which is visited by a large number of local and foreign tourists every year, experienced a golden age in tourism last year after President Recep Tayyip Erdoğan declared 2019 "The Year of Göbeklitepe." In 2019, the site experienced a significant boost in interest, breaking all records with 412,378 visitors.

Göbeklitepe was closed to visits for about three months following the coronavirus outbreak, yet remained the most visited historical site online throughout the pandemic thanks to a virtual museum application introduced by the Ministry of Culture and Tourism. The site itself has since begun to welcome guests in accordance with the rules of observing mask-wearing, social distancing and hygiene as per the normalization process that began in Turkey on June 1.

In just the first 10 days since the end of the hiatus was announced, already around 2,000 people have visited Göbeklitepe, in a hopeful sign for the future of local tourism. Tourism enterprises based around the site, which became a tourism favorite after “The Year of Göbeklitepe," are happy to be able to serve visitors again.

Optimistic about future
In an interview with Anadolu Agency (AA), Müslüm Çoban, president of Şanlıurfa Regional Tourist Guides Chamber, said that they were happy that Göbeklitepe, which is a favorite place both in Şanlıurfa and Turkey, has opened its doors again after a long break.

Çoban said: “We, as tourist guides and travel agencies, have taken the necessary precautions. We continue to work on informing our guides. We are expecting to welcome all visitors who have not yet had the opportunity to come to our city since 2019's 'Year of Göbeklitepe' was announced.”

Pointing out that the pandemic process has led to a hike in certain costs, Çoban noted: “We have come together as tourism professionals in Şanlıurfa and everyone has shouldered the responsibility to avoid price increases being passed on to visitors. We are expecting many of our citizens who have been resting indoors for about three months to come to see Şanlıurfa and Göbeklitepe.”

According to Çoban, 400,000 people visited Göbeklitepe in 2019. “It might be difficult to keep up with these figures due to this process, but even tourists arrived from Spain on the first day it was opened to visit,” he added.

Çoban stated that there was a great demand for Göbeklitepe last year, but that some visitors could not visit due to difficulties finding accommodation, adding: “We are expecting the arrival of those who could not come last year. We have many interested parties who call us, saying that they want to come. Many travel agencies have started to announce tours for Şanlıurfa and Göbeklitepe. We welcome all to Şanlıurfa – the best is yet to come.”

Ömer Faruk Karınca, general coordinator of a hotel in the city, stated that they had seen a significant increase in occupancy rates after June 1, adding: “Although it was the first week, the increase in the number of guests pleased us. Our meetings with tourism agencies revealed that bookings have already increased significantly because Göbeklitepe has been the most visited ancient city online throughout the pandemic process thanks to the virtual museum application. I think that the number of visitors to Göbeklitepe will increase gradually in 2020 and 2021.”

Funda Yakmaz, a visitor from nearby Gaziantep, said that she had come to Şanlıurfa before, but that this is the first time she had seen Göbeklitepe. She said that she had wanted to see Göbeklitepe this year, but could not come due to the pandemic, noting: “This place is perfectly safe and all necessary precautions have been taken. The officials are helping us and I thank them all. We are wearing masks and paying attention to social distancing rules.”

Göbeklitepe is considered the birthplace of some of humanity's earliest civilizations and attracts millions of local and foreign tourists each year.

The site was discovered in 1963 by researchers from the universities of Istanbul and Chicago. The German Archaeological Institute and Şanlıurfa Museum have been carrying out joint excavations at the site since 1995. The most significant discovery of the excavations is T-shaped obelisks from the Neolithic era towering 3 to 6 meters (10 to 20 feet) high and weighing 40 to 60 tons.